As many of you know, my son Christopher is leaving for a semester abroad in Chile, literally within hours. As you can imagine, things around here are a bit… stressed. His mother was just in here literally crying on my shoulder… at the thought of her son being gone for the next six months.

My emotions, well let’s just say I’m too distracted to really be emotional about Christopher. Why? Because I am really angry at the shipper UPS right now to be worried about my son. In fact, until UPS finds their ass with either hand Christopher won’t be going anywhere.

Let me start at the beginning. For some reason we did not receive notification of WHERE Chris was going until very late. Right before Christmas in fact. Usually exchange students are notified several months in advance… maybe Chris was slow to get picked because he’s a boy (I noted in the orientation that the female/male ratio of exchange students was literally 20/1!) Who knows.

The process for getting a Student Visa usually takes a few months. In our case we had weeks, and those weeks started with the Holidays, so we were already behind. The hoops we had to jump through were numerous; A new US passport, criminal background checks from the State Police and FBI, immunizations, blood tests for various diseases such as HIV, letters from Chile, letters from AFS in NYC, fingerprints, etc. All these bureaucracies had to get their paperwork in order (and take their fee) BEFORE we could submit his passport to the Chilean Consulate for a visa.

I tried, when I was down in San Francisco in early January to sweet-talk the Chilean Consulate out of a visa, with incomplete paperwork, with zero luck. My previous experience with obtaining visas (when we moved to the UK) was much simpler, though almost as stressful, and BEING THERE counted for more than paperwork back then. I left SF empty-handed, but with a clearer picture of what we had to get done.

As of two weeks ago, we still had not received ALL our paperwork, but all we were missing (I think) was the FBI CHC. Sue went to the UPS store in Colorado where we were visiting my parents and overnight-shipped everything that we had to the Chilean Consulate in San Francisco, with a pre-paid envelope addressed to our house for return. I spent all last week calling and emailing the consulate to help push the process through. FINALLY on Thursday I was able to speak to the lady there (who sent me away in January) and convinced her that time was running out and we needed to get things wrapped up ASAP. She agreed and with some calling and faxing back and forth we got the visa arranged, approved, and returned in record time. There was still some paperwork we had to fill out when it arrived and get back to her prior to his departure so it was up to UPS to deliver. I specifically asked her, and confirmed that we had checked off the package for Saturday delivery. I knew we were cutting it close, but with the wonders of overnight shipping, I was confident it was well in hand.

I watched in satisfaction as the package tracking website followed it towards us…. but then… 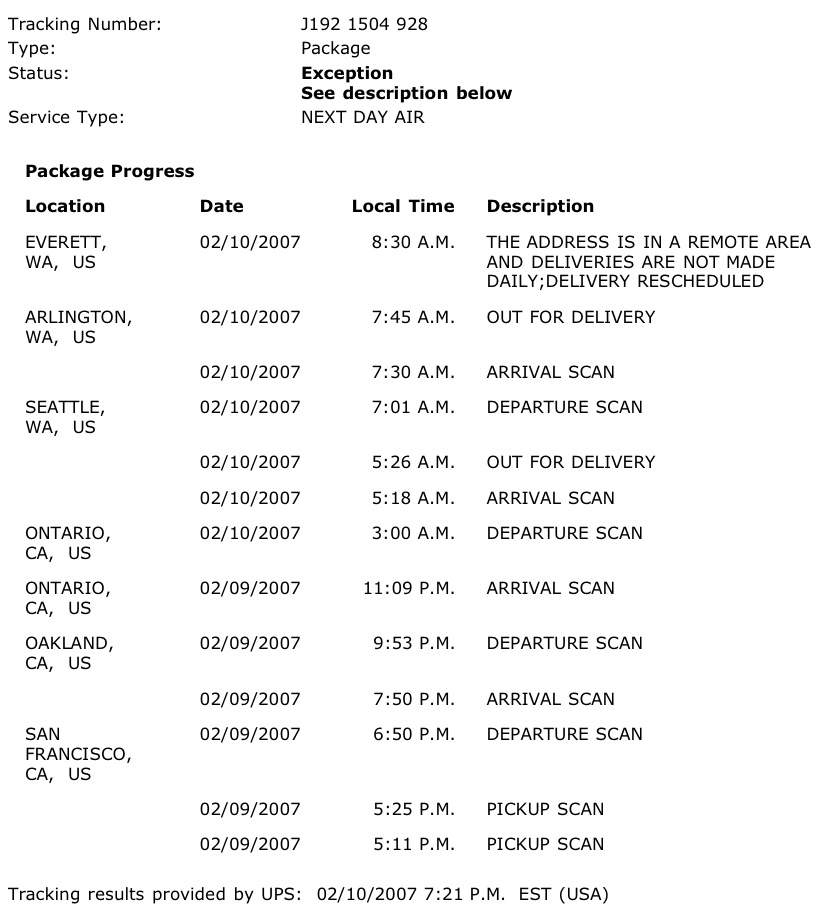 What do they mean “remote area”?? I see the UPS trucks here in Arlington Heights all the time. Other than the fact that they deliver packages to our house destined for a family one block to the east all the time, they’ve never had any trouble finding OUR HOUSE. Even on Saturdays!

Try calling that number (1-800-742-5877) and see what happens. They have one of those ULTRA annoying automated attendants that tries to do everything in its power to stop you from talking to an actual human being. Go ahead and call and say my tracking number: J192 1504 928 It will tell you there isn’t a damn thing new about it and they can’t deliver it. Sorry.

I keep hitting “0” until the automated attendant gives up and transfers me to a human. At first it seems like we’re going to make some progress. I explain to the human that this package contains a passport, for a family member who will be travelling internationally very soon and that we specifically requested, and paid for ($23.32) Saturday delivery. They tell me that they will call the package center and that they will message the driver, and finally, that a Supervisor will call me back within an hour. They get all my contact details, and I hang up, happy.

One hour and fifteen minutes go by.

I call again. This time, the automated annoyer won’t let me get past “her” and basically says “There is no new information about your shipment, please call back later” and hangs up on me!! Grrr.

I call back, press “0” enough times to get to a human. The human apologizes that I haven’t received my promised call, and informs me that he will follow through and see that I get a call, within an hour. Like an idiot, I take his word and hang up.

Another hour+ goes by.

I call again. Once again, I enter the fray with the Automated Annoyer. She speaks to me in a condescending tone, but I finally manage to get past her and to an actual human. Well, I suspect they are actual humans, I really can’t know. The hum of the call center is in the background and this human tells me that at the moment, there is nothing that she can do to help… I’ll just have to wait for the Package Center Supervisor to call me back, as promised. I explain to her the critical nature of this delivery, and she assures me that somebody WILL call me back. I just need to be patient.

Well, I’m nothing, if not patient, so I hang up the phone and stare at it for the next 120+ minutes while it sits there … and does nothing. No ring. No call. More promises broken. It is now afternoon, and my patience is wearing thin. I call once again. My entanglement with the super-sticky automated attendant finally passed, I end up with a human being. I relate the whole story once again. I offer to drive anywhere they need me to go, Arlington, Everett, even Seattle, so I can get this package into my hands. Nada, nothing. All I get is an excuse that this truck was not reachable and that the delivery would be rescheduled for Monday. I explained to them the nature of the situation, and how that would be unacceptable. I paid for Saturday Delivery, the lady at the Consulate specified Saturday Delivery, and here it was Saturday, and where was my delivery? Then the human being, whose title I can only assume has the words ‘Customer Service’ somewhere in it said something that finally made me, the one of the world’s most calm and patient people, go completely bonkers:

“Can you call the Consulate?”

I paused for a second to consider the completely illogical statement that I just heard.

(pardon the all caps, but in this case it is really required…)

The moron kept blubbering excuses and apologies while I frankly… lost it.

“I RUN A 24/7 OPERATION, I KNOW WHAT IT TAKES TO GET STUFF DONE, EVEN ON A WEEKEND. IF I RECEIVED A CALL FROM A CUSTOMER, COMPLAINING OF A FAILURE OF MY STAFF, I WOULD BE DOING WHAT I COULD TO FIX THE PROBLEM… NOT TELL THEM EXCUSES… SO WHAT ARE YOU GOING TO DO TO FIX THIS??

My family, who has never seen me act like this, all ran to the basement and cowered in fear.

“WHY WOULD I EVER TRUST UPS WITH MY BUSINESS, EVER AGAIN?? WHY CAN’T YOU CALL SOME MANAGER AND GET THIS PROBLEM SOLVED RIGHT NOW? WHY HASN’T ANYONE THERE CALLED ME BACK, DESPITE REPEATED PROMISES TO DO SO? WHY IS THIS SO DIFFICULT??”

Finally, I asked to speak with a supervisor. She asked me if I would hold on, I said “gladly.”

The same human being comes back on the line and says “There isn’t a supervisor available right now, but let me get your details and I’ll have one call you right back.”

I reminded her that I’ve heard that same promise many times so far this day and nobody has yet to call me back.

She PROMISES. So I give both my home number, AND my cell phone, saying that if I’m not at one, I’ll be at the other.

Boy, was that stupid. I can picture it now, all the UPS “customer service” people all snickering behind the castle wall, as they prepared to launch a cow off their catapult at me.

Meanwhile, the entire Goolsbee family climbed into Sue’s car and went to Everett on an errand. Silly me expected to hear from a UPS representative and maybe we’d be able to swing by Arlington, or maybe Everett and pick up our package. I figured that these people would actually live up to their promises. Do what they said they would do. Perform the task I had paid them to do. Make good their errors, fix their mistakes, heal the wound they had inflicted. Obviously, I was delusional.

No call ever came. We returned home, and no call had come there either. I made one last try while the calendar still said “Saturday.”

This last call was pretty much a repeat of the previous one, except that I didn’t yell (as much) until the stupid thing that this ‘Customer Service’ person said: “It is too late now. If you had called earlier…”

“I DID CALL EARLIER… I’VE BEEN CALLING SINCE 9 AM! I’VE BEEN PROMISED CALL BACKS SINCE…. Etc, etc, etc.”

I did manage to get this guy’s name though: Nathan Magilow. I asked Nathan to transfer me to a supervisor, and he basically refused. He said there was nothing anyone could do. All the facilities were closed. The package was still inside a truck at the Arlington UPS facility, but that nobody was there and it would just have to wait until Monday morning. I explained to him the issues that caused me, with the possibility of having to re-book international flights, etc, and it was obvious that it just. didn’t. matter. At least not to him.

It was obvious to me that nobody at UPS really gave a damn. They honestly could care less about doing their job. Serving their customers. No matter how critical the contents of their shipment may be. It seems to me that some driver didn’t want to drive the 4 miles it would have been to deliver that package to our house. Instead he chose to quit work early that day or something similar, and just put it off until Monday. Here you can see, via the wonders of modern technology, the route that this package flew, from San Francisco, to Ontario, CA, to Seattle, WA, to literally within 5 miles of my house… only to fail:

It travelled over 1385 miles in less than 15 hours… OVERNIGHT, but will take SEVERAL DAYS to make it those last few miles. I could walk that distance many times over in those days. Sad really.

Update:
I called UPS this morning, in the vain hope that somebody with a clue would be able to make something happen, or at least would direct me to some executive I could write to and get a whole pack of people fired. As you can imagine, based on my prior experience… I got nowhere.

Update:
The envelope arrived Monday morning, and I missed work to spend the day filling out forms and sending faxes to various places around the globe… something I had planned to have done a day and half ago… hopefully the red tape will untangle before he leaves tomorrow! Click the link above to read more info.

6 thoughts on ““What can brown do for you?” Apparently little.”