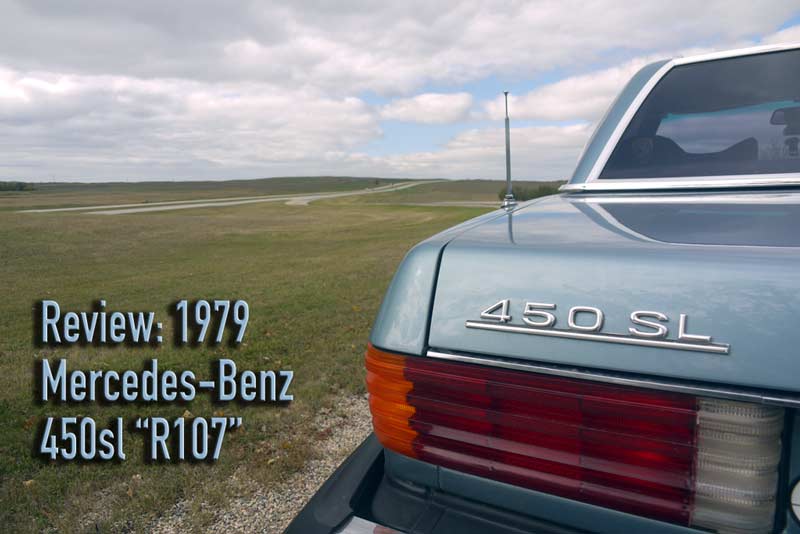 Imagine it is thirty years in the future, 2039, and you are driving in a hard top convertible made in 2009. It has had three owners, and sports a healthy six-figures on the odometer. Would you expect it to leak, rattle, and/or squeak?
Probably.
Would you expect it to look dated and out of place as we approach 2030 when cars (finally) fly and run by garbage-powered fusion generators?
Likely.
In 2029 there will still be 1970s-era Mercedes-Benz cars on the road though, perhaps even as daily drivers. By then they might rattle, leak, and/or squeak. They may even look a little dated. But not today. I drove this 1979 450sl to a dentist appointment this morning in brilliant sunshine. Two weeks before I drove it from coast to coast, through rain, snow, and sun. It doesn’t rattle. It doesn’t leak. It doesn’t squeak. It is as solid today as the day it rolled out of Stuttgart thirty years ago. This thing is built like a tank. 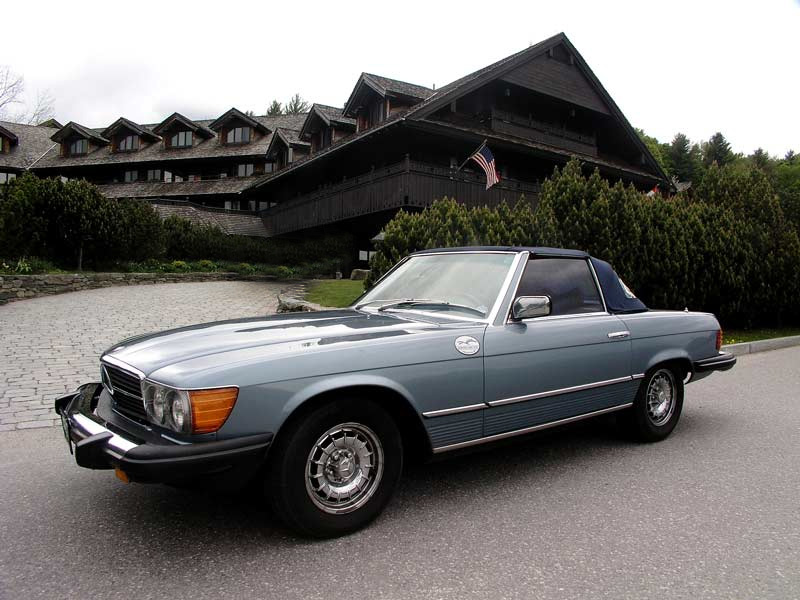 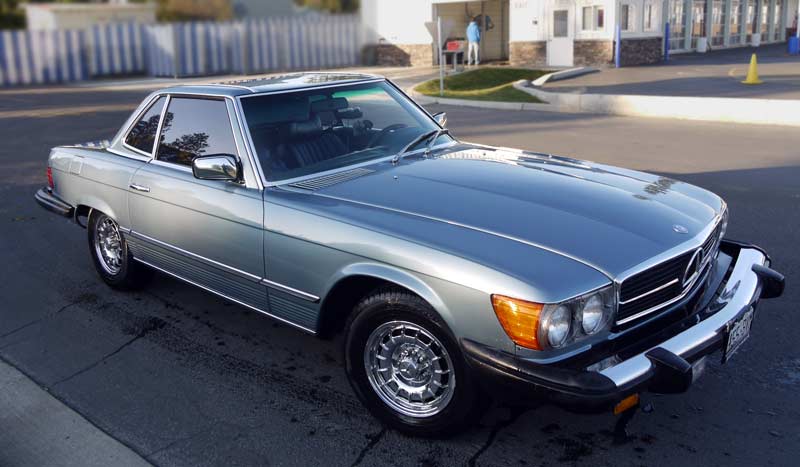 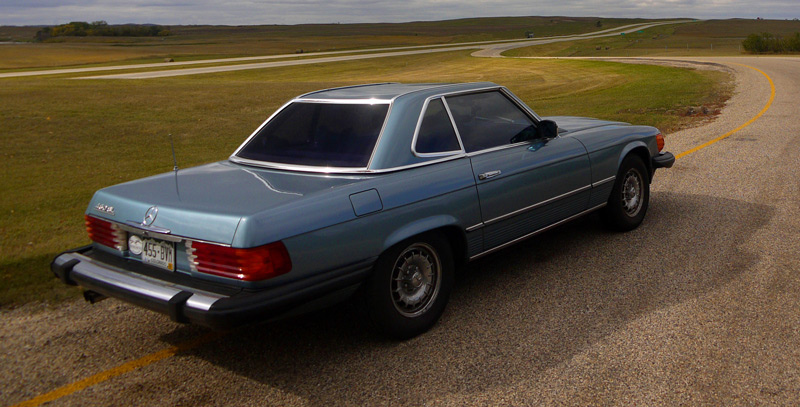 In fact, the engineers who designed it nicknamed it “der Panzerwagen” as one of their specifications was to meet or exceed stringent safety regulations that threatened to force the roadster body style into permanent extinction. Apparently, the Germans know a thing or two about building tanks. Stylistically the R107 Chassis with its blend of slab shapes and extra-long radii curves owes far more to the Panzerkampfwagen “KÃ¶nigstiger” than its graceful automotive predecessors, the W198 and W113 “Sport Leicht” series. Under the hood, unlike the six-cylinder Gullwing and Pagoda Benzes, the R107 is motivated by a V-8 engine. It sports an overhead cam and fuel injection like its father and grandfather, and maintains a paternal link with a Pagoda-shaped removable hard top. From the neck down though it is its own panzer-like design. It was a phenomenally popular car, with well over a quarter-million of them made in a very long run, from 1971 through 1989. Built in a time when Mercedes-Benz was synonymous with “quality”… as they remained alone at the top of the luxury automotive heap, towering Ã¼ber alles the (literally) smoking wreckage of Detroit and Coventry’s faded high-end brands, Cadillac, Lincoln, and Jaguar. This was when the Bavarians in Munich were just started going upmarket, and the Japanese were eviscerating Detroit only from below. 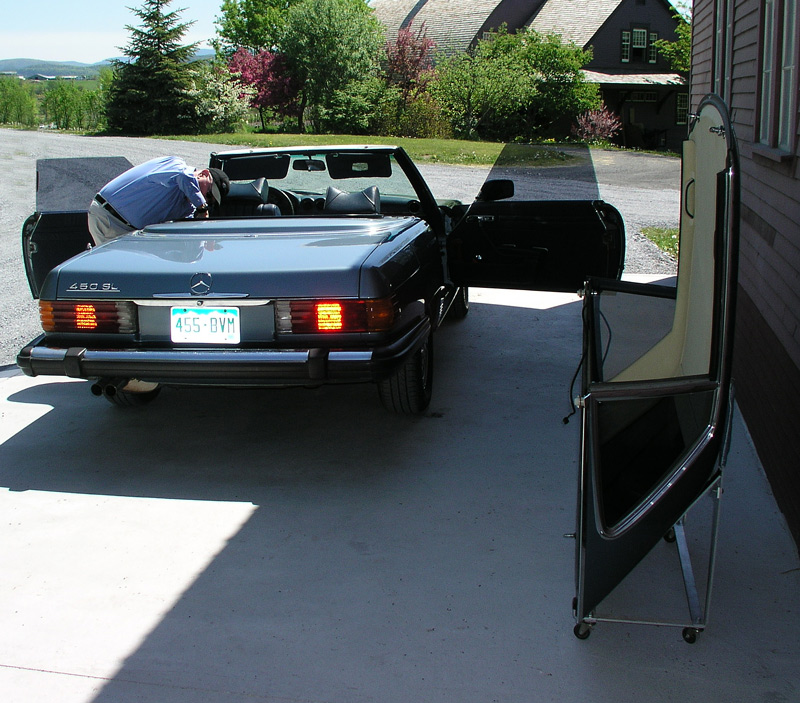 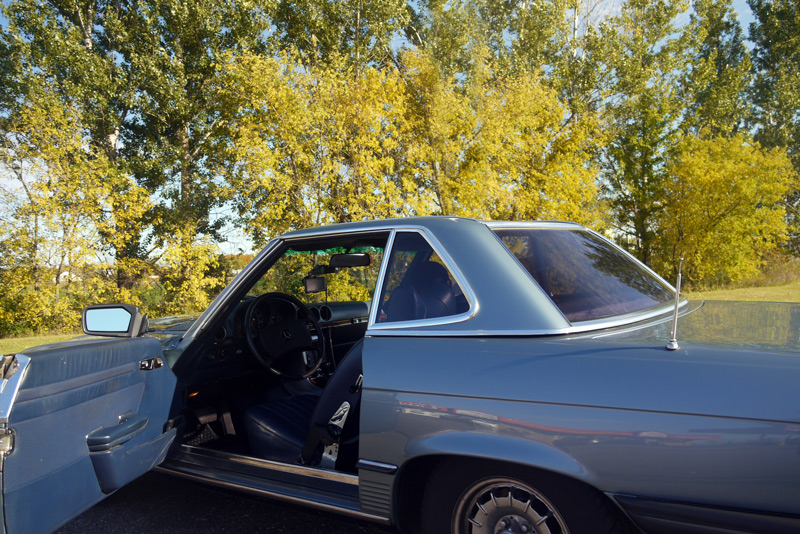 This 450sl sold for around $32,000 in 1979, which adjusted for inflation is a Kia Rio shy of $110,000 in 2009. What did that kind of Carter-era cash get for you? A damn fine ride. The 450sl is a cruise missile of a car, a true Grand Tourer capable of days of comfortable Autobahn travelâ€¦ top up, or down, on or off. The interior is snug, though comfortable for both driver and passenger. Seats are made from MB-tex, the Stuttgart equivalent of Kevlar, which deflects wear, stains, bullets, and tears, while somehow not being torturously uncomfortable like virtually all other 70s-era synthetic seats. Leather was optional, but rarely ordered for these roadsters though shaggy sheepskin was a de rigueur disco-era aftermarket addition, thankfully averted in the example here. Real wood accents trim out the dashboard and center console. The removable hard top weighs about 90 pounds and requires two people (or a garage-ceiling mounted pulley-lift) to install or remove. The latching mechanism is ingenious however and guarantees a snug, no rattle or leak fit to the car. When off the car the top rests on an aluminum rack with casters so it can be wheeled into a closet or corner of the garage. The rack itself breaks down easily into component parts which are bagged and easily stored in the generous trunk. The soft top manually folds away into a decked storage compartment aft of the cockpit when down with (attention car designers!) no trunk space used, and when raised latches to the windscreen using the same hardware as the hard top. At speed inside the car with either top on you are treated to a ride as quiet as a coupe or sedan. Unlike most convertibles, all-around visibility is excellent in any top configuration.

While it may appear to be a big car, especially with the ludicrously large US-market bumpers, the R107 is in reality a diminutive two-seater which when parked next to today’s average machine finally reflects the true scale. It sits low, so when in the company of Suburban Ussault Vehicles defensive driving is an excellent strategy, so all that visibility for the driver pays off. Beyond a few 70s details in the styling it has a timelessness to it that wears far better than many of its peers from the days of disco. Especially with the top down, it appears as if it could be from any time in the last 40 years. Such is the staying power of simple shapes and spare, minimalist design. 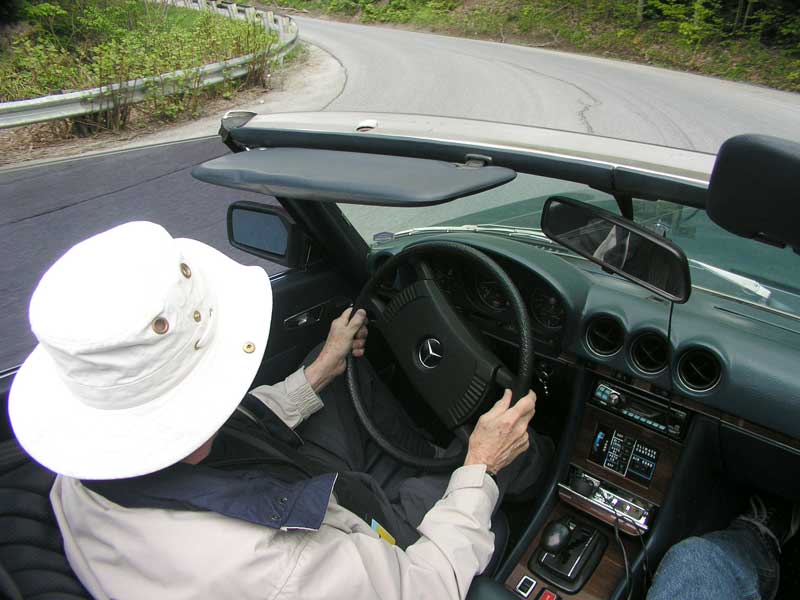 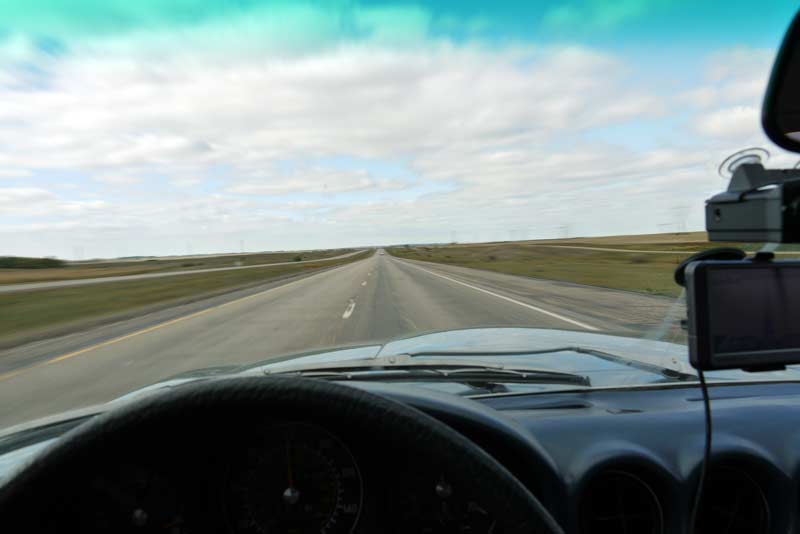 Turn the key and the 4.5 liter V-8 makes a mild muscle-car rumble. The US-spec 3-speed automatic transmission does not inspire any sort of lust, nor risk any chiropractic involvement, performing its job in an undramatic utilitarian fashion. However once underway the chassis displays its Teutonic heritage in surprisingly nimble and huckable road feel. Able to cruise effortlessly at autobahn speeds, while also happily carving up any twisty backroad. Great turn-in and light, nimble steering. It is not the fastest car by any stretch of the imagination, but it certainly can be fun should you choose to toss it about. On the track it will never win any races (unless all your opponents are pedal-powered) but it will provide miles of smiles and never embarrass the driver. If anything it will inspire confidence to push it hard, as its manners are very steady at the edge of its performance envelope; neutral handling easing towards gentle and predictable throttle over-steer as you push it harder in the corners. Just forget about the dragstrip as the sedate transmission will let you down. The R107 is a stately sort of sports/performance car. It comes from Stuttgart but doesn’t wear that on its sleeve like a P-car. 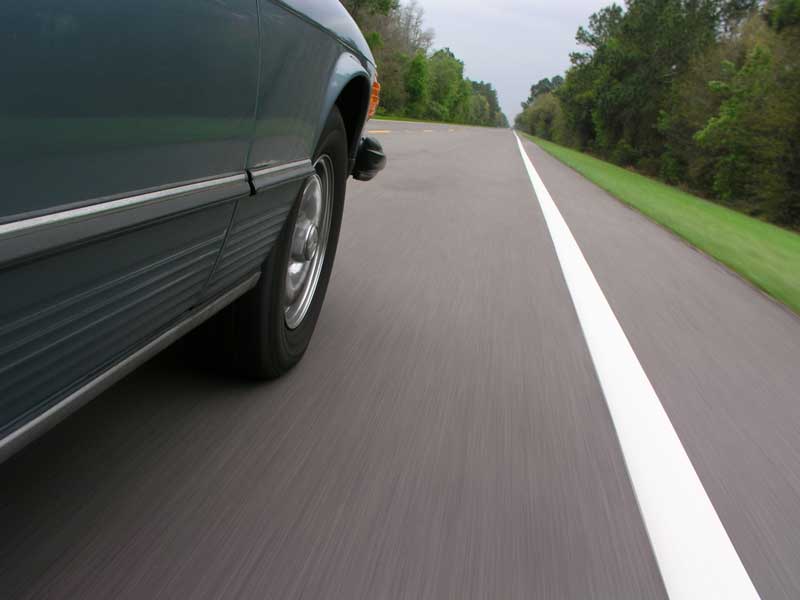 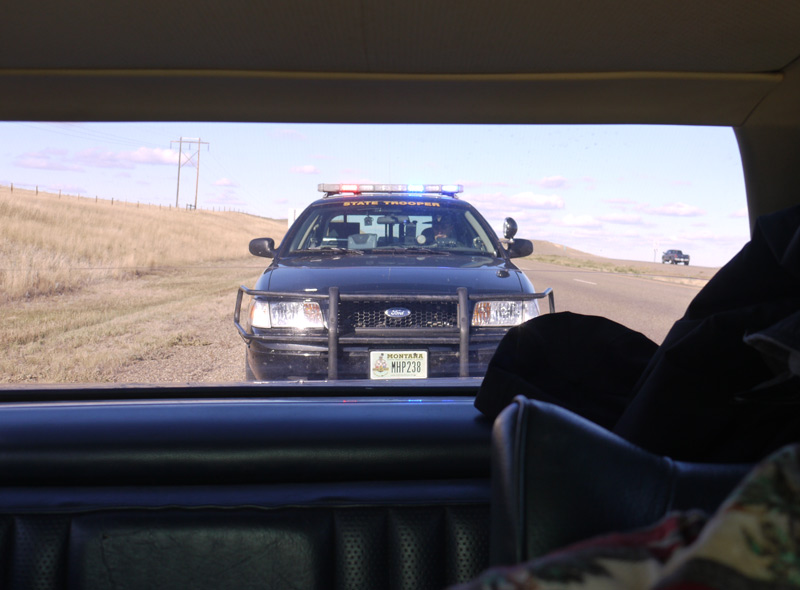 The penalty for this moderately good performance, beyond being fast enough to collect speeding tickets even in Montana, is SUV-like non-frugality. The 450sl will burn up gasoline at about 12-17 MPG … if you are lucky. Thankfully it runs fine on Regular Unleaded, unlike so many finicky machines whose tastes are more top-shelf. This is also not a good winter car in northern climes. Performance on snow and ice is abysmal-to-terrifying. It will swap ends and send you pirouetting off into the woods at the mere sight of a snowflake. Park it once the thermometer starts dropping. Their A/C systems, especially for the ’77-’79 models can be problematic so if you’re living in Houston pick another year. Here in the Pacific Northwest however it’s a wash… it snows about as often a it reaches 90Â°F; almost never. 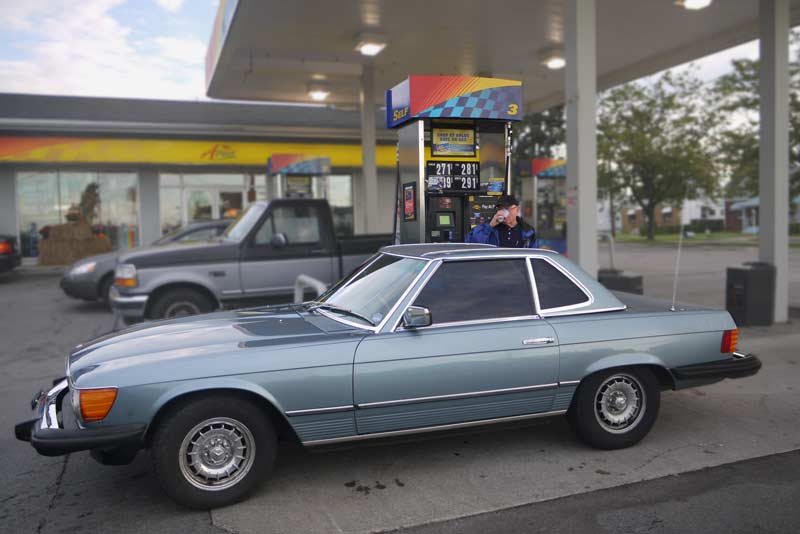 While nowhere near the stratospheric value of its gull-winged supercar forebear, the R107 was still an upper-class car, the ride of choice for Professionals of the 70s & 80s: Doctors, Bankers, Dentists, and Trophy Wives. Given their popularity, 19-year long manufacturing run, plus build-quality that was truly higher than any car before or since, R107s are still available in good numbers. Many of them coming from one-owner garages, at a cost about what you would pay for the lowest tier of today’s scheisseboxen. So here is that most rare beasts: An affordable, reliable classic car, that provides top-down motoring while being relatively inexpensive to buy.