Given the weather, perhaps we should be in THIS Jaguar!

Yes, it has been a couple of weeks since the end of the 2008 CMR, but I’m finally getting around to posting the rest of the story. When we last left our heros, they were about to leave Port Townsend on a TSD leg… I drove so there are no photos. We rallied out to Marrowstone Island, a place I had not been to since my friend Bill Dickson‘s wedding in 2001. (man… it seems like just yesterday!) We, of course, made a wrong turn right near the end of the segment, but finally ended up at the park where the segment finished. A short hike lead us to the featured car collection of this year’s Rally. Doug, the Rally Organizer always manages to find an interesting collection for us to visit and this year’s certainly fit the bill of “interesting”! This gentleman on Marrowstone Island has been acquiring cars for over 50 years and, from what I can figure… building his house around them. The “centerpiece” of the collection is a Bugatti… in his living room. From there an extended house/garage wraps around in a little labyrinth of automobilia. Some are real, some are replicas, all are interesting.

Here are some photos: 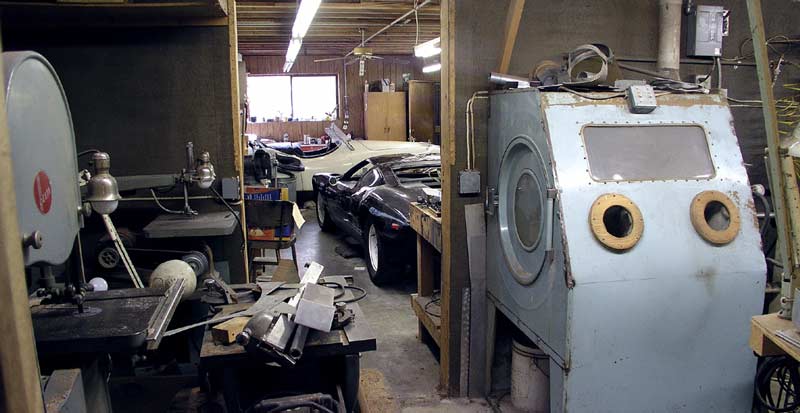 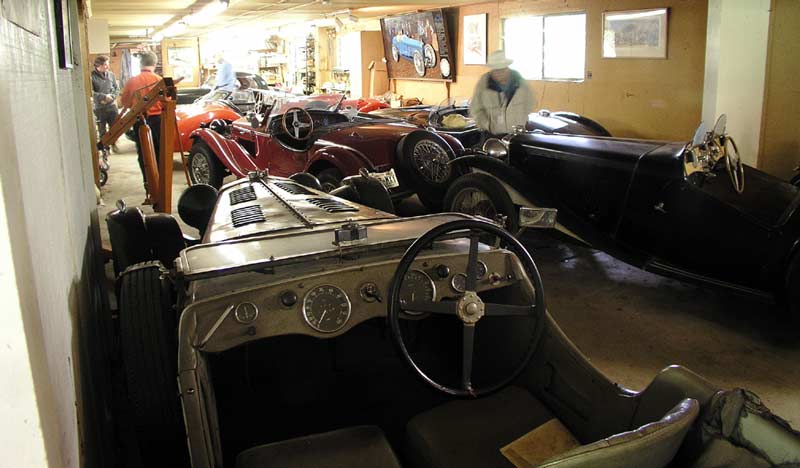 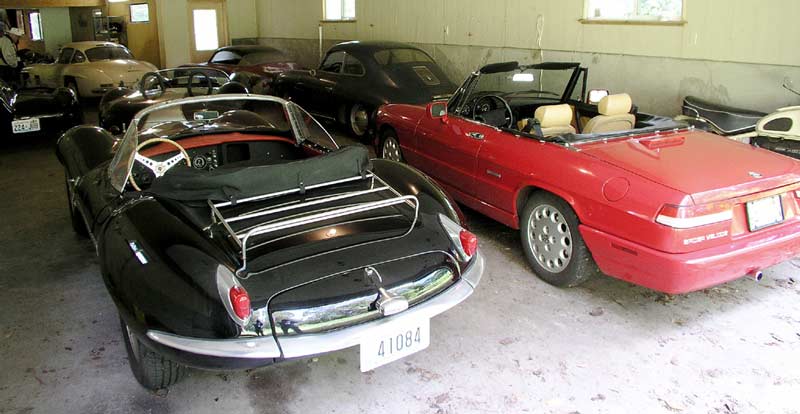 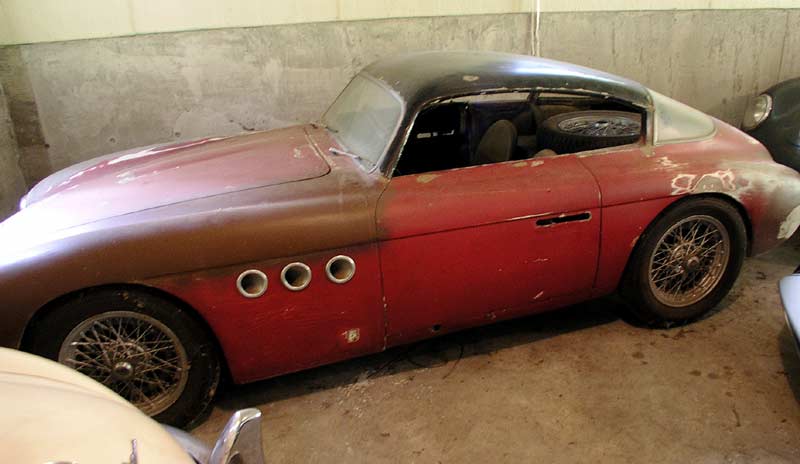 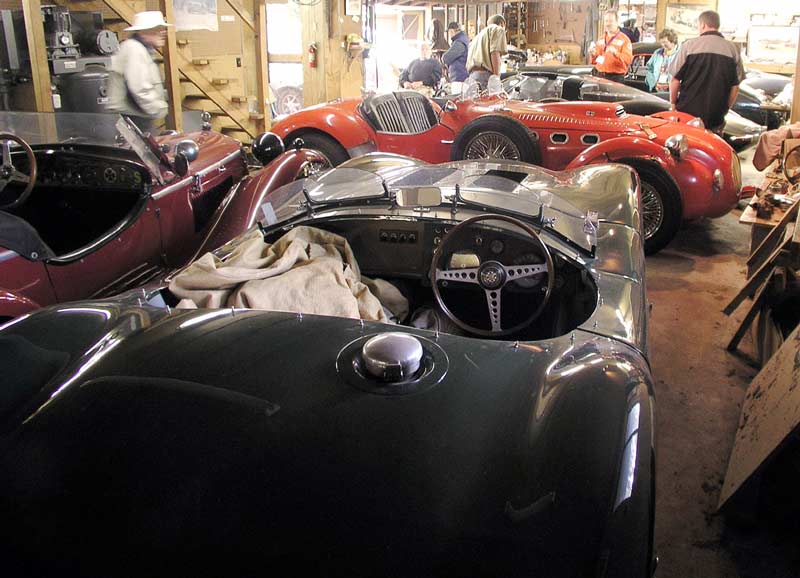 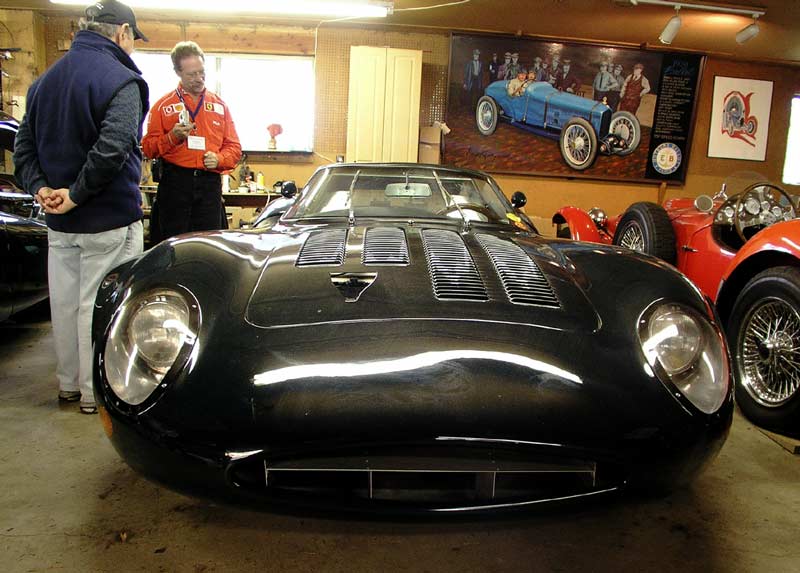 …and of course, the Bugatti in the living room! I can’t identify a few of these cars and would appreciate any spotters among my readers to call out the ones I missed. The speed-holed Ferrari looking job had an ‘Abarth’ scorpion on the nose. No idea what it could be specifically… I bet Shaun, Paul, or Roger know. Clue me in. (Bob Moore on the Jag-Lovers E-type list spotted the Abarth before any of you. It is a 205 Vignale Berlinetta. Wow.)

From here we rallied back to the hotel and likely put our score even farther into the hole. Dad & I were just not on our game this time! Perhaps a night’s rest will help? We had a great dinner and enjoyed David & Adele Cohen of Vancouver BC share their tale of running the Peking to Paris Rally in an old Model A Ford. Astounding tale really. Besides costing phenomenal amounts of money, this is a rally that goes on for over a month. And traverses the entirety of Asia and Europe. Let me put it this way, I’ll never complain about US roads of cops ever again.

We also heard preliminary results: We’re firmly in 7th place out of 11 cars. Not as bad as we felt, but really only as good as last year… and back then we had no clue HOW to do it. We are REALLY off our game. 🙁

We awoke the next morning and rallied around in a light drizzle. We thought we were doing great, having rested well and ate a good breakfast. Above: Crossing the Hood Canal Floating Bridge on a typical day of Pacific Northwet weather! 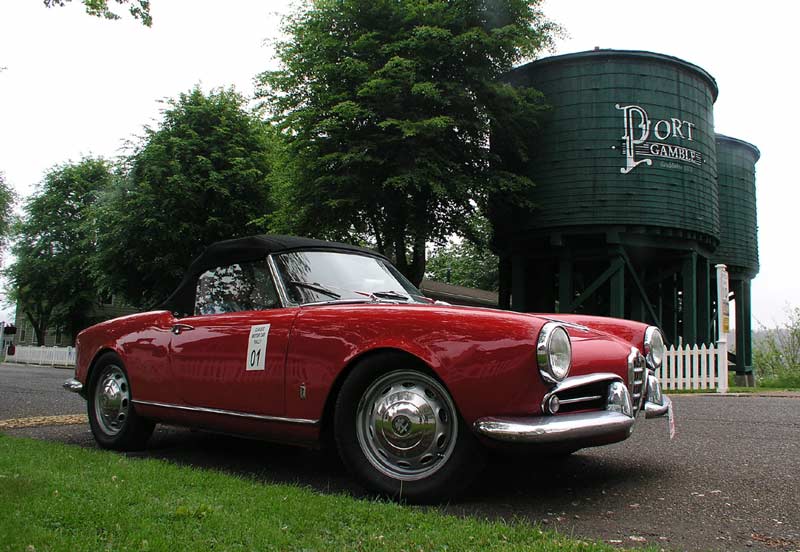 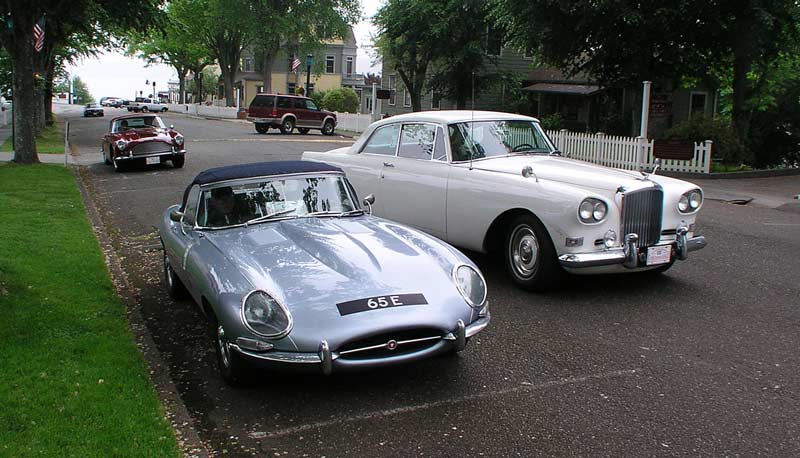 Above: Lining up for the TSD start in Port Gamble.

We rallied over to Port Gamble in a Monte Carlo style segment. We’re pretty sure we nailed it, but under this format these “MC’s” are only worth bonus points and they are very easy to get right. The next TSD left Port Gamble and rallied through a fairly compact area at the north end of the Kitsap Peninsula. The route was doubling back on itself and VERY confusing navigation choices. I was driving and Dad became thoroughly confused about halfway through. We made a HUGE error and ended up back at the start! Our odometer now miles off, and our time completely blown, we consulted the route book for the location of the next segment’s start and found where that was with a map. We basically wrote off the whole segment! Following major roads we found the next start point, a Shell station on an Indian Reservation. Oddly enough, we arrived in correct car-order (we were car 5) which made it seem, to our competitors at least, that we were not as completely incompetent as we felt!

I went into the Shell station cum-cafe-cum-casino-cum-liquorstore and bought some Rain-X for the windscreen while Dad sat in the car and did Zen meditation, or Vulcan Mind Melds with his calculator, or something to try and get ourselves sorted out for the rest of the rally. Perhaps I should have just loaded up the Jag with cheap tax-free booze from the Reservation liquor store?

I got the magic juice on the window so I could see better and we set off on the next segment feeling bad, but at least willing to give it a go. We didn’t get completely lost we just made a wrong turn and ended up on the Hood Canal bridge… a four-mile mistake! Thankfully it was pretty much clear of traffic and managed to catch up and get to lunch feeling pretty good about our performance. Lunch was in a park with a boat launch on Hood Canal and a view of the floating bridge. This is where I saw the crab boat named “Jaguar” pictured above. 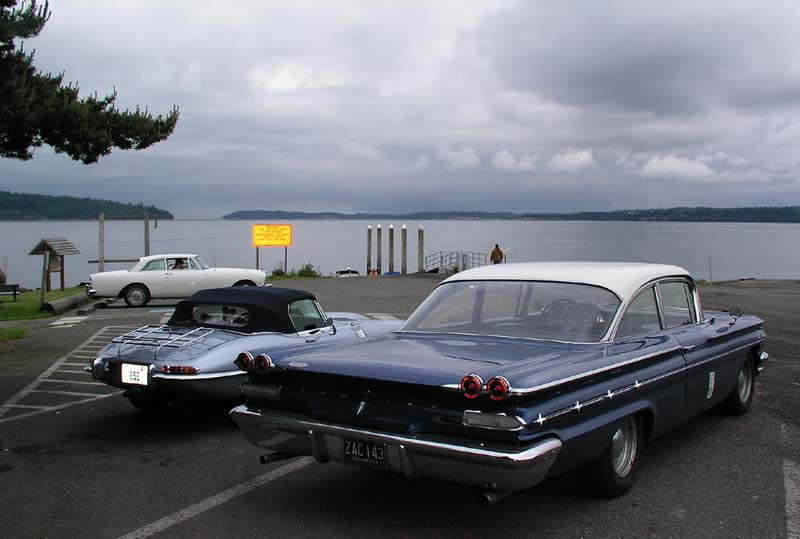 Dad scarfed down lunch and like so many other Navigators, climbed into the car to try and create a full set of calculations for the afternoon’s segments. I wandered around and took photographs, enjoying the views of the water, but missing seeing the mountains that ring the area. The clouds were low, thick, and grey.

Our time came and we drove off. FINALLY, we were doing it right. We made every turn correctly and were able to anticipate the traps and avoid them all. The last segment had us spinning around in slow circles through a residential area near Port Ludlow. Traps abounded but we never fell into any of them. How come we didn’t work like this earlier?? Oh well, such is TSD Rallying!

We finished up early and took a nap in the room… both of us completely worn out. Dinner was very nice, with Steve Norman sharing his “auto”biography, an annual tradition at this rally where a participant talks about the cars they have owned. Annie & Steve also showed photos from their recent winter rally in the Canadian arctic.

Prior to breakfast a Photographer from the local paper came and shot some photos of the cars. We assembled them on the side of the hotel: 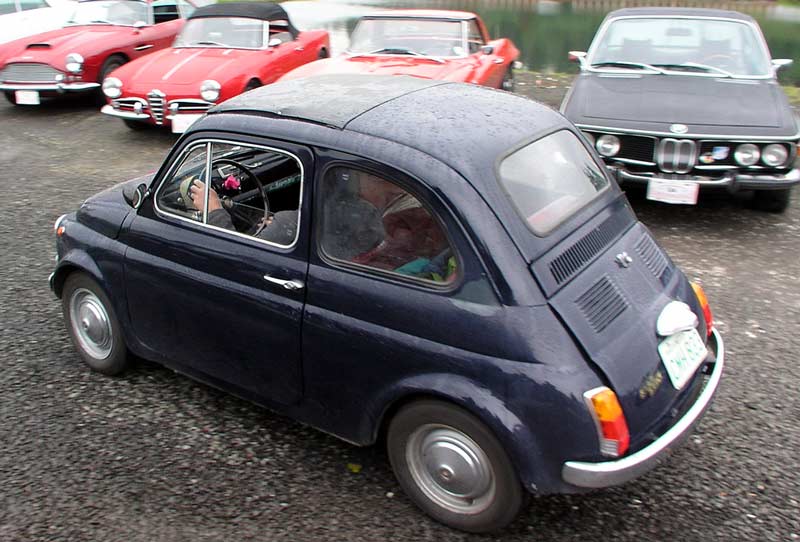 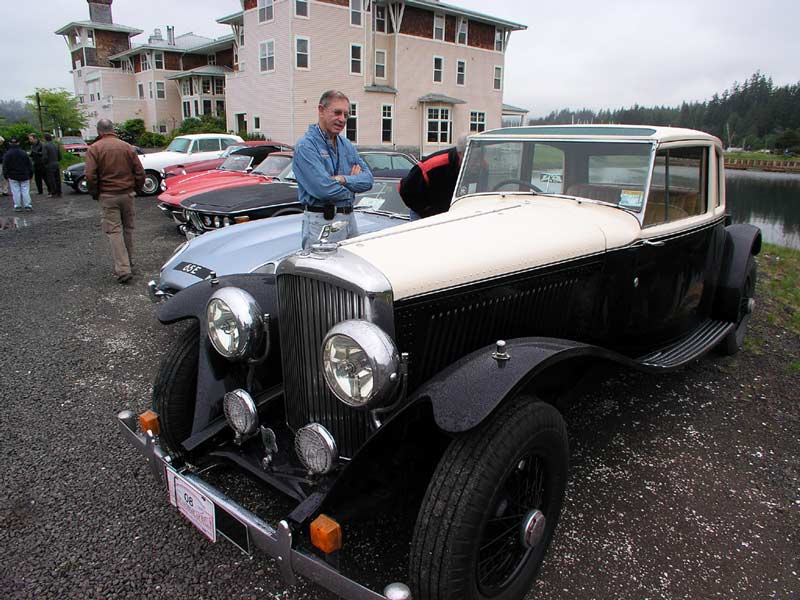 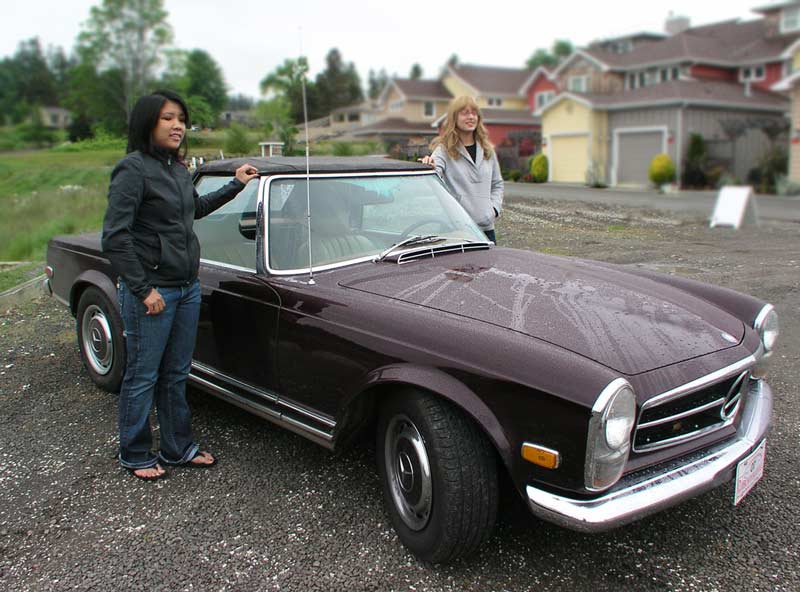 After the photog was done everyone crowded around the pre-war Bentley and gave the right seat a try. 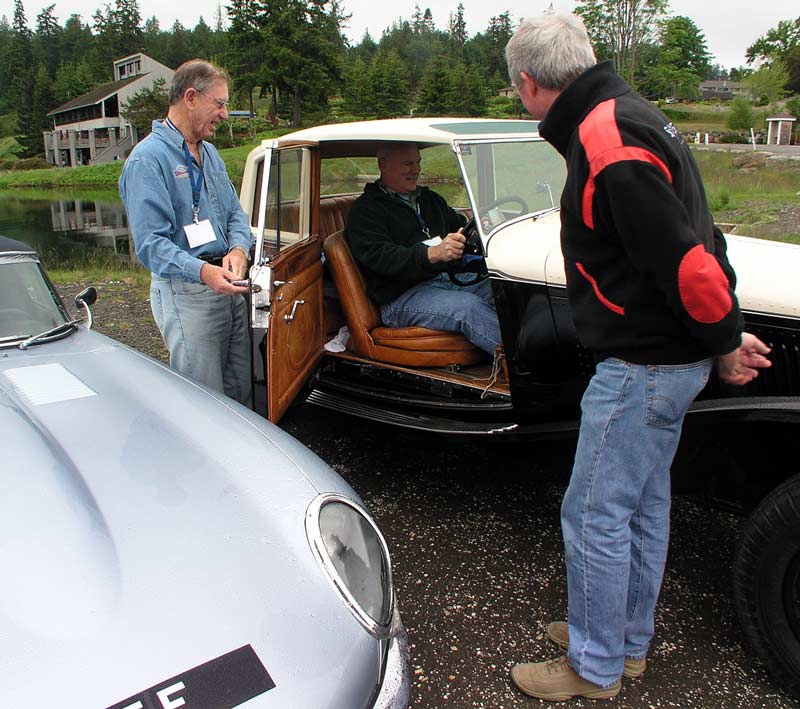 The gearshift is on the right side, unlike every other RHD car I’ve seen. Very odd. It is a 4.5 liter built in 1939. The car spent most of its life in the Southern Hemisphere, either Argentina (where it was raced actively during and after the war) and New Zealand.

We all gathered for the awards brunch on Sunday morning. To our eternal shock, we didn’t come in dead last. In fact we didn’t do that bad overall… 6th place, one better than last year’s performance. First place went to Duane Crandall & Bill Vilardi in that very nice Aston-Martin DB4. As tough and technical as this rally was, nobody came out without at least SOME penalty time, so we didn’t feel too bad but we do recognize that we need to get our act together for next year. We’ll have another go at this style of event in August for the Monte Shelton down in Oregon. We will do better there.

My dad had a plane to catch so we headed down to Winslow on Bainbridge Island. I could tell from the oncoming traffic as we crossed the island that a ferry had just landed… unfortunately traffic was such that as I pulled into the tollbooth JUST as the horn sounded and we missed it by just a few minutes. Oh well. We sat for another 40-some minutes for the next boat over to Seattle. At least we were loaded near the front. 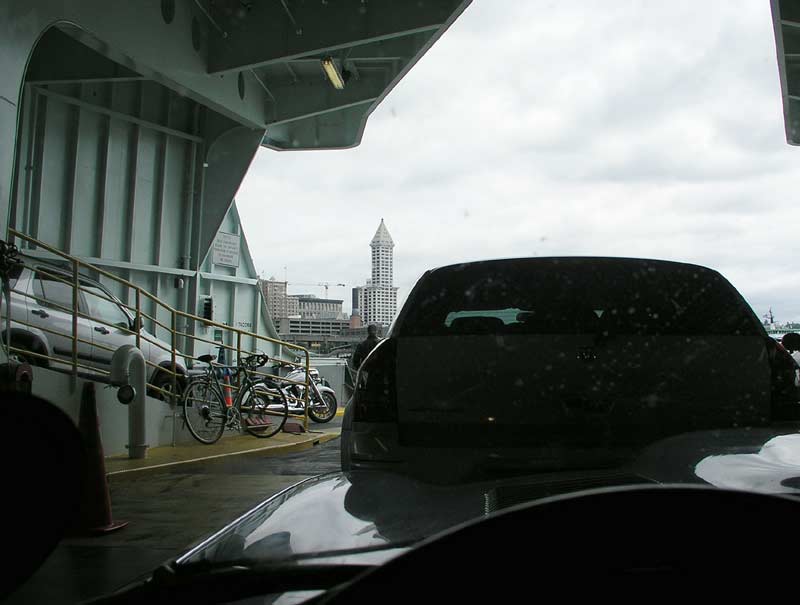 Above: The iconic view of the Smith Tower in downtown Seattle as you arrive by ferry.

I drove dad up to my sister’s house to drop him off for a later ride to Sea-Tac, and met up with my brother-in-law and my nephew Ian. Ian got to drive the Jaguar: