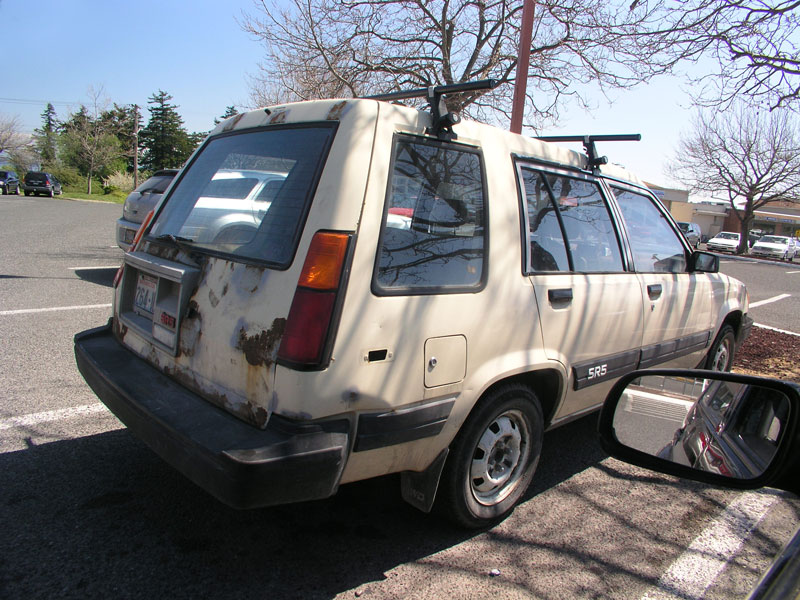 In early April Eugene, Oregon resident Paul Niedermeyer of thetruthaboutcars.com wrote a review of the Nissan Stanza Wagon under his ‘Curbside Classics‘ category. I commented that surely there will be a followup covering the ubiquitous mid-80s Toyota Tercel SR5, with their invariably rusty rear hatches. These cars sprang up like mushrooms here in the Pacific Northwest, and remain ubiquitous on our roads a quarter century later. Nearly every damn one of them in beige, and every damn one of them now sporting rust spots on their rears. I don’t know why, as the WaSDOT rarely if ever salts the roads, and certainly not in Port Townsend. I posit that there was just something faulty about the construction or finish of these hatches as they came from Toyota. Note how the rest of the car is fine, yet the rear hatch looks like it is in the advanced staged of Kaposi’s Sarcoma. Note the HOLE just to the right of the hatch handle. Next time you see one of these old Toyotas on the road check that spot and I bet you a sushi lunch there is a hole, a rust spot, or a primer spot right there. I see these cars fairly frequently as I drive around Washington state and I swear every damn one of them has a rusty rear hatch, and of those 60% have a rusty hole right at that exact location. Let me know if I’m right.

Niedermeyer affirmed the future appearance of the Tercel, but claimed that in Oregon, they are not equipped with rusty rears. Bullshit. I very much doubt this and offer the above photo as Exhibit A in my case. This Tercel with Oxidized Ass was spotted in a grocery store parking lot in Port Townsend, Washington yesterday afternoon. While the rot on this hatch is a rather advanced case I will verify that almost every Tercel SR5 I see looks like this. I’ll snap and post a photo of each one I see until Mr. Niedermeyer admits the error of his ways.

10 thoughts on “The Truth About The Perpetually Rusty Toyota SR5 Rear Hatch.”