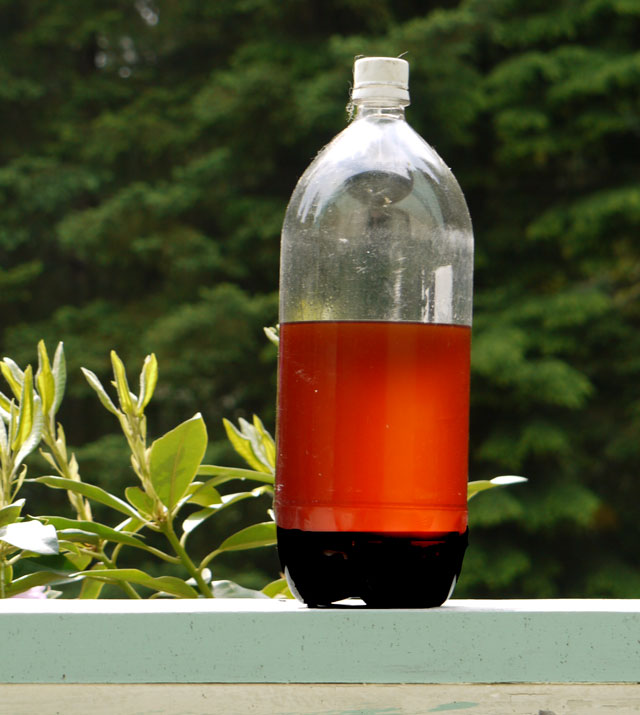 I few weeks ago one of the guys in my small BioDiesel co-op dropped off a barrel of waste oil he collected from a restaurant. I was a bit taken aback when I looked at the oil as it had… some odd coloration. Usually a barrel of oil settles in a way so that the top few inches look like new. That is clear, bright golden-yellow oil. When I looked at this stuff it was sort of shocking orange, and very opaque… almost milky. I though perhaps it had been shaken up in transit and have left it sitting out by the barn for a few weeks to settle. My worst fear was that it wasn’t really oil at all. Next in line was that it had been contaminated with something. Water if of course the usual waste oil contaminant, but this looked… weird. So last weekend I took a 1-liter sample and made a small test-batch. The oil had settled and was mostly clear, but still VERY orange. The test batch is done at ambient temps so it takes a long time. I let it sit for five days and above is how it looks today. Still not “clear” (it is unwashed though) and still… very orange.

Next I’ll subject some to the 3/27 Conversion Test and see how it does. My gut feeling says it is “good” and that the coloration is just some artifact of whatever it is they are cooking. The oil comes from a Mexican food place, so perhaps it is excess paprika, or maybe Chorizo, which are the only Mexican cuisine items I can recall that are unusually orange in color.

If it tests out well I’ll mix it with the rest of my (normally colored) waste oil and make some BioDiesel from it. Maybe my exhaust will make people think of nachos instead of french fries now? We’ll see.

Speaking of Home Brew BioDiesel I figured I’d share one of the risks of this activity: Shoe dissolving. 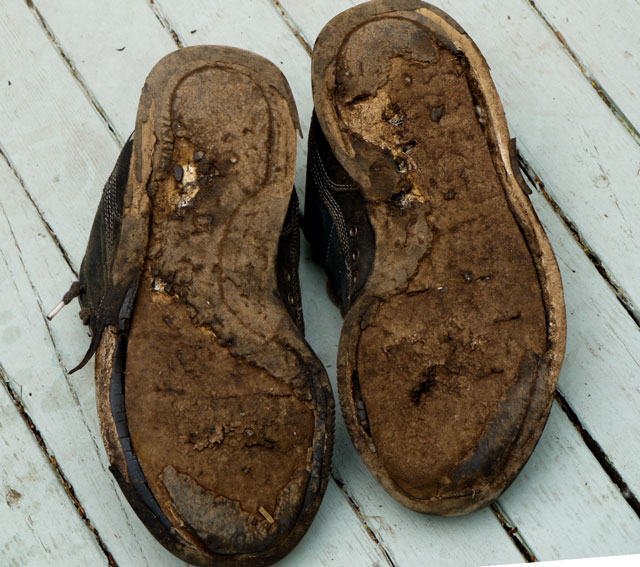 BioDiesel is one of the world’s great solvents. It attacks rubber with the ferocity of a shoal of slow-motion piranhas. Exposure directly to vegetable oils literally makes rubber vanish. I only wear one pair of shoes when I work out in the barn around the waste oil and BioDiesel, and the above is a photograph of their current state. This is of course after many years of use, but I think it is time to retire them.