Note: The following is a re-write of my father-son road trip story for the JagMag. 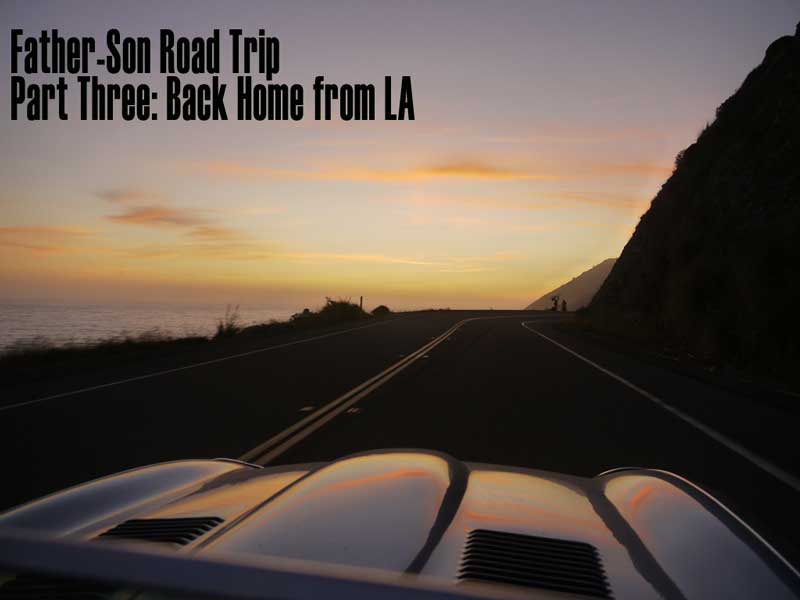 Now joined by my younger son Nicholas, age 15, we began the return journey to Seattle from Los Angeles. For the first two days of our journey we would be accompanied by my friend and host Larry Wade from La Canada, California, along with a Wade family friend from Norway, named Ã˜yvind Aamodt. Larry drives a 1962 E-type OTS and we met via the E-type group on jag-lovers.org. With Larry leading the way we would not have to do much in the way of navigation for the first couple of days, as it was just a case of “follow that Jaguar!” Having already been down the coast, we chose to head for the California Sierras for some sightseeing and mountain driving. 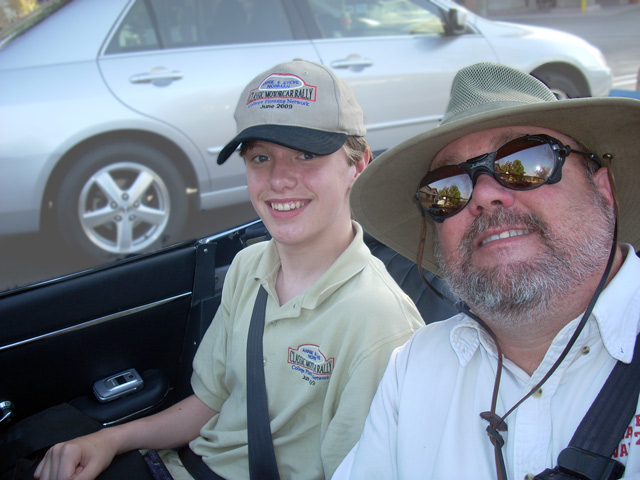 Larry leads the way out of the La Canada/Flintridge area straight through the Angeles Crest mountains that loom over Los Angeles’ northern horizon. (The same mountains suffered significant damage from the large Station Fire later this year, so we were lucky to see this area before it was burned.) The flora of the Angeles Crest is really interesting, with all sorts of alien-looking desert plants that Nick and I have never seen before. We drop down into the very western edge of the Mojave Desert, then jump over the Grapevine on I-5. Entering the Central Valley is like driving into a broiler. It is 109Â°F and climbing. We raise the tops of our E-types in an attempt to get out of the sun, but the heat is inescapable. I’ve never driven this car in such blistering heat, though thankfully it runs cool thanks to a well-functioning radiator. We stop for gas on California Highway 99 and Larry suggests we stop for lunch a bit up the road, where we can buy “huge cisterns of lemonade”… 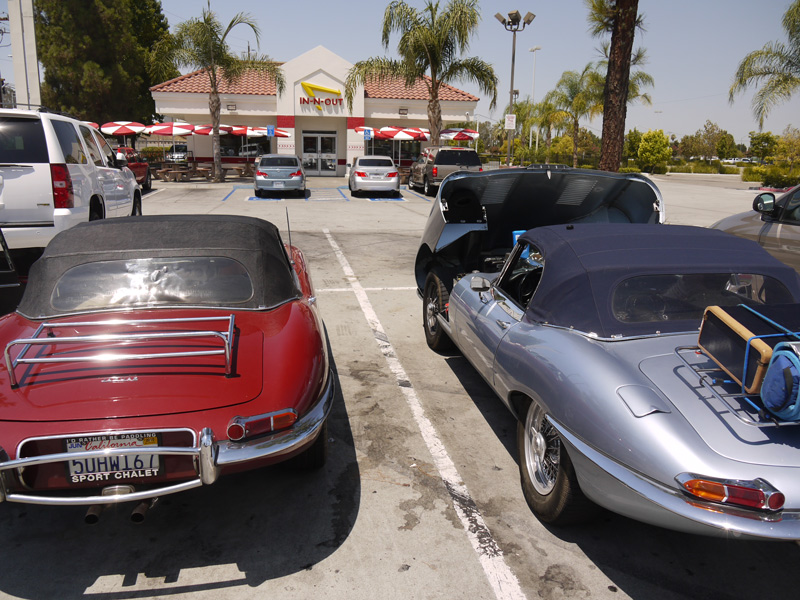 The lunch stop is at In-N-Out, the legendary California fast-food outlet. This violates one of my road trip rules (No Fast Food) but this exception is easy to make as the conditions demand a stop, and the air-conditioned comfort and cold lemonade really restores our spirits from the oppressive heat. Unfortunately the lemonade could not help my car. My starter motor, always problematic in hot weather, now refuses to turn. We push-start out of the parking lot, and resume our journey. (It turns out that the last start that starter motor had in it was that morning, and we push-start the car all the way home from here!) 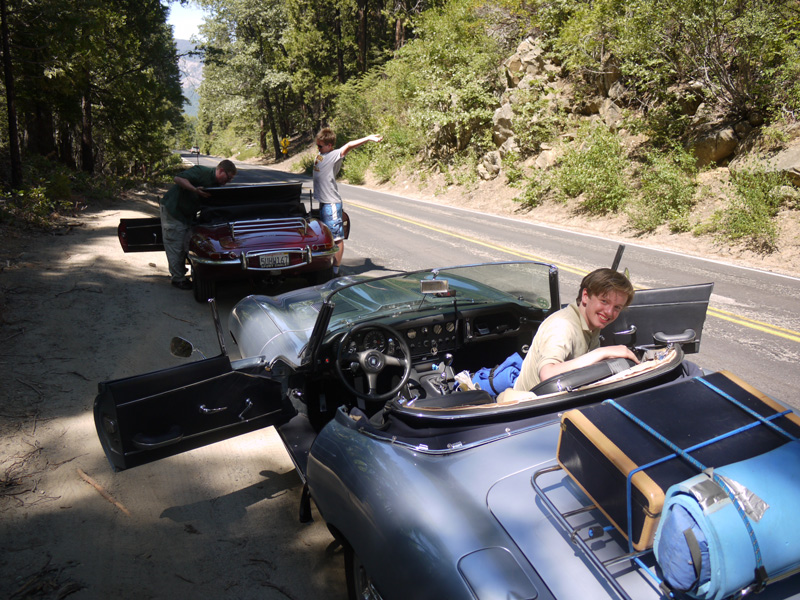 The temperature drops rapidly as we climb the Sierra foothills, and the trees provid welcome shade. Nick and I feel much better to be out of the broiler of the Central Valley. We arrive in Yosemite National Park in mid-afternoon, stopping at several scenic vistas as we approach the famous Yosemite Valley. 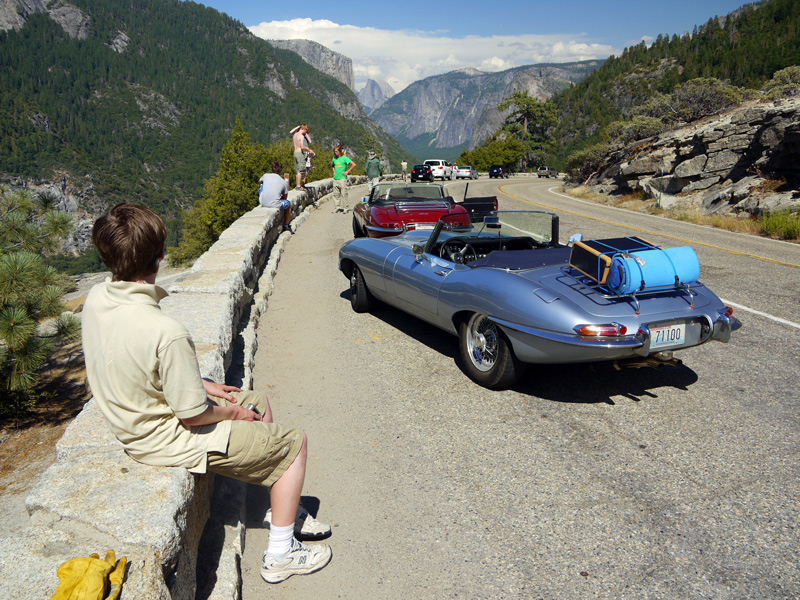 I had not visited Yosemite since the mid-80s, but this is Nick’s first visit. As we enter the valley all of the batteries of our digital cameras run dry, so instead of shooting photos I provide my son with a guided tour of the valley’s sights and major rock formations. He loves every minute of it. Exiting the valley we drive towards Tioga Pass to the White Wolf campground where the two E-types once again draw stares from other campers as the most unlikely RVs ever seen. We enjoy a great night out under the stars. 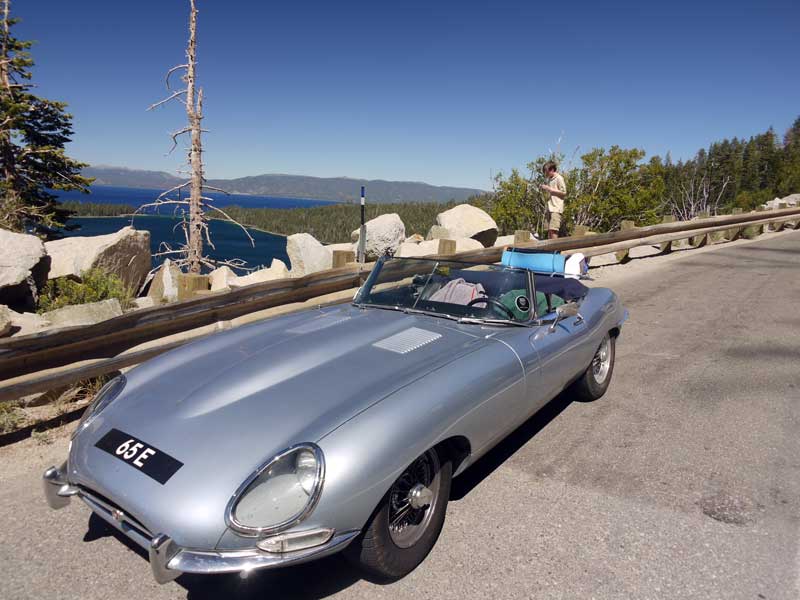 The following day we drive through Tuolumne Meadows, up and over Tioga Pass, down to Mono Lake, then lunch at Bridgeport. This is where Larry & Ã˜yvind turn back to LA, and Nick & I continue north. We say our farewells, then make a stop at Lake Tahoe to admire the deep blue of Emerald Bay, then double-back onto US Hwy 50 and towards the Bay Area. As we come down through California gold rush country I call David Shield, another E-type owner I know through jag-lovers.org and arrang to meet him and another another E-type owner, Tom Pope for a cool drink. Our plan is to allow the sun to set before we again entered the Central Valley! 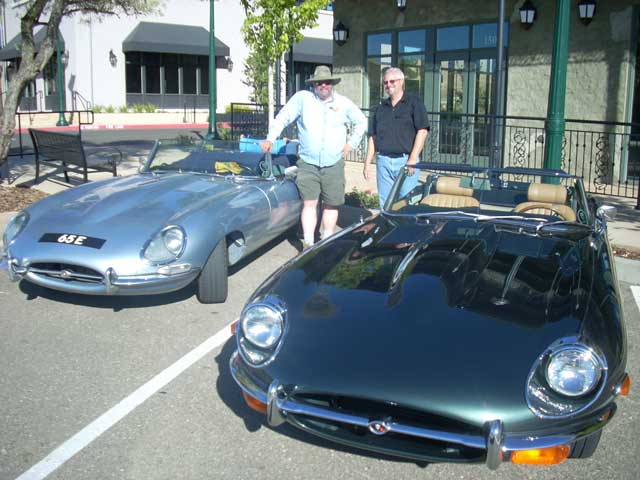 Cool drinks and socializing complete, we venture west just as the sun began setting and our drive through the Central Valley is far more pleasant than yesterday’s oven. We stay the night at a friend’s house in Lafayette, a pleasant little town in the hills east of Berkeley. Of my two sons Nick has always shown the most interest in cars. He enjoys helping me work on them, and likes to visit car shows, events, and museums with me. Our objective in the Bay Area is to visit the Blackhawk Collection in Danville. First thing in the morning we find our way to this stunning museum located oddly enough in a shopping center (thankfully at the top of a hill, like my friend’s house in Lafayette for easy roll-starting the E-type!) The Blackhawk Collection is a must-see for any car guy, as it is an excellent display of all forms of automobile from the early days through the present, with an emphasis on pre-war full classics, and post-war sports and muscle cars. Among the cars on display is our car’s doppelganger: 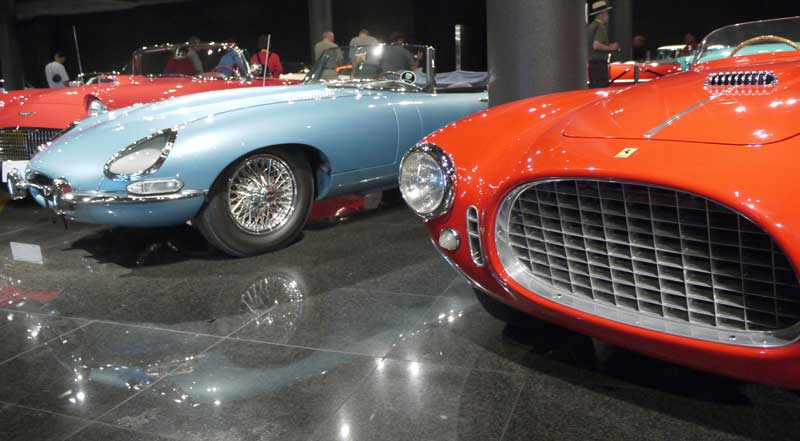 The museum is so amazing that Nick & I spend two hours more than we planned for ogling cars. Once again on the road we discuss the cars and I ask Nick which car he would pick to have. He immediately answers “the E-type.” Hoping to provide a lesson in Economics I suggest that the Mercedes-Benz 540k Special Roadster might be a better pick. Why? He already has a silver-blue E-type convertible and the 540k is worth about $6million. He can buy about 100 E-types with that amount of money! It is fun to watch his teenage brain process that information. After all the hot driving we plan on heading for the cooler coast for the rest of the way home. Our route goes over the Bay Bridge, through San Francisco, and then over the Golden Gate. I provide commentary on our surroundings while Nick soaks it all up. He commemorates his passage over the foggy Golden Gate bridge with a self-portrait: 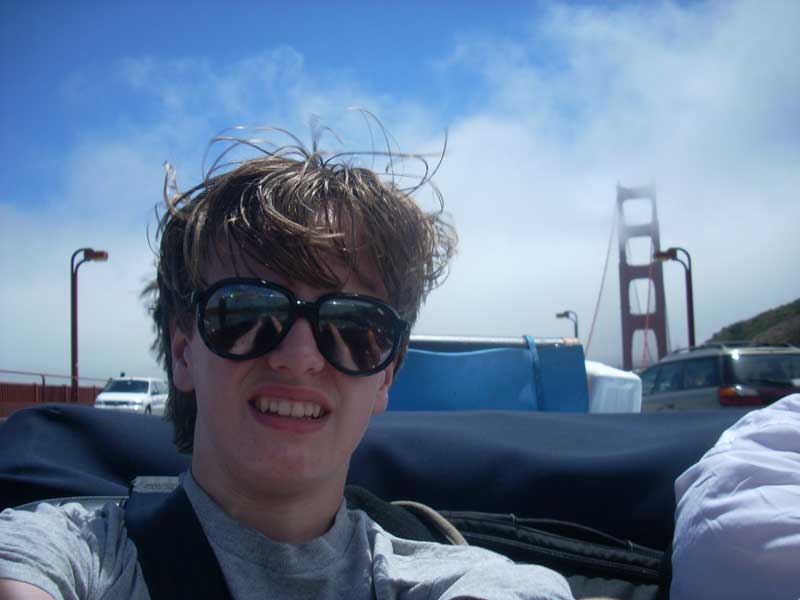 We head up the coast for what becomes a magical afternoon and evening. At first Highway 1 is choked with traffic, but a construction stoplight stops us for 20 minutes and once underway again we never see another car ahead of us! The road is a joy, the weather is mostly excellent (despite a short section of thick, cold fog around Mendocino that had us bundle up), and as the sun heads for the horizon we stop and hit the beach to enjoy the sunset. 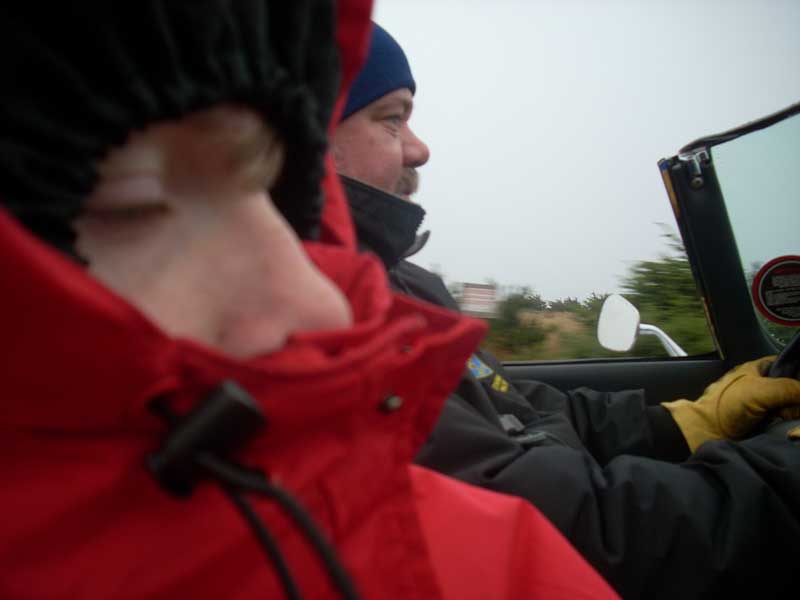 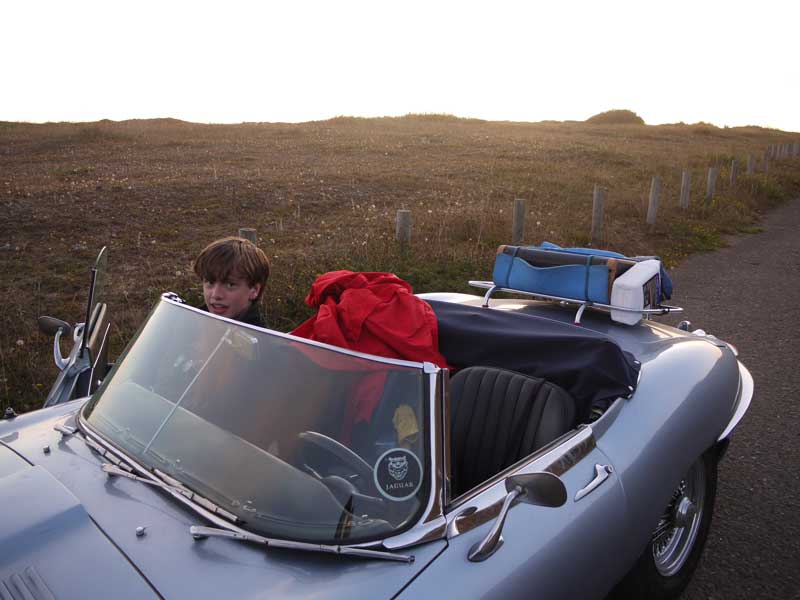 Nick runs around on the beach and climbs rocks while I shoot sunset photos. As the sun slips below the waves Nick stands by my side with his arm around my shoulder; we’re both very happy. We’re utterly alone on this northern California beach, and it is a wonderful moment I will treasure for the rest of my life. We climb back in the Jaguar and (after roll-starting it) continue north in the lingering mid-summer twilight. Darkness falls as we leave the coast and climb towards the Redwoods. We find a hotel and turn in for the night, very tired-but happily so, from a long day’s adventure. The next morning we see the big trees, enjoy a breakfast in Eureka, and head north for Oregon. Traffic is once again thick on US 101, and we take advantage of every scenic loop alternate to escape the parade of RVs, motorcycles, and construction delays. Weather alternates between fog and sun and we stop at several beaches when the conditions are right. We catch glimpses of marine mammals on a few occasions, and even once spot a yellow Ferrari 275 GTB/4 going the other direction on 101! At one stop where I had my telephoto lens on my camera in the vain hope of photographing a pod of porpoises we spotted, I snap a shot of Nicholas that has become my favorite recent photo of him: 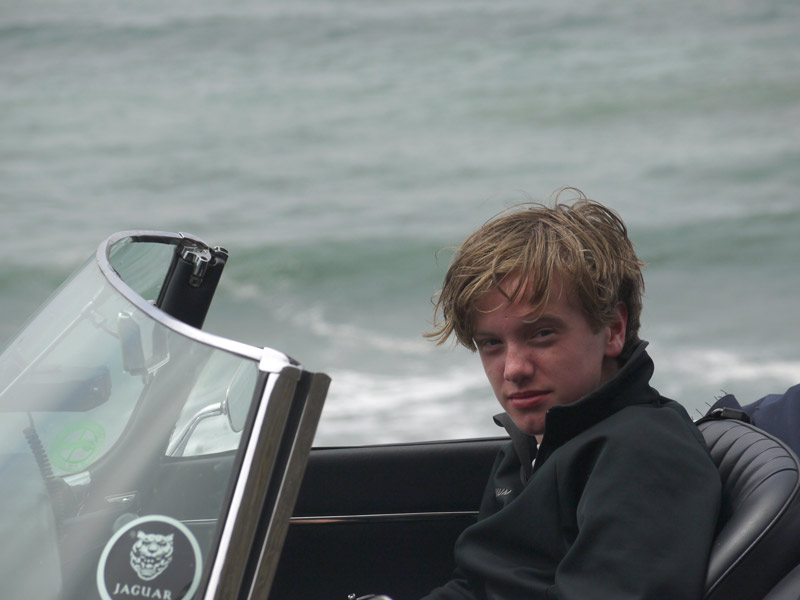 We make it about half-way up the Oregon Coast and stop at a small motel in Yachats that advertised a heated indoor swimming pool. After a day of running around on beaches we really need a swim! The clerk offers us a cool room in the form of a lighthouse which turns out to be funky and fun. Nick sleeps on a very high bunk which he thinks is cool. 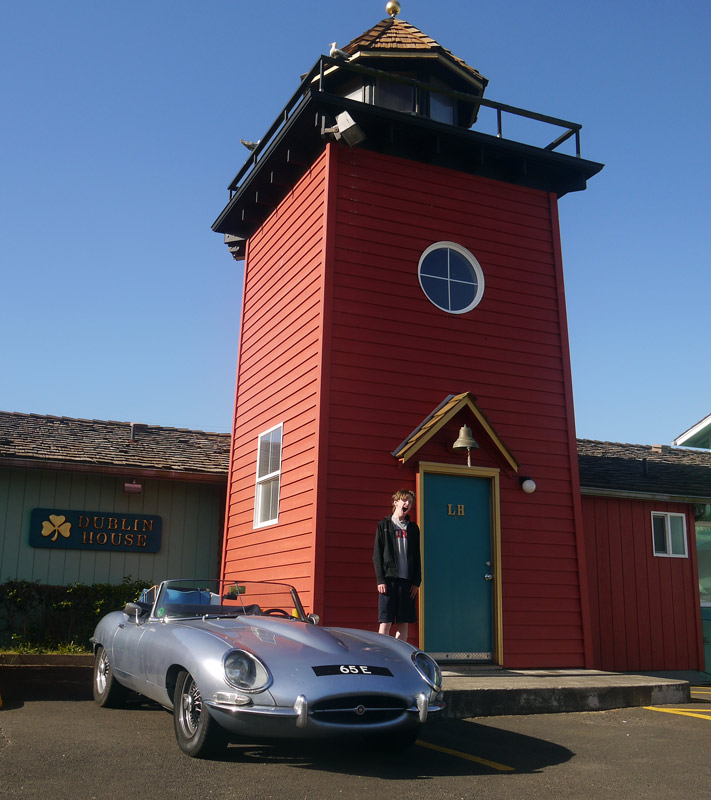 The morning finds the E-type the star of the motel’s parking lot, with a dozen travelers admiring its beauty. I deputize them all into a push-starting crew, and they enthusiastically agree. The parking lot was flat, and Nick is happy to have the help! Traffic on 101 is again not conducive to spirited driving but side-trips prevent me from going insane. A highly recommended alternative to US 101 is the Three Capes Scenic Drive. It is occasionally crowded with bicycles but is otherwise blissfully empty of traffic. Nick & I enjoy a lunch in Astoria, then cross the long bridge into our home state of Washington. Just as on the southbound leg of the trip the weather forecast in our home state was for rain, so once we approach Olympia, we opt to hit I-5 and bee-line home for Arlington. Sure enough as we near our home the rains begin to fall. 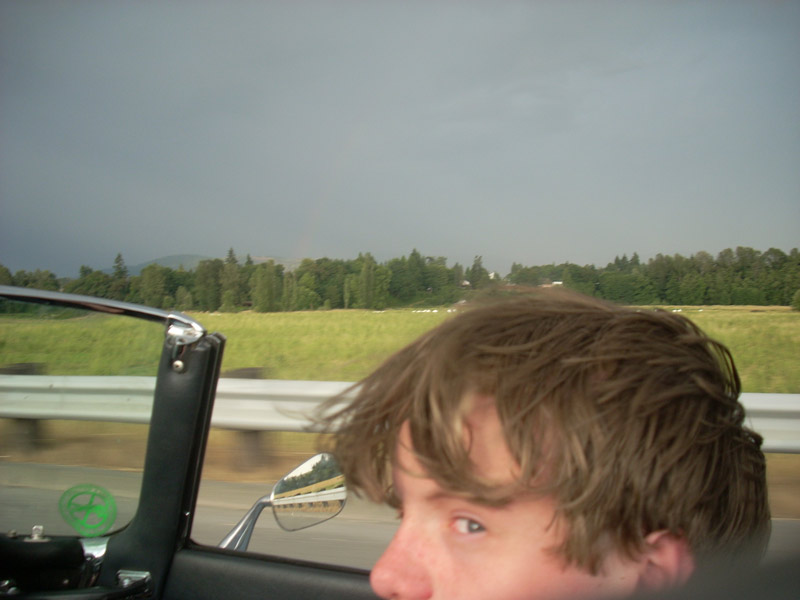 Arriving home is, as always, bittersweet. These almost two weeks on the road with my boys are so amazing that I didn’t ever want it to end. The car however needs to be fixed (I have a new starter installed with the help of both my boys within 10 days, just in time for the Monte Shelton Rally in Oregon) and I have to get back to work. Each of my sons has a unique personality and makes for very different traveling companions. Given the chance I’d hop in the car with either of them and drive off for parts unknown. Traveling in a vintage car is a reward in and of itself, but doing it with my kids makes it so much more enjoyable. While I doubt we’ll be able to repeat such a lengthy journey anytime soon, I hope to make many more with them individually whenever the opportunity arises in the future. Even if the car breaks (as old cars are wont to do) we can tackle most any repair, and we’ll get to know the car, and each other better along the way. As I stated at the beginning of the series this is the best way to get young people interested in old cars. Go on a road trip with the next generation of potential enthusiasts. Let them experience first-hand the joys and occasional trials of vintage motoring. Old cars are things to be used and enjoyed, best of all with your children.