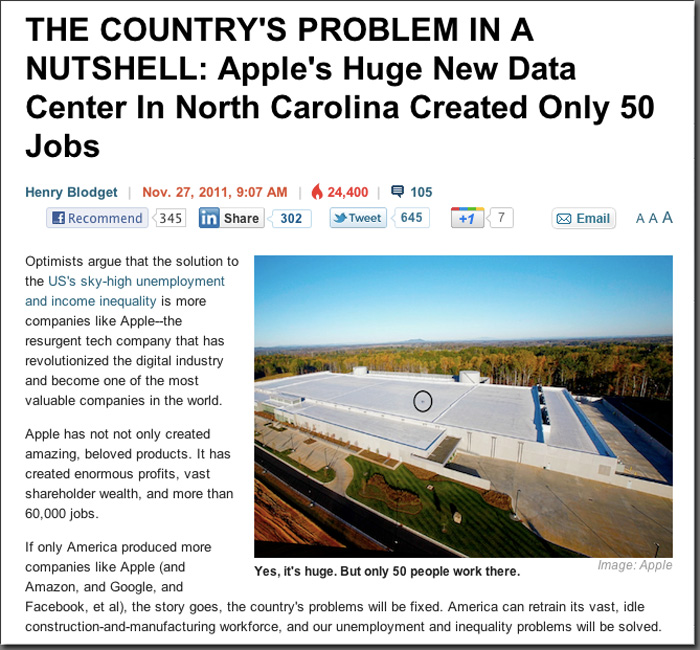 Don Montalvo (who knows me via Mac-Mgrs) shared a link with me on Twitter and asked my thoughts on the subject of economic impact of large scale datacenters in rural areas. I’ve written about the importance of, and the ideal sites for datacenters in rural America before, but I’ve never touched on this line of thinking that seems to be popping up more and more often, and is exemplified by this article:

“Datacenters are a boondoggle for rural America because they don’t produce more than a handful of jobs.”

In the article Don shared with me the target is Apple and its datacenter in Maiden, North Carolina. But I’ve seen the same sort of meme bandied about for Google, Amazon, Facebook, and every other player in the large-scale datacenter game. This whole line of thinking is fundamentally flawed in two major ways: It focuses on numbers without looking at value; and it is founded on an economic fallacy. It represents lazy journalism – slapping preconceived notions onto a situation without any real effort to find facts or report truth.

Datacenters do bring huge numbers of construction jobs. The cost of building a datacenter is often 10X more than a comparable-sized building. These are not simple warehouse-style buildings – they are specialty structures using high-value materials and extensive electrical and mechanical systems. They take far longer to build than comparable-sized structures. Datacenter projects often last for years, rather than the weeks or months required to build a an office building, store, or a warehouse. They employ hundreds of electricians, plumbers & pipe-fitters, sheet metal workers, ironworkers, concrete specialists, fiber-optic techs, and many other trades. Most of these are high-paying, Union jobs. When a Datacenter project lands in a small town the economic impacts are significant. All those construction workers have to live, eat, shop, drink, and recreate locally. They often bring families into town with them as the project has them there for at least a year, perhaps more. Very few, if any journalists ever even think about these facts, much less report them.

Once construction is complete, the number of people required to run the facility is much less, yes – BUT the assumption that all the jobs will go to “outsiders” is patently false. Most of the jobs in modern datacenters are not highly technical. The majority are usually related to facility maintenance; electricians, HVAC techs, etc. and physical security. There is rarely reason to ever have to hire these skills from outside. Yes, some percentage of the jobs require substantial high-tech experience, but the primary responsibility of datacenter technical staff in a large-scale facility is server repair, and any journalist who thinks these skills are only found in Silicon Valley or other major metros is a decade or two behind the times. In the project I’ve been involved with, only a handful of us were hired from elsewhere; the majority are local-hired. The bottom line still shows a net increase in jobs. These jobs are also far better than the old mill and mine jobs they replace. They are safe, high-wage jobs in a high-tech industry. Fifty jobs in Maiden, NC (and Quincy, WA, and Forest City, NC, and Prineville, OR, and Council Bluffs, IA, and…) are far better than zero new jobs.

Then there is just plain fallacy and flawed logic. “The jobs are gone, we have to get them back!” Every era of industrialization has seen transformations that have killed off entire categories of jobs and marketable skills. Every generation sees the death of careers: thread spinners, grain reapers, candle makers, telephone operators, punch card sorters. I’m certain that as technology moved forward a journalist wept ink over the loss of so many jobs as the need for that specialization dried up and then vanished. But as technology changes, so do the jobs. My grandfather, when he was a boy, dreamt of being an Oxcart Driver. Before he turned 20 that career was extinct. The actual fact of the matter is that jobs have been lost since the dawn of time. This is because human needs and technology are in a constant state of evolutionary change. Smart people don’t weep for lost jobs, they just move on to the next one. I work in datacenters, and I’ve often told people that “datacenters are the sawmill of the 21st century” in reference to them springing up in small-towns all over the USA. But I also know that datacenters could very well be gone in forty years – completely extinct. Maybe even twenty years, replaced by some other technology. Will the Henry Blodgetts of 2032 be crying over the lost Datacenter Sector jobs? Of course they will, because nobody recycles stale ideas better that so-called “Top-ranked Business Experts & Analysts” in the journalism trade.

One thought on “Economic Benefits and Flawed Logic”