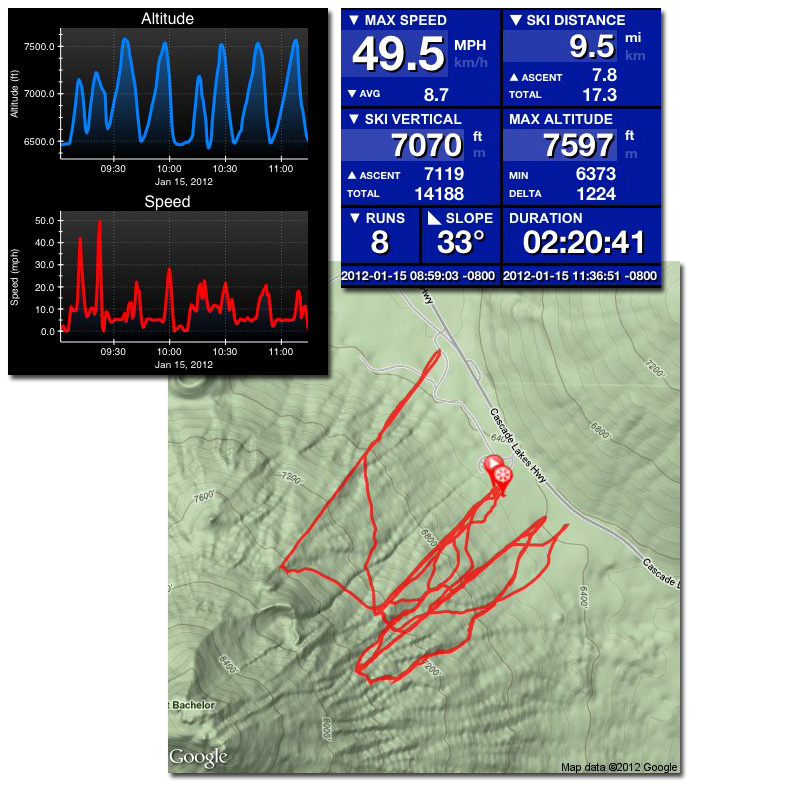 I usually ski every Saturday, but decided to skip yesterday. It has been a long time since we’ve seen significant snow around here, and Saturday was clear and windy. (VERY windy.) I stayed home and did some document archeology concerning something I’ll talk about soon. That wind brought us a gift though…

Today I awoke to a dusting of snow on the ground and the mountains west of us wrapped in dark clouds. Temps were very low, but the wind was gone. I tossed the ski gear on and dashed up to Mt. Bachelor to arrive in time for the lifts opening. Per usual, I parked at Sunrise (shorter walk to the lifts!) and was one of the first 20 people on the hill. The runs off Sunrise were groomed the night before, so I headed east to my favorite lift, the Rainbow Chair. Rainbow is normally unloved. It is an old, slow triple rather than a swift new detachable quad lift, so it sees very little traffic. I love it though because it covers a ton of vertical, including some near-timberline chutes high up on the east face of Mt. B. From the top of Sunrise I crossed over and took the run I-5. I-5 is a wonderful cruiser which had also been groomed the night before, so not really what I was looking for. Riding the old Rainbow chair up into the clouds I traversed east to the top of Flying Dutchman.

The snow… was sublime. Nice firm base, with anywhere from two- to ten- inches of light, fluffy powder depending upon wind-loading. A mere handful of people had been on this run, and it was possible to carve fresh turns on many lines. The snow was deep enough to allow you to aggressively ski the fall line without building too much speed. Perfect powder really. I made many linked turns through several chutes down into the trees where the run normalizes into a cruiser. It was so good I skied Flying Dutchman several times over. Once it became carved up I skied Rainbow’s lift line seeking untracked expanses. Feeling like I’d carved it all up after 4 trips, I started heading west, hoping to hit the long, steeps of the Northwest Express. While riding the Skyliner Express I heard from folks who had just been over there who disappointed me with news of wind-slab and slick conditions. I bailed off to the left, took the Cliffhanger chute down to the road that cuts across the mountain to the Summit and Sunrise lifts, and once again took the Rainbow lift line; another run down the Dutchman, and then down off the mountain to the Sun Bar for a rest to warm my now-frozen toes.

The base was now swarming with people, with the word now out that it was a Powder Day, so I took my Seasons Pass holder’s privilege of heading home – Satisfied that I’d skimmed the powdery cream off the mountain.

It is supposed to keep snowing all week.