Everyone complains about it. Even me.

You would not know it from this site, but if you’re friends with me on Facebook, you know that I ski. A lot. My parents have been skiers, and started me very young. I actually have no memory of learning to ski. I just ski. We did the same for our two boys, who started skiing (on every visit to their grandparent’s house) soon after they could walk. My parents skied until very recently, in my father’s case into his eigthties.

Having a life-long sport is a great thing. In the 1980s I used to play hockey every Tuesday night with a bunch of old guys who had been playing every Tuesday night since the 1950s! I was a goaltender and they bent their rules to let young guys play with them, provided they were goalies. There are no old goalies. The position is very physically demanding, and sure enough I was forced to quit goaltending in my thirties when my doctor told me “if you want to be able to walk when you’re past sixty, you have to stop abusing yourself like this.” The “like this” was the damage I was doing to my knees and hips playing goal. I continued skating and participating in ice hockey as an on-ice official until I was about 40, but eventually gave it up due to just overall hockey fatigue. The “professional” Hockey I Refereed in the UK didn’t help, as it really burned me out. The travel. The cement heads. The odd mix of competance on display every game.

But skiing? I hope to ski as much as I can before I die. I love skiing. It makes my heart fly when I glide down a hill on snow. It makes me feel very much alive. Like being in love.

My life, in terms of skiing at least, got so much better when I moved to central Oregon in 2010, because it put me in very close proximity to a world-class ski area. Back home in the Seattle area, the commute to the local ski areas over time became as onerous as the commutes to work as the Puget Sound region’s population exploded in the 90s and 00’s. I quit buying season passes after the 98-99 season since I could no longer bank on being able to get up to the mountains every week. Instead we had our annual week/10 day trips to Colorado to visit the entire Goolsbee Clan. “Camp Carol” we called it, after my mom, who hosted the whole affair.

But here in Oregon? I’ve bought a season’s pass every winter without fail. In 2010-11 I only managed a dozen days on the hill due to work and family commitments. Since then I’ve upped my totals season over season where I could.

Not this year though. In November I suffered a recurrence of a herniated disc in my back. Same spot that I had in 2008. Of course the season started with a bang. Snow began falling in the mountains in September(!) and continued through until mid-November when the mountain opened almost two weeks earlier than planned. Meanwhile, I was flat on my back downing antiinflammatories and watching the conditions reports with extreme jealously.

By mid-December I was starting to feel better, but conditions suddenly took a turn for the worse. The dreaded “Pineapple Express” arrived, with warm, wet weather and even worse, the “R-word” happened up on the mountain… from base to summit! Rain does terrible things to snow. “Decimated” is a term for losing one-tenth of something. Our snowpack lost close to 90% of itself in the rain.

Thankfully, our storm cycles can normally repair that damage quickly, as it is typical to see multi-foot dumps of snow over a week or two. But not this year…

The sun came out, and a high-pressure system parked itself off the coast of the Pacific Northwest. The temps went up to late-summer averages. While it was pleasant, it wasn’t helping the ski season much.

We took a trip to visit the family in Texas over the holidays and on one of the four flights required to get there and back I caught a cold. One of those pervasive colds that hit you like a ton of bricks and linger for weeks. DayQuil & NyQuil kept me sedated and the cough suppressed, but I was pretty miserable through all of January and into February. I think I finally stopped coughing just a few days ago.

So my 2018 ski season has been limited to just five days so far. Only one had any fresh snow, and that was only about 6cm. The mountain is like going back to my hockey days, only the rink is tilted up to 36°.

It has been so warm and sunny that I finally took the snow tires off the winter beater two weeks ago. had to take a trip over the mountains to Portland recently, and drove the BMW… WITH THE TOP DOWN. I haven’t even had a fire in the wood stove since November. Too warm.

It is President’s Day Weekend as we speak, which means in terms of crowds, it is a total shitshow on the hill. So I’m staying home. But, yesterday the weather changed. Winter is back! Woke up this morning to a dusting of snow on the ground, and more in the forecast. 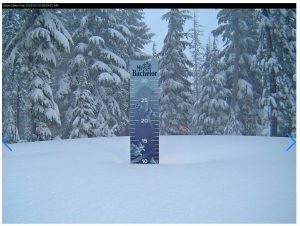 Today I’m putting the snow tires back on the car, and as soon as the holiday weekend crowds have left, I’m going skiing!