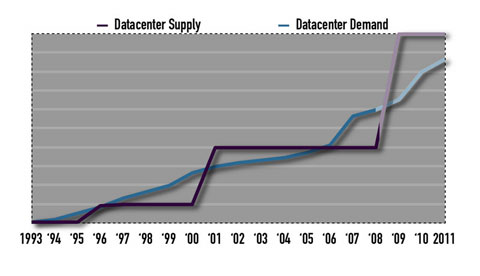 Note: This is something I zipped off just now to “Server Specs: A SearchDataCenter.com blog” after I had a conversation with Matt Stansberry via IM. He was bugging me about not writing anything for a while, and I claimed how busy I was. Then we were just casually conversing about some industry trends when I made my “ramps and staircases” analogy. He said something like: “If you had typed that in WP instead of IM it would be published!”

True enough. So Sunday before we went out to get our holiday tree I cranked this out. After sleeping on it I added a few bits, then had a couple of trusted friends (writers both) rip up my grammar and wording and put it back together looking much more polished (Thanks Bill & John!) So if market analysis is your thing click “more”…

Boom, bust, drought, and recovery, and now boom again. Is bust next? If so, when?

This post on Rich Miller’s DataCenterKnowledge.com got me thinking about those cycles, and the whys behind them. Mind you, I am not a journalist, nor an analyst sitting on the outside looking in, I am right in the thick of things working “in the trenches” of the data center economy. I have seen every one of those steps in the cycle in the last decade, while building, filling, moving, decommissioning, and expanding data centers. Demand of course is what drives the need to build facilities and demand is high right now when compared to the supply of data center space. Reading the trade press you see announcements every day of this company or that one expanding existing data centers, or committing to build new ones.

It was only a matter of time before analysts and journalists began asking and speculating about the next phase in the cycle. When will there be too much capacity? When will the market demand drop? Will supply outstrip demand? How much is too much data center capacity?

Speaking from a position inside the industry they are asking the wrong questions. Typical for analysts, especially the financial and investment sort, they are thinking of the right now, the next quarter results. If they would switch their macro lens for a wide-angle they might realize some simple truths about this business.

Demand
Conventional wisdom says that strong demand is what is driving growth, in the form of data center construction right now. It is also what drove the data center building boom of 1999-2001. However, if you look at demand from a long view, it has grown in a very linear fashion since the initial spark of the web-driven economy in 1993. The growth in the number of web servers has been steady, even through the “bust” days of 2001-2005. The Internet did not cease growing, rather, the rate of growth lessened slightly. There is no curve on the graph, just a long ramp at varying angles. Sharp inclines occur in 94-95, 99-01 and 06-present with shallower inclines at other times. The only graphs that have declines are those tracking pricing and players. Prices plummeted in the bust of 01-02 and are only now going up again. The same goes for players on the field. The bust of 01-02 left a lot of dead bodies. The companies died, but in many cases their carcasses, in the form of their datacenters, remain.

Supply
The data center growth graph may be a steady ramp, but the capital required to expand or build a datacenter is more of a staircase graph. Building data centers is an EXPENSIVE exercise. Significant amounts of money are involved, especially when commodities are in demand and prices are high. During the last boom fiber was one of the expensive limiters. Today the price of raw copper (for electrical infrastructure) and the scarcity of Diesel generators are the most acute pain points. The frequently quoted metric is $1000 per square foot to build a data center, however, building a facility to meet the current electrical and cooling demands costs much more. It is estimated (though not confirmed) that Google spends three times that figure on their data centers.

Where does this leave the data center operator? Spending only when the capital is available. If the analysts on Wall Street were smart, they would have been telling the investment community to put money into data centers between 2002 and 2006. Unfortunately they aren’t as smart as their salaries would seem to indicate. Trying to find capital to build or expand a data center at that time proved harder than finding WMDs in Iraq. The supply curve was on the flat of the staircase-shaped graph.

The demand ramp passed the supply staircase about eighteen months ago. Those mothballed “carcass of the bust” facilities were the first to be turned up as the demand incline grew sharper, mostly because the capital required to upgrade them, or in some cases just finish them, was suddenly available. Data centers built in 1999-2002 are just now showing profits, but they were also built to older specs, and are unable to manage the density that current deployments demand. This means they are approaching capacity, requiring more data center construction. That requires big bucks.

Now the big money is flowing, so data center operators are building what they can, while they can. The graph is on the vertical and looking to cross that steady demand ramp. Are they overbuilding? Of course they are. They are banking space now to tide them over after the capital flow stops, because it will stop. If history is a guide, the stop will come sometime in the next year or two. The valuation of Savvis is just the first hint that it is coming. We will have to be content with what was built, because the capital will stop flowing and we will coast along on that flat line until the demand ramp passes the supply and the investment begins again.

Market Maturity
Data centers being built today are going to exceed the current demand because they must continue to operate through the next cycle. It is a crazy system. A crazy system driven by simple factors. Unless we can find courageous investors who think further ahead than the next few quarters, we are stuck with it until the market matures. So is another bust coming? Yes, because the system dictates that one must. But in reality it is not really a bust as much as the point where the supply and demand curves swap positions. If you look at history and examine the infancy of any capital- and construction-intensive modern service industry, be it railroads or aircraft, or even telecommunications, you will see these curves swinging and intersecting in boom/bust cycles that modulate towards stability in the long term as the market matures. This is a very basic view, not taking into account other economic factors such as market and commodity prices; growth, failure and aggregation through M&A; technology shifts, and the like. Just basic Econ 101 supply and demand. Eventually the investment community will realize that it can not dump/withhold capital based on their limited perception of the market. Investment will smooth the supply staircase into a ramp that hopes to stay just ahead of the demand ramp. The very definition of a stable market.