I’m a hockey fan. I was a player and an on-ice official for most of my life, and now… well I’m old, and slow, and am content to just watch. I can watch any hockey game, be it NHL, NCAA, or Junior hockey of any sort. I love the game and its almost constant flow, finesse, and yes… its brutality. From having watched tens of thousands of games from on the ice, in the stands, and on TV, I can sense the game itself. I often know when a goal is going to be scored beforehand – mostly because I know how to spot the mistakes that lead to goals. I can honestly watch any game and get enjoyment from it, however about thirty years ago I picked a single NHL team to become a fan of… entirely due to proximity.
END_OF_DOCUMENT_TOKEN_TO_BE_REPLACED

This photo (of and by my fellow Goaltender Wil Wheaton) best represents today’s Olympic Gold Medal game in Men’s Ice Hockey that wraped up the 2010 Winter Games just over the border from me in Vancouver, B.C. If you missed it, you missed an epic game, filled with more thrills and excitement than can be described. Team USA came back from a 2-0 deficit and tied the game with 24 seconds to play. This forced the game into overtime.

Overtime. Sudden Death. It is how the ultimate games should always finish. Play until you score. None of this shoot-out stuff. The 1994 Olympics in Lillehammer, Norway ended their Gold Medal game with a shoot-out after overtime expired, with Sweden edging Canada for the Gold. As a hockey fan it was awful to watch, as games should be played to win, not forced into an artificial conclusion via a shoot-out. Overtime play however is never artificial. It is thrilling beyond belief because it is real, it is intense, and the end can come at any moment. Some of the best games ever were decided in overtime. Many have become legend: The Easter Epic. Bobby Orr’s flying goal on May 10, 1970. The Miracle on Manchester. The “Monday Night Miracle” in game 6 of the ’86 Conference Finals. The epic goaltending battle between Hasek & Brodeur in the ’94 Playoffs (both had shutouts going, and Buffalo won in the second overtime 1-0 over the New Jersey Devils.) The five overtime Flyers-Penguins game of the ’00 Playoffs. The Canucks quadruple-overtime win over Dallas in ’07.

Nothing is more thrilling than overtime hockey.

Team USA played very well today. Our Goaltender Ryan Miller won a well-deserved tournament MVP award. They put on a show that nobody expected, and that delighted everyone who watched. They played their game, and took the heavily-favored Team Canada right to the very brink. Thank you Team USA. You earned every ounce of the silver around your necks, and then some. 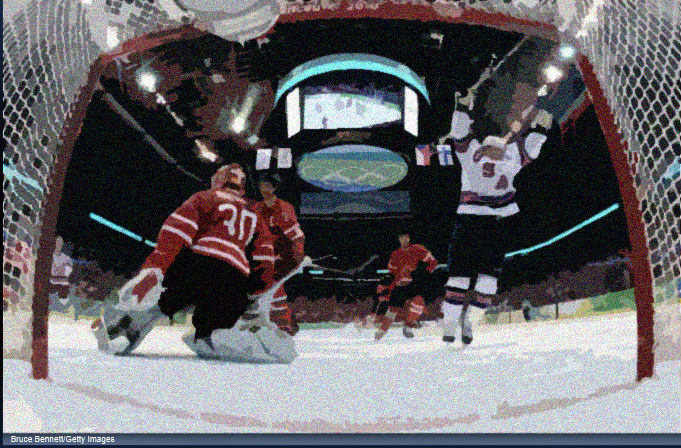 My throat is sore from yelling. I frightened my family tonight. First Sue, who was reading abook on the couch when Team USA scored their first goal less than a minute into the first period. Then eventually everyone as I screamed and yelled through one of the most exciting hockey games in a long time.

I’m normally a rather quiet person. I’m also not much of a sports fanâ€¦ I didn’t even watch the Super Bowl this year, or any of the past several years now that I think about it. I usually go skiing on Super Bowl Sunday, or work on my car if the snow conditions in the mountains aren’t right. But when Olympic Hockey comes around, I get very vocal.

I watched every game of the 1980 Olympics, long before it became a “Miracle.” I recall stressing through the 2-2 tie with Sweden in the first game at Lake Placid and thinking that Team USA might really have a chance. Their hard-charging style and gutsy play (IIRC they tied the game at the very end by pulling Craig out of the net) was inspiring to watch. Maybe even a medal? Then everything started coming together. The last-second tying-goal at the end of the 1st period of the game against the USSR was one of those moments I’ll never forget. You could see the Soviets just did not take the competition seriously, and that goal scared the hell out of them.

What a lot of people don’t recall was that the famous showdown with the USSR was NOT the final game. Team USA had to win one more game to seal the medal.

Tonight’s USA vs. Canada game was not the medal game either. The win doesn’t have much significance in determining medals at all. It was however a triumph for USAHockey. Canada came into the tournament heavily favored. Everyone knew that tonight’s game was the closest match up expected in this year’s Olympics, but even here Canada was expected to win.

What a game. If you missed it, I have to tell you that you missed an epic. Team USA came out flying and just plain out-hustled Team Canada. Within seconds they had shots on goal, and within a minute they had scored. Canada eventually evened the tally, but the USA answered with another goal to end the first 20 minutes with a 2-1 score. The second period was really a mirror image of the first, with Team Canada looking much better, and seemingly winning every footrace to a loose puck. Thankfully Ryan Miller, the USA Goaltender kept them in the game. The final period of play became a complete barn-burner. By now my screaming had the whole family around the TV watching with me. Sidney Crosby of Team Canada scored with 3 minutes remaining, bringing the score to 4-3 in favor of the USA. Despite TeamUSA looking tired and flat-footed for much of the third period Miller stood on his head when he needed to, and even though Canada pulled the goalie in a last-minute bit of hustle Ryan Kesler out-skated two Canadians to make a heroic effort to bat the puck into the empty net to seal the win.

Due to the intrusion of pros, Olympic Hockey has lost a tad of its luster for me, but none of the excitement. Tournament hockey is always the best kind of hockey. To play or to watch. It carries an intensity not found anywhere but perhaps the NCAA Finals or the Stanley Cup. Unlike those however, these guys are also playing for their country, on a world stage. Tonight’s game was a tremendous example of that. To Team USA, well done! Well done indeed. From the guys at Cold Track Days, here’s your lineup:

I’m not in France at the moment, so I’ll be catching what I can on Speed TV over the weekend. Stanley Cup Game 7 and Le Mans, all on the same weekend!

People literally walk on water! Last guy to popularize water-walking got a religion built around him. That guy was Rocket Richard; the religion is the Montreal Canadiens.

via A Friend of the Hockey Court – TIME.

Tip of the hat to Wil Wheaton for the link, via twitter.

As an ex-goaltender this is painful to watch. In Toskala’s defence these are very tough shots to stop, but I gotta say, he should have got in front of it and not tried to catch. Doctrine says, take it in the chest and then sweep it off to your D with the stick.

Oh well. I bet he never makes this mistake again!