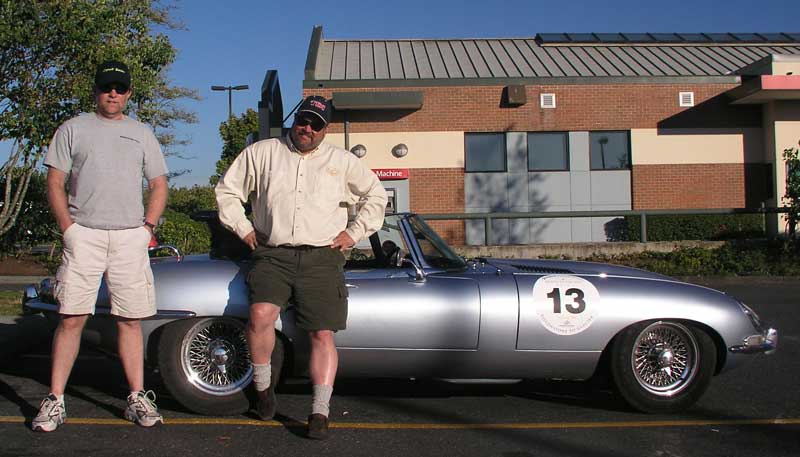 Above: Brian Medley and myself arrive in Monroe, WA, where Brian’s wife picked him up.

The final day, September 11, 206 we woke up in Kalispell, Montana, and went to sleep in our own beds. Me in Arlington, WA, Brian in Sammamish, WA, and my Dad in Colorado. Mom & Dad drove their truck from Big Sky to their plave in Vail, while Brian & I left Montana, went through Idaho, and Washington along US Highway 2. A great road.

I woke up a couple of hours ahead of Brian and worked on some photo edits and website work while he slept. Once he woke up, we hit the road almost immediately. We decided to have breakfast in Libby, Montana, where I’d had lunch with the rally a few days before. We arrived in Libby, at breakfast at a small cafe, bought 3 quarts of Castrol for the Jaguar (which promptly drank two quarts), and motored west through Idaho, with Brian at the wheel.

Brian drove from Libby to just west of Spokane, with me catching a nap here and there, and occasionally shooting wrap-around composite photos, which I’m sure drove Brian nuts. You will note there is something unusually similar about these two pictures. 😉 My only issue with Brian was that he drove too slow, but hey, I’m sure he was just being conscientious since this was a nice car, and this section of the drive was perhaps the most densely populated.

Brian lived in Spokane for several years so knew a shortcut around the main part of the town. Highway 2 goes right through the middle of the city with a “Aurora Avenue” style string of traffic lights, so we bypassed downtown Spokane via a route around the northwest quadrant of the city and arrived back on US 2 out near the airport. We gassed up and switched drivers and I thoroughly enjoyed the run west on US 2 through central Washington. I had never driven this section of US 2 and was surprised at both the quality of the road surface and the scarcity of traffic! After I was able to work my way to the front of a pack of cars stuck behind a few slow moving vehicles, I put the hammer down and had the 65E chewing up miles like nobody’s business. The only time I dropped to the limit was approaching towns where the limit dropped to 25 MPH or so. But once out of the town and into the open road, back went the speedo to familiar territory in the upper reaches. A ways into this, I looked in my rear view and saw a black car approaching very fast. I asked Brian to keep an eye on it. When it got within a quarter mile or so I took advantage of the reverse slope of a hill to brake hard and drop us down to just above the speed limit and let the fast approaching car reveal itself. Turns out it was just a Dodge Neon with somebody in a big hurry at the wheel. They passed us and I waited until they got about a quarter mile ahead and matched their speed. A rabbit! I love that. With a good detector it is the best possible situation for high-speed runs. They take point and most of the risk, and you can run like the wind. After a bit of this my rabbit either figured out what I was doing, or lost their nerve, and slowed to 75-80 MPH. In turn I rode up behind them but did not pass. Hoping to psych them into taking off again. No dice… or at least so I thought, when a County Cop crested the hill ahead of us, radar off. Both us braked instantly down to the limit, and it is obvious that this sighting set off the “D’oh!” alarm in the Sheriff’s head. Within seconds after passing us my detector announced that he’d turned on his radar. Too late to tag us, but I also knew that he continued east, and did not turn around. The sighting did spook my rabbit however, and they completely lost courage. Emboldened by my Valentine I happily passed the Neon and took the rabbit position and once again revved the XK up to “ludicrous speed.” The road was gloriously empty, with only the occasional town to slow us to a limit. Through the Coulee and Pothole country and shortly to the Great River Of The West itself. On the downhill grade to the Columbia we ran into some traffic and managed to make some passes that left the Neon far behind. The time between Spokane and Wenatchee seemed to fly by.

We stopped for a late lunch in Leavenworth. We had burgers at Gustav’s, a great place. It was a nice leisurely lunch after a hard driving day. Only the short hop over Steven’s Pass awaited us. We both called home and informed them of our proximity. Brian arranged a pickup in Monroe, a few miles from US 2’s terminus in Everett. Monroe was a perfect departure point as it was at the edge of Pugetopolis, and easy acces to both Sammamish and Arlington. Especially goodfor me as I can take little-used back roads north from Monroe through the foothills to Arlington.

I took the wheel for the sprint over the pass, and enjoyable run up Tumwater Canyon, then up to the ski area at the summit, then plunging down to the Skykomish river and out of the mountains and to Monroe. We met Brian’s wife at the Burger King along US 2, said our goodbye’s, and I topped up the 65E’s tank with some high-octane fuel (it was still knocking from that tankful of 87 octane in Helmville, MT) and ran up my usual “back way” to Arlington and home. 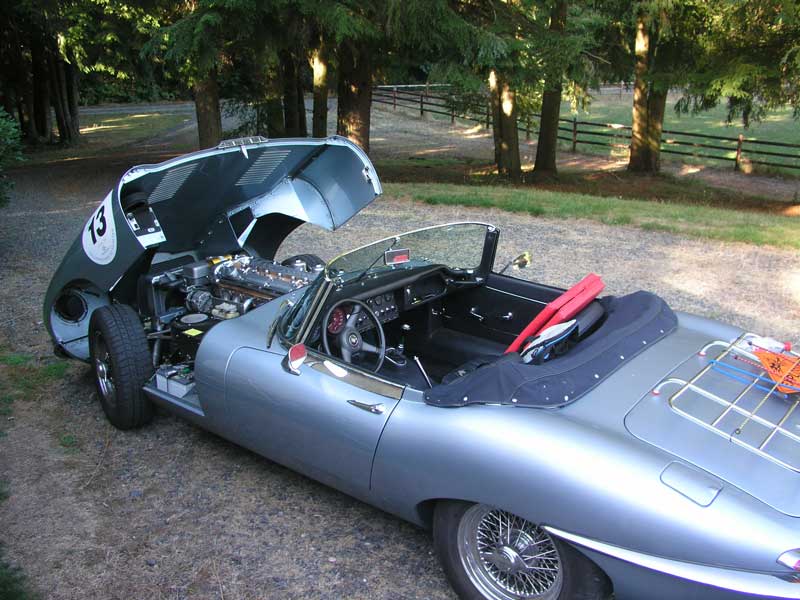 Above: The 65E cooling down in my driveway after the long hard week of running all over the Northwest.

What a great week. What a wonderful vacation!

Big thanks go to:

My Dad, for getting me hooked on cars, and being my co-driver for this event.
Jim Sitton, Farnum Alston and the whole GTTSR crew for putting on a rally in the great state of Montana!
Close enough to drive too, far enough away to be a real vacation!

Brian Medley, for taking the time to come along. A great travelling companion.

Most of all to my wife and family for letting me go. 9/9/06 was my 18th wedding anniversary, and I was absent, out having fun in my old car.