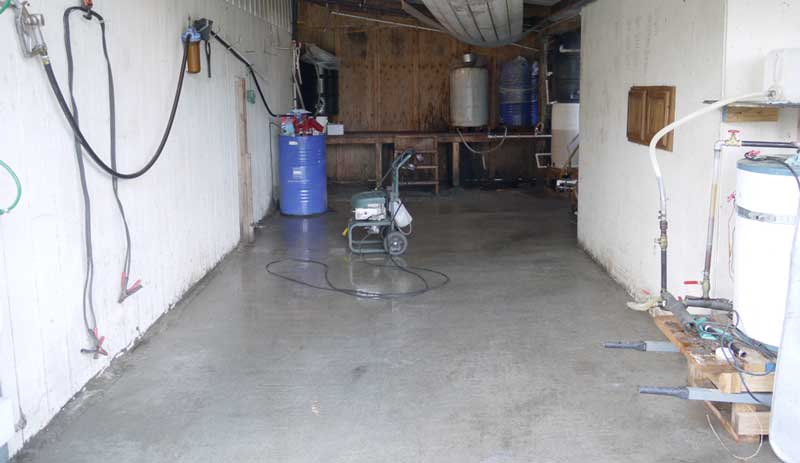 Since it is summer and the weather is warm, and since I’m planning to be away for about 10 days I figured the time was right to do a “summer cleanup” in the BioDiesel refinery. This is easier said than done, as shutting down is a difficult process. From start to finish BioDiesel takes several weeks to make. Cleaning any part of the system requires that it be offline and empty for the cleanup. So over the past several weeks I’ve been doing a sort of ‘rolling shut-down” of the system. I started at the beginning – the settling tanks. This is where waste oil goes into two large barrels to sit and settle out. Water and food particles settle to the bottom. The barrels are inverted and have twin drains, one set flush with the bottom of the barrel, the other extended up about 6 inches or so above the bottom. One at a time I emptied them out (making BD all the way) and cleaned them when done. I actually took the opportunity to swap in a new barrel for my oldest setting tank. I used to have a 30 gallon poly barrel, now it has been replaced by a 55 gallon olive oil barrel. You can see it at the back, it is the blue one on the right. I fill from the left side via a large funnel, and the barrels self-level between themselves. Next I dismantled the wash and dry tanks and cleaned them up a bit. Neither were in bad shape, unlike the settling tanks. Finally I Drained the MeOH recovery system and am in the process of transforming it from a prototype to a finished and refined item. This means relocating it to a position near enough to the processor to plumb it directly downstream from it. This will clean up the process a lot. That will have to wait until I get back though.

What I’ve done recently though is wash down the whole area. Due to veggie oil spills the area where I work was filthy. You could literally no longer see concrete on the floor, it was one big stain, combined with a lot of ground-in dirt and oil-absorbent that I’ve used to clean up spills. I pressure-washed, which did a fair job. But the miracle trick was taking a bit of the Potassium Hydroxide (KoH) used in the BioDiesel process and spreading it on the wet floor. KoH is a cleaning agent used in brewing and wine-making. It does an AMAZING job of breaking up the oil in the surface of the concrete and allowing it to be washed away. I used probably less than a cup of the stuff, just lightly sprinkling it around the wet floor and sitting overnight. Gently hosing it off in the morning, followed by a second application where I missed the first time. After a few days I went back and pressure-washed again. Look how clean it is: 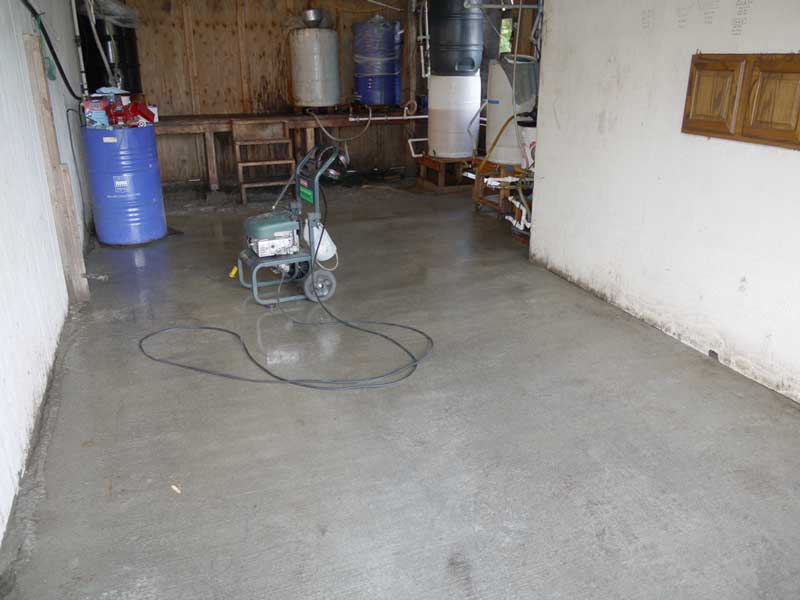 I’ve started re-filling the settling tanks, with the goal of being able to start refining again upon my return. Of course what did I do to my nice clean floor already? Spilled some veggie oil of course! sigh.