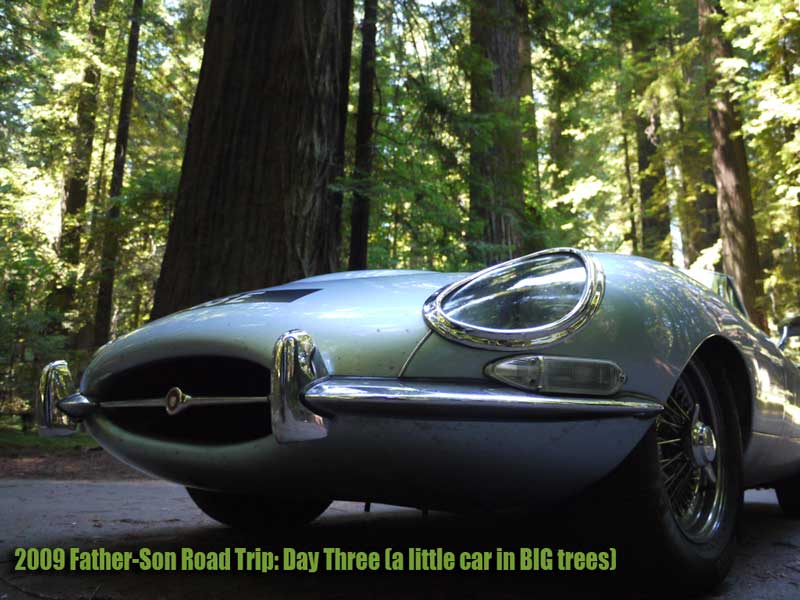 We awoke very early at our campsite and showered before most of the other campers were awake. We timed it just right as most were waking up by the time I fired up the big XK motor and idled out of the campground and south on US 101. 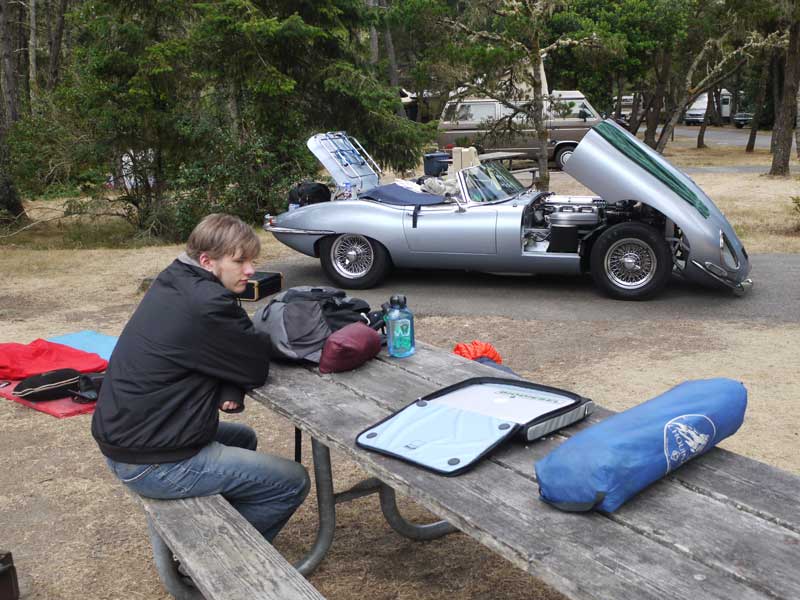 The sun was not quite up, and the fog was pretty thick. Thankfully we were well bundled up. A pleasant surprise awaited up a little ways down the road when the fog rolled back of the coast and the sun burst through: 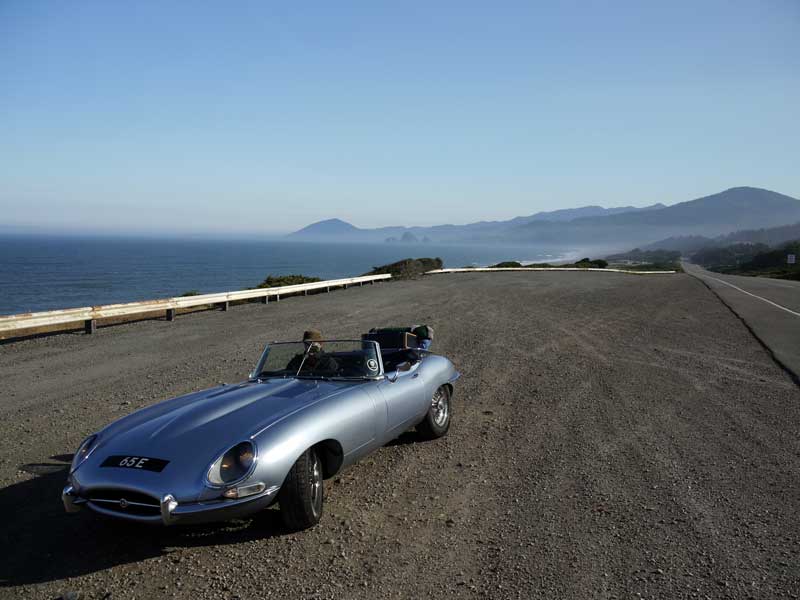 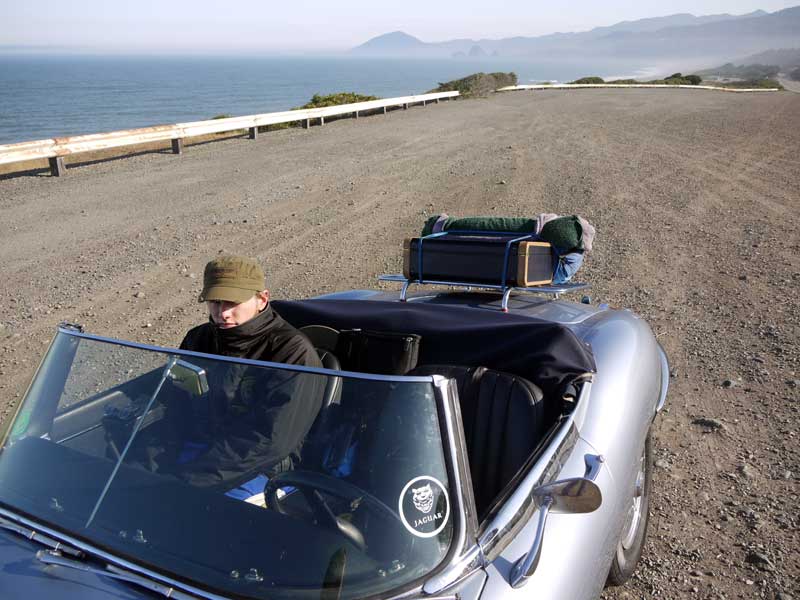 It provided very little warmth, but at least made for more pleasant views. It didn’t last long however. It was very cold. The bone-chilling cold that comes with coastal fog. We felt it. The car felt it. 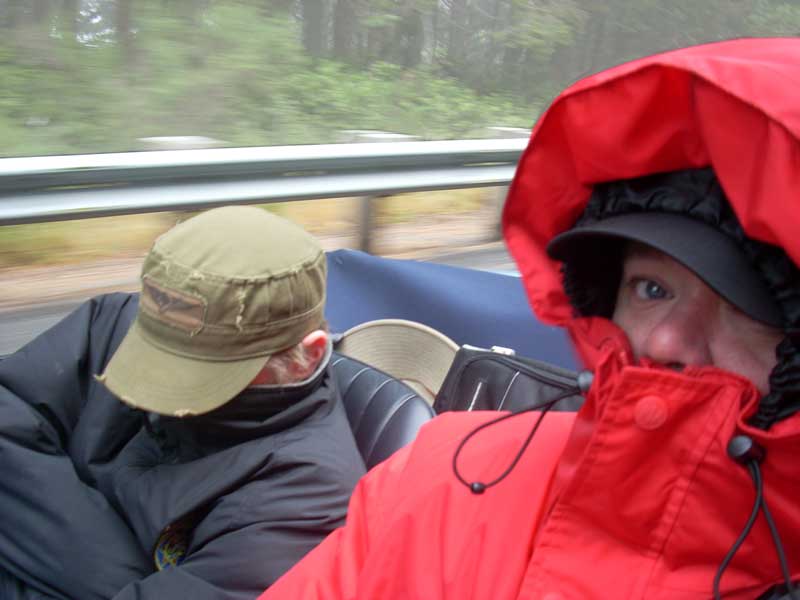 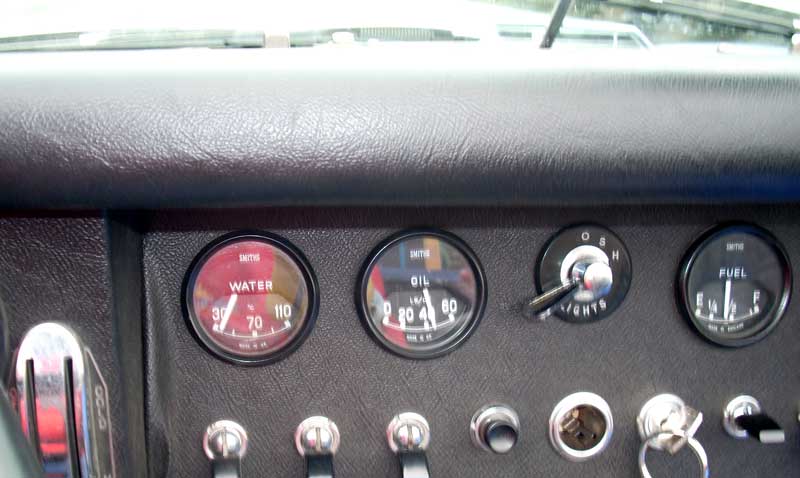 The car never really warmed up and was running a little rough. It wasn’t just a cold-running rough though… it just felt a tad odd. As Chris semi-slept beside me I tuned my listening to the engine music and exhaust note of the car and soaked it in for 30-some miles. It sounded as if one cylinder wasn’t firing well. I’m not really equipped for significant diagnosis while on this trip, but I did recall it has been a while since I changed, much less looked at my spark plugs. I knew that right before the California border we’d pass through a sizable town called Brookings. Sure enough they had a NAPA, so we pulled in. 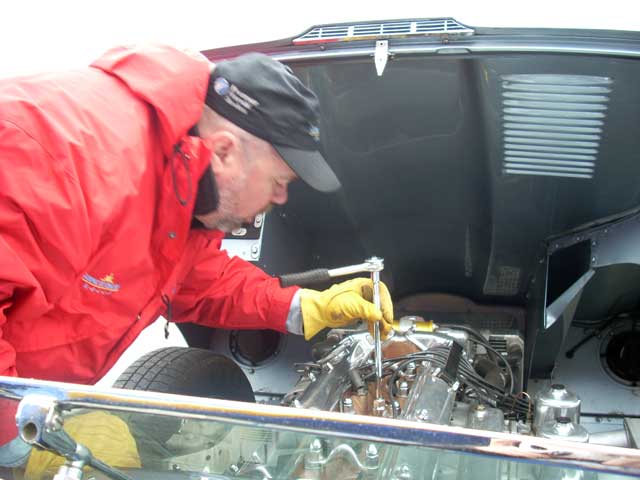 I pulled the plugs and as I suspected one of them was looking pretty grotty (#5 cylinder) I went ahead and bought a 4-pack of NGK plugs to match the two I had in my toolbox (when you drive a 6-cylinder car you always end up with two spare spark plugs every other time.) The car fired up and ran quite a bit better. 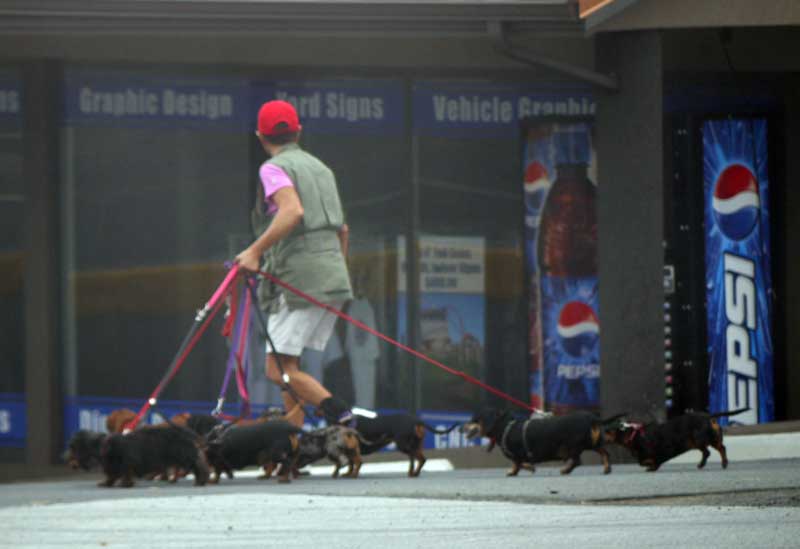 As we were doing this work a strange sight appeared before us twice. Across the street an older woman walked by northbound with a huge pack of dachshunds. She was yelling at them constantly and seemed to be a tad … whacky. A bit later she returned going southbound and I snapped off the shot above to illustrate the situation for you. It is a shame I don’t have a movie feature on my telephoto-equipped camera so you could soak in the full multi-media spectacle.

As we crossed over into California, the “are you carrying any fresh fruit” ladies said to us instead “You guys look like you could use a little sunshine!” I replied “This is California, have you got some?” “Sure, just down the road…” so off we went and as promised about 6 miles down 101 the sun came out. I sent a twitter ahead of us with my cell phone to Greg Gehr, a Mac IT guy I know in Eureka to see if we could meet him and his wife Susan for lunch. As we arrived in Eureka I pulled over in front of a brewpub and called Greg on the phone. Ironically his office was a couple of blocks away and he suggested we eat at a great brewpub he knows. Equally ironic: it was the place we were parked in front of! 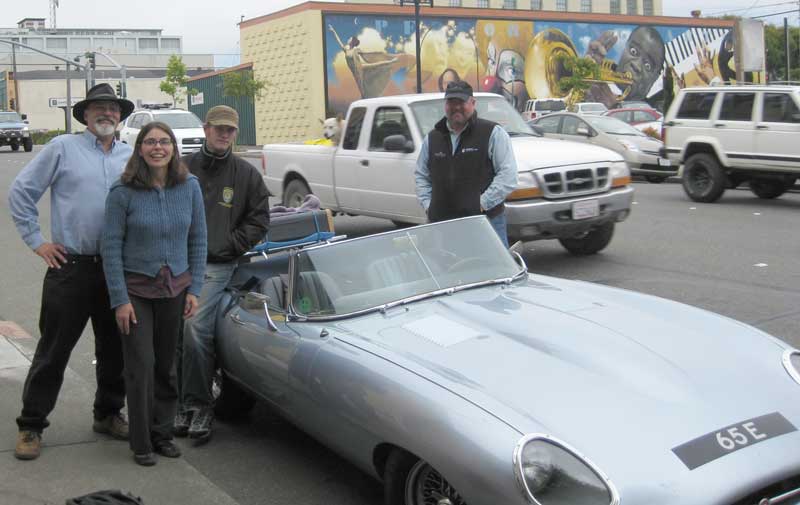 Susan joined us and we enjoyed a fantastic lunch. Afterwards a random guy on the street took this photo of us. 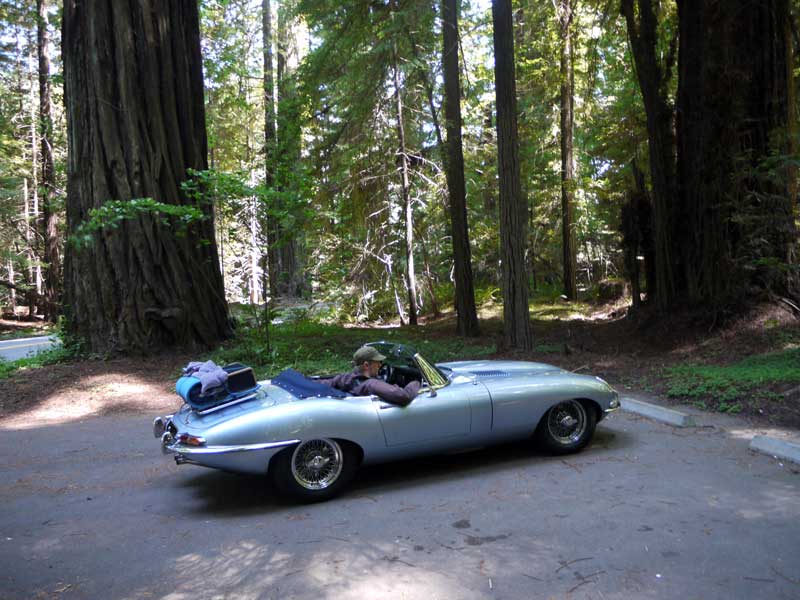 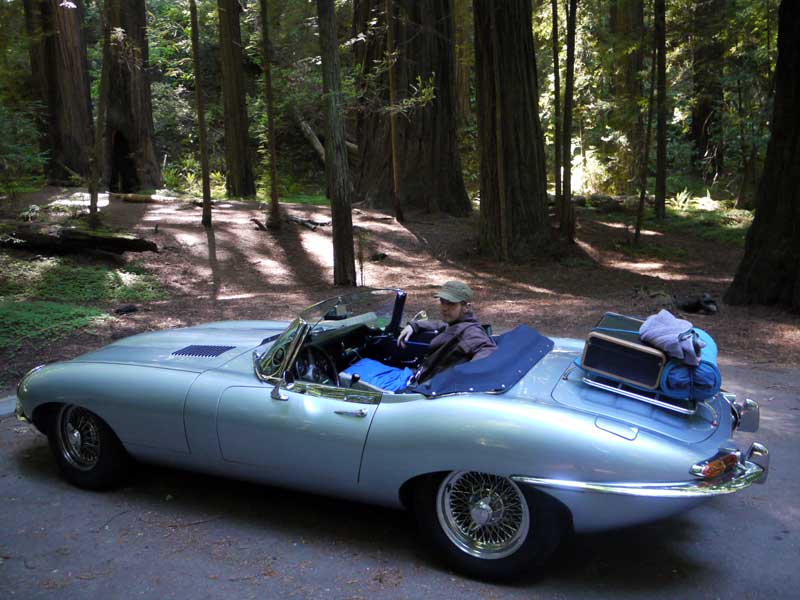 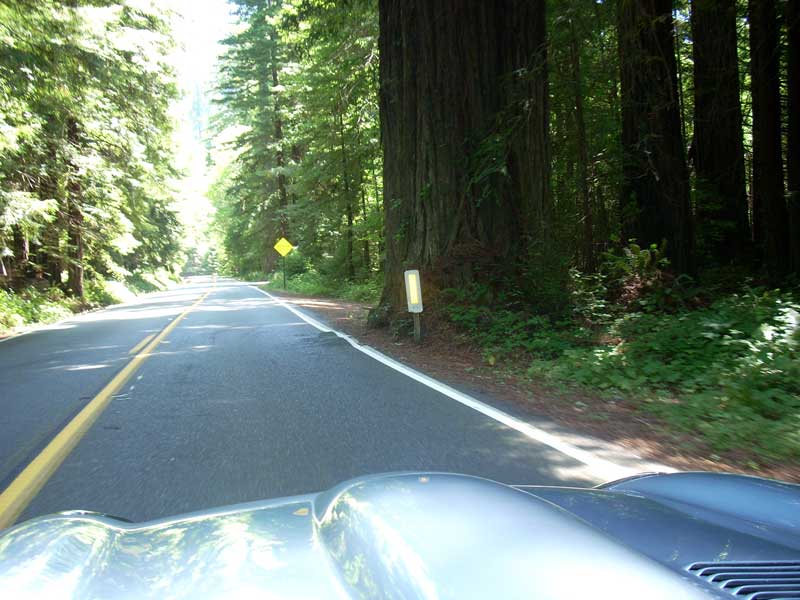 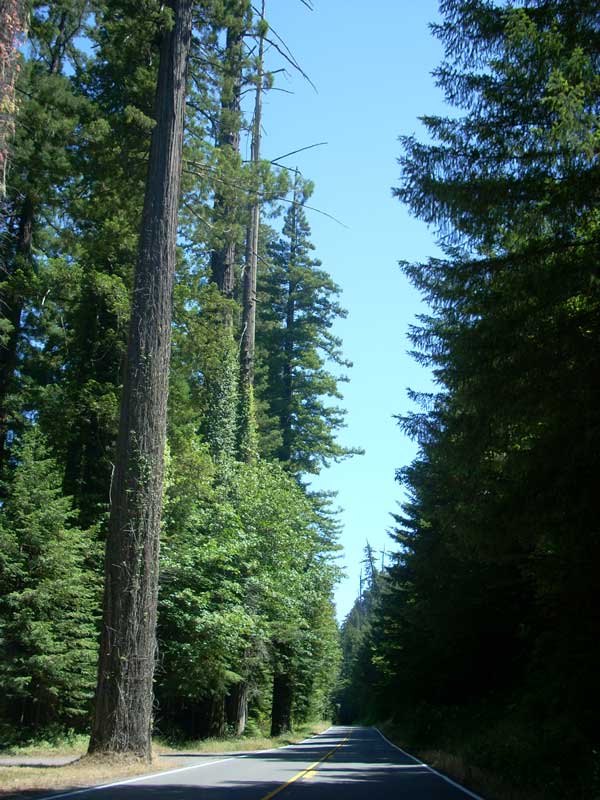 As we ascended the valley where the big trees stand, the temperatures rose. At first it was a relief from the cold and fog, but after a while it became oppressive. Chris & I, being from the Pacific Northwest are not accustomed to heat such as this. Mind you it was likely in the low-90s F, but well beyond what we can handle. It felt like we came out of the fridge, straight into an oven set on BROIL, HI. When we reached the crest and saw a sign for CA Hwy ! and Fort Bragg we chose to scurry back towards the protective cool of the fog.

What a road. Twisty, turny. Up, then down. Then up, and down again. We had the road to ourselves, which was very nice. Even Chris got into it, and he’s not usually a good passenger when hard driving is on the menu. We plunged back into the cool relief of the maritime climate. Soaked in sweat, from both the heat and the workout at the wheel we had to stop to add a few layers.

As we got halfway through Mendocino County we started looking for a place to stay the night before the sun went down. We perused a couple of campgrounds and found them both full of mosquitos. Looking at the map I noted CA Hwy 128, which traverses the Anderson Valley. I’d always wanted to drive that road and now that it was late afternoon/early evening we figured it would be cooler inland than earlier in the day. So off towards Boonville we went. The road was very nice, though we didn’t find any more campgrounds or hotels. Eventually we met up with US 101 again and rode it into Santa Rosa, and found a place to eat dinner. Chris & I talked and realized that we were close enough to the Bay Area to make it there that night, so I stepped outside the noisy eatery and made a phone call. Several friends had offered guest rooms to us in the San Francisco area and I was calling to inquire if any of them were still open. The first person I called was Jerry Mouton, since he lives in Palo Alto and being past the main metro area would make for a better start of the next day’s driving. Jerry said his guest room was ours and so I told him we’d be there in about 90 minutes. Chris & I finished our dinners and headed down 101 to Palo Alto. The Golden Gate was completely fogged in, so much that the bridge itself was invisible. I told Chris we were crossing it, but he had no way of knowing other than the red painted rails alongside in the thick, wet fog. We also encountered plenty of odd looks and “nice car”s from both pedestrians and other drivers as we traversed the streets of San Francisco.

Google Maps on my Blackberry vectored us into Chez Mouton (though we ignored it’s earlier attempt at routing of us over and back across the Bay twice, I assume to avoid those very same streets of San Francisco!) We arrived and after a brief conversation with Jerry and his wife Kate, both Chris and I collapsed into bed and passed into blissful and deep sleep. It had been a long, long day.

Cool Car Sightings of the day:
Opel GT going northbound on 101 out of Arcata, CA.
’59 Caddy Eldorado pulling a vintage camping trailer on US 101 in the Sonoma Valley.
Fiat 124 Spider spider on CA Hwy 1 in Mendocino County, honking and waving at us.