Note this is an article I’m developing for another website. Feel free to comment with suggestions, observations, or corrections.

Having lead a life of high adventure in my youth, scaling pinnacles of rocks and ice, I never imagined that I’d meet my end, flat on my back crushed beneath a falling car. My life was flashing before my eyes as I set a new land-speed record for butt-shoulder-shuffling my way out from under the creaking, swaying mass of steel in the form of a 1999 Volkswagen New Beetle suspended above my body on my tried, and until-that-moment trusted ramps and jack-stands. There I was, staring death in the face in the form of my wife’s “cute bug” looking like Damocles’ Sword, or Poe’s Pendulum, my garage floor playing the Pit. The tremor ceased as my head cleared the oil pan, and the Beetle had stopped making the horrific creaking noises as the jack-stands stopped wobbling. I cleared the bumper and leapt to my feet in a single motion, and relief swept over me like the expected post-quake tidal wave should. “Damn, I’m still alive!â€¦ in fact I’m completely unharmed!” Running into the house I yelled at the family: ‘Did you guys feel that?!” â€¦ only to be met with a non-chalant: “feel what?”

In retrospect the tremor which scared me out from under the car was only a barely-rattle-the-china 3.2 on the Richter Scale, but it drove home an indelible lesson to this DIY mechanic living in a region where three tectonic plates meet: I gotta get a lift! 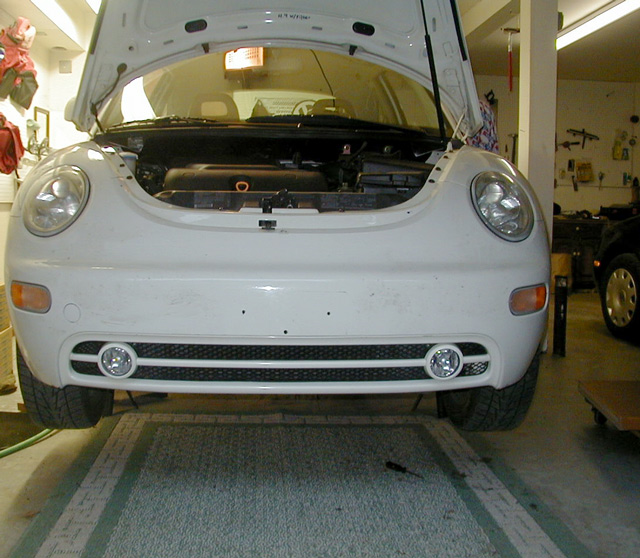 With kids heading for college in a few years, the budget was tight, but the family’s financial committee agreed that my life and future earning power were worth an investment of about a thousand bucks or so. Armed with that vote of confidence I perused the web for advice and good deals on a better platform for the home mechanic to raise his car off the ground. Most of the work I do on my family’s cars involves basic maintenance: Fluid Changes. Tire Rotations. Brake Jobs. Occasionally tasks are a tad more involved, especially with my hobby car, a vintage British sports car, which always seems to have some little thing, and occasionally a big thing wrong with it. Major engine overhauls and complete restorations however are out of my league, so in reality the lift I required could be a light-duty model. Sure, I’d love a deluxe two- or four-post lift, but at the time I was shopping I really had no place to put one, and they were all priced out of my budget. Scissor lifts however seemed to be a good compromise: small, semi-portable, usable in a small garage, and far safer than ramps & jack-stands, while being reasonably priced. 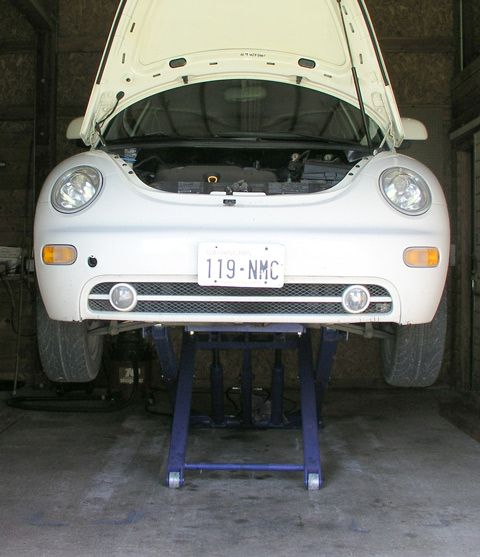 At the suggestion of more than one like-minded cheapskate wrench-turner I settled upon the “US General” 6000lb Scissor Lift from Harbor Freight. (Item #46604) It is likely the lowest-price lift on the market. Using a Triple-Word-Score combination of coupons, online specials, and shipping discounts the total price came to about $850 in 2003. I live in the boonies 60-some miles out of Seattle and due to the size and weight (~750lbs) of the lift Harbor Freight would only use a freight forwarder for shipping. This meant I had to pick it up at a loading dock in Seattle in my battered old farm pickup. It arrived in two pieces: a large wooden crate, with a cardboard box containing the hydraulic control unit strapped to the top of it, which fit right into the short bed of the old Dodge. I borrowed a neighbor’s tractor with a backhoe to unload the bulky unit from the truck’s bed and set it on the concrete floor of my garage. A few months later I relocated it to our barn, which became my workshop after the last of the domestic livestock were moved to better accommodations elsewhere. Moving the whole unit around is unwieldy, yet once upon a concrete slab it is very easy for a single person to maneuver the lift around an open space due to the magic of leverage and physics. The Control unit is essentially designed as a wheeled lever, and the lift is equipped with sturdy rollers at one end, and a lever-eye at the other end. 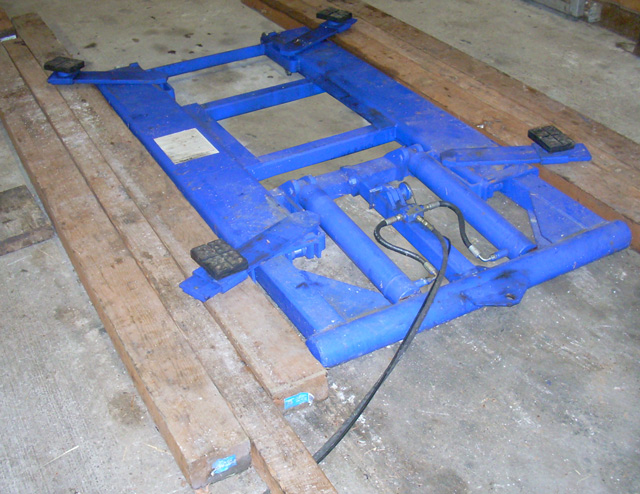 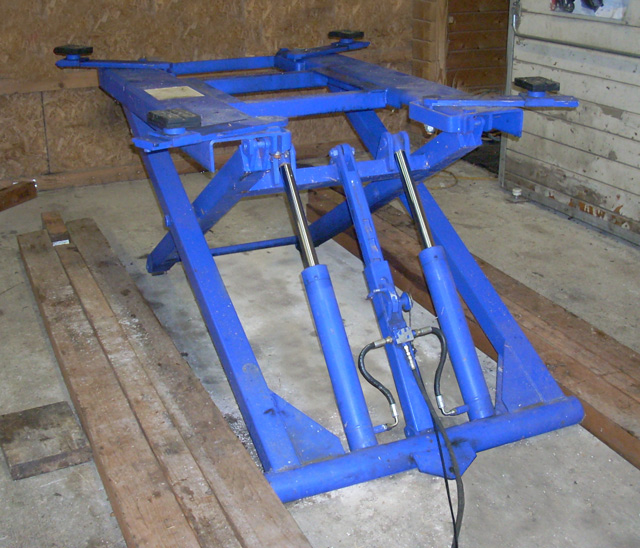 First, the bad news: Two minor parts failed almost immediately. The original plastic wheels of the control unit are just not up to the task of holding the weight of the lift when used as a lever. They literally crumbled after a few tries moving the lift around. I replaced them with sturdier units from my local hardware store with actual bearings in them. Secondly the control unit is very top-heavy and with the broken wheels it tipped over, falling right onto the fitting for the hydraulic pipe, breaking it. At first I tried calling Harbor Freight’s customer service department to have the pipe replaced. Eventually I gave up that fruitless exercise and had a new pipe fabricated at my local NAPA store. Both repairs have held up for almost six years. 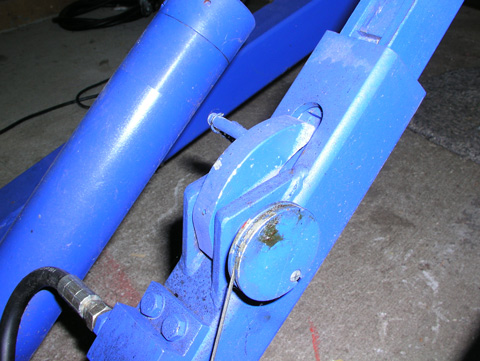 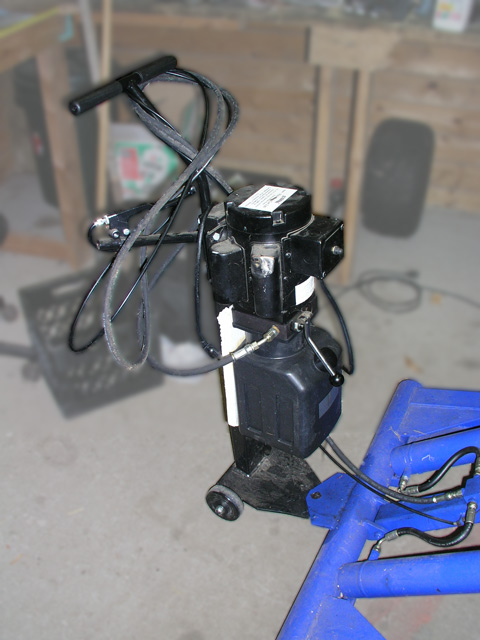 The good news: It is simple to operate, safe, and makes common automotive maintenance work a breeze. Low clearance cars such as my vintage Jaguar require help getting over the folded lift, so I have collected some long 4×4 & 4×6 lumber to arrange around the lift for that purpose. Vehicles with more ground clearance can just drive over it. Moveable arms with adjustable rubber-topped pads provide the lifting surfaces under the car. The pads are scored with right-angled grooves to mate up to the body work of cars like VW, who use flanges as lifting points. The lift has several pre-set ratcheting safety latch points as it goes up, providing safe, stable levels to perform work. To raise the car you operate the hydraulic pump, which runs from a standard household electrical outlet, with a push-button. To lower the car you must hold two levers, one retracting the safety-catch, the other slowly releasing the hydraulic fluid. 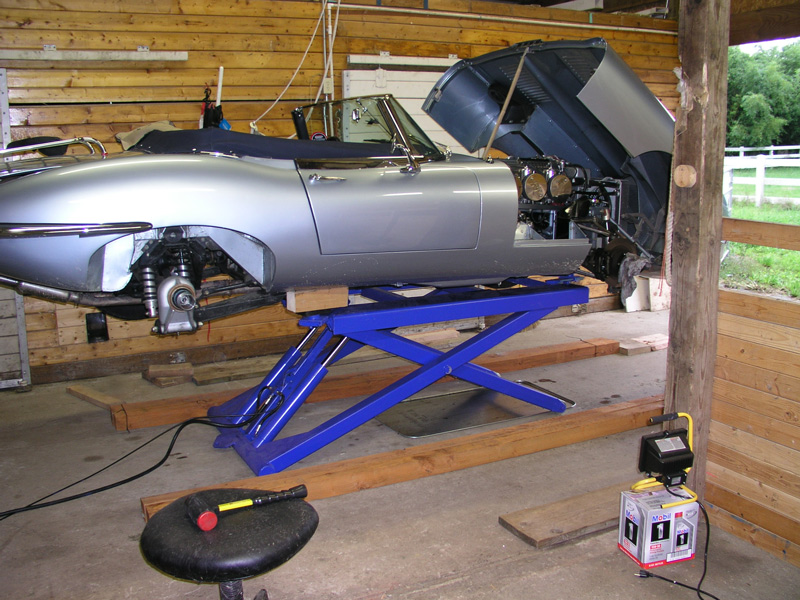 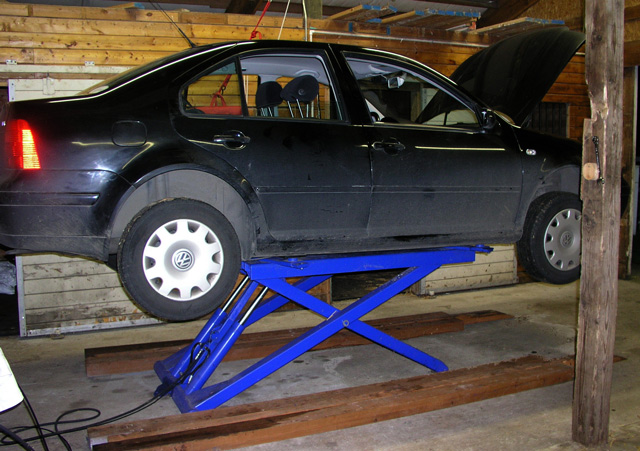 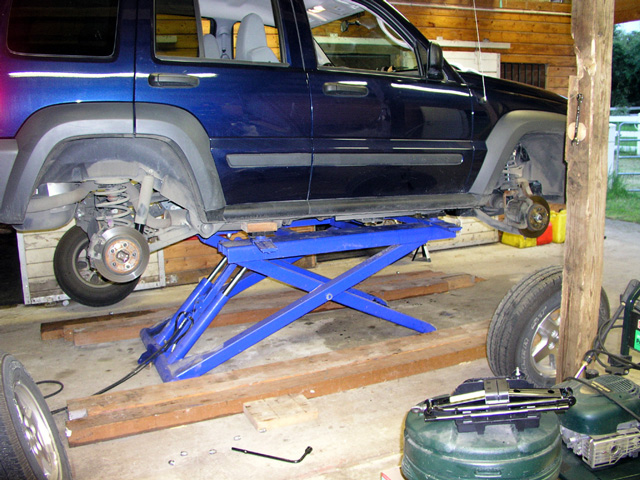 Oil changes, tire rotations, and brake work are now super-easy, and so much safer and faster when performed on the lift. Instead of spending lots of time raising, lowering and fiddling with jacks and stands, you can now get right to work. However, since the lift itself is positioned directly under the car working on things like transmissions or exhaust can be problematic depending upon the car. For these applications a traditional lift would be much better, but for the home mechanic on a budget this small lift is a wonderful luxury. I’ve used it countless times for oil and filter changes, and when it came time to sell the New Beetle I was able to do it right with numerous photos of every nook and cranny to put it on eBay Motors.

Had that tremor in 2003 bloomed into a genuine 6.0 or larger quake I might not be here today to enjoy life. Even if you don’t live in a “geological entertainment zone” like I do the peace of mind provided by such a simple and safe working platform is well worth the cost.