The last race of the season for my 24 Hours of Lemons team was at Thunderhill in Willows, California. Willows is within a reasonable driving distance from central Oregon, so Nick and I hopped into the M Roadster and made a mad dash down US 97 and I-5 long before the sun rose, with a pre-dawn breakfast stop in Klamath Falls. It was fun to actually drive there as opposed to fly and drive the tow vehicle – as well as a bonus to bring Nick along. We arrive around 10 am on test & tune day… 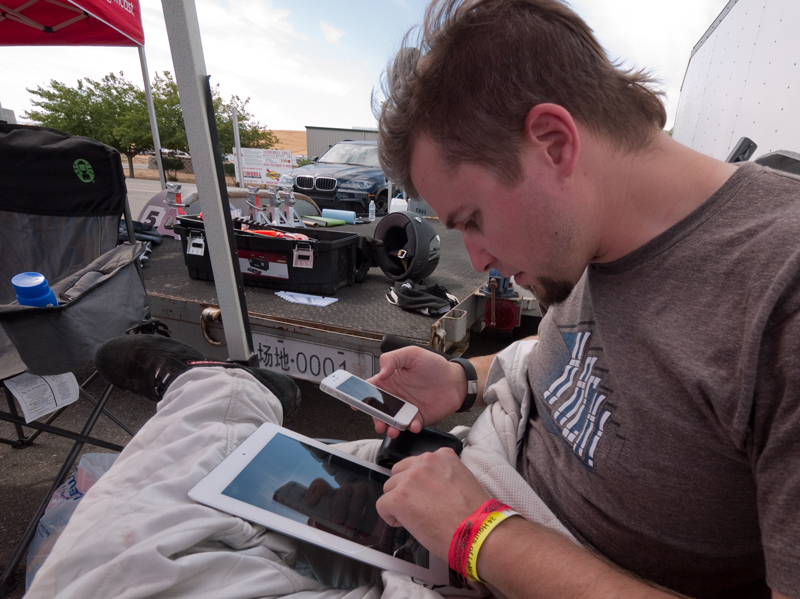 We all get a chance to test-drive the car on the track – this is my very first time at Thuderhill. This track mystifies me at first. Some of it is straight-forward, but it also has a LOT of off-camber turns, and quite a few blind hills with weird surprises. It completely baffles me, and I feel very slow. Thankfully the SCCA puts on a track orientation which I attend that evening which goes a long way towards demystifying it for me. 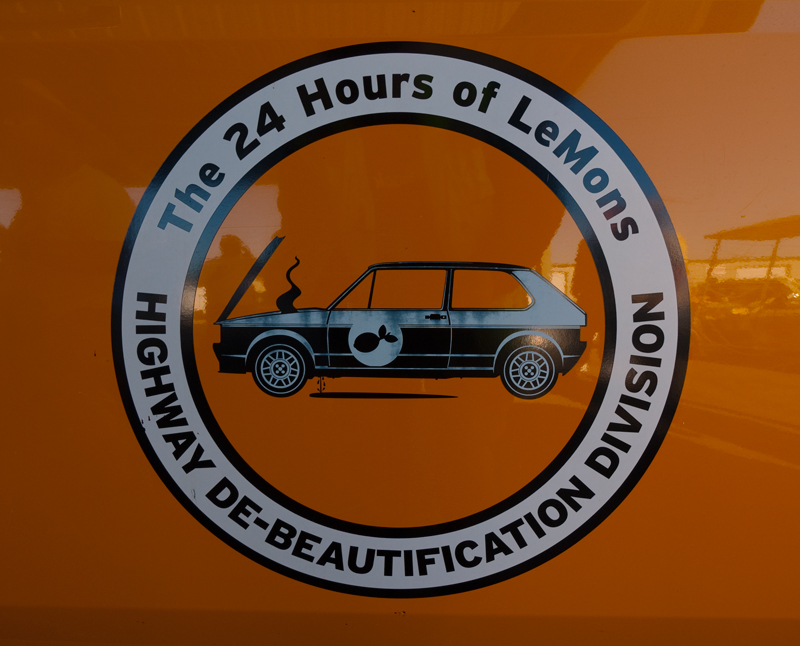 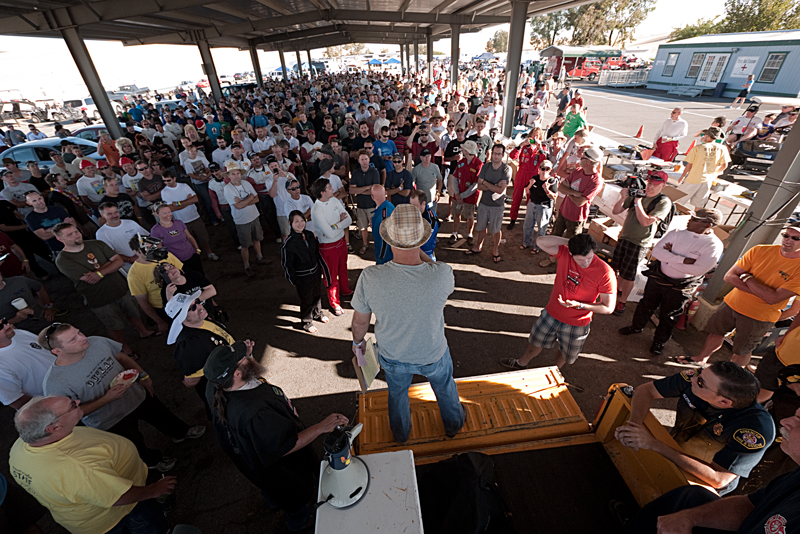 Race Day arrives and Elliott is our first driver. 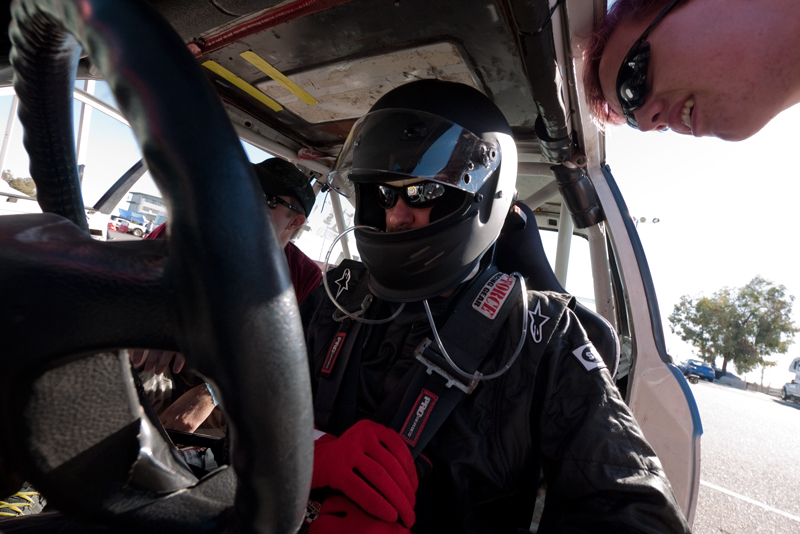 Nick & I wander up the hill to the observation tower to watch the race’s start. In traditional Lemons fashion, the cars circle under full-course Yellow while transponders are checked and broken cars (yes, they break early and often) are pulled off the track. Once it appears all the cars and their transponders are operating properly the green flag is waved at a random car at the start/finish. 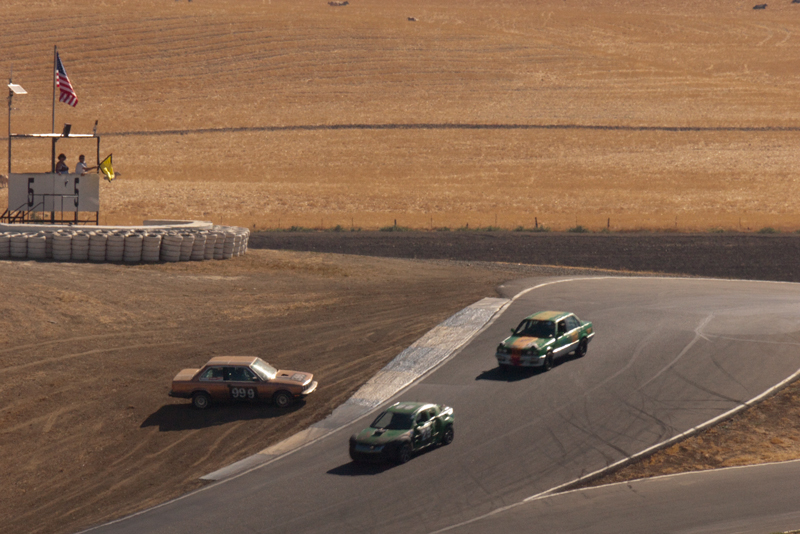 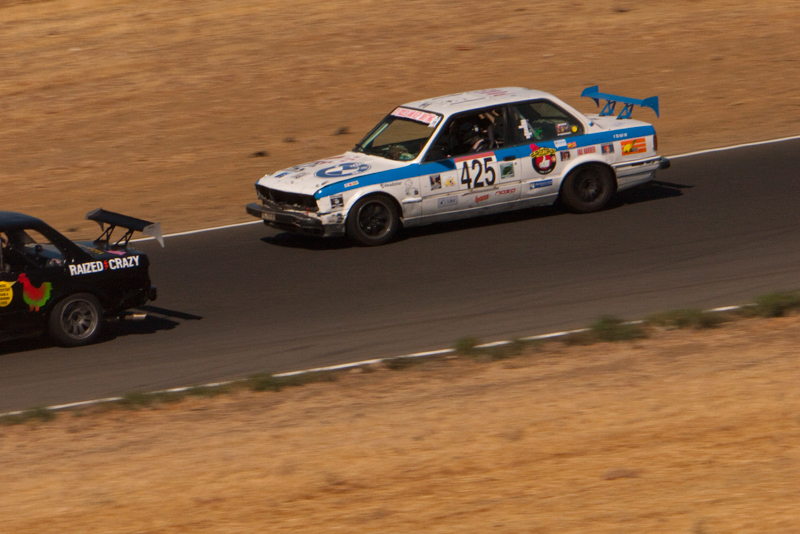 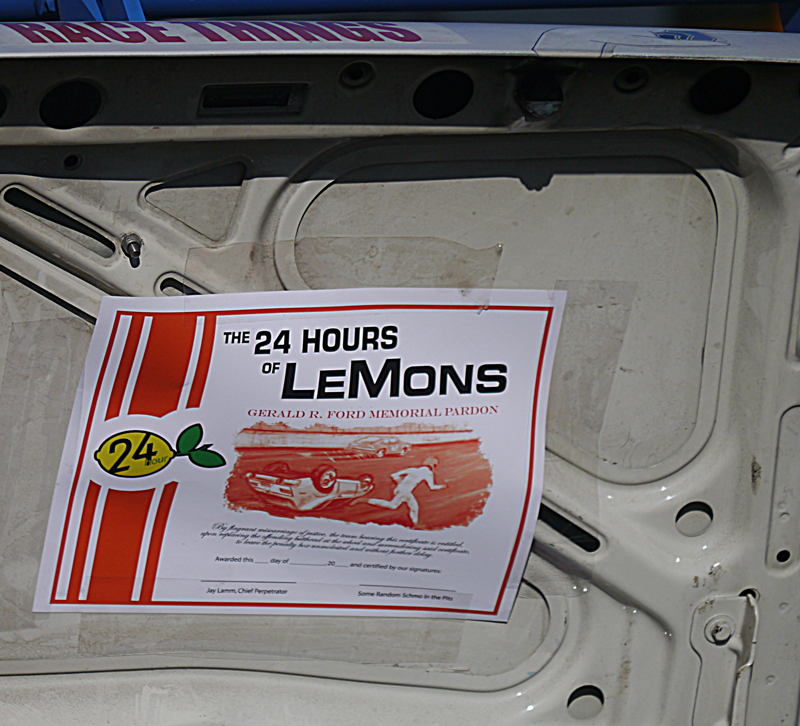 I convince my team to promise to keep our Official Pardon for some race that we have some hope of winning, either our class, or an overall victory – not that we have much of a chance of that – but it could be the difference. We’ll see.

Elliott has a fantastic first shift, and we’ve made our way to 11th place overall – until another BMW cuts Elliot off and damages our bumper. It is hanging on only on one side and is sticking up in the air, so we’re flagged into the pits in order to fix it. 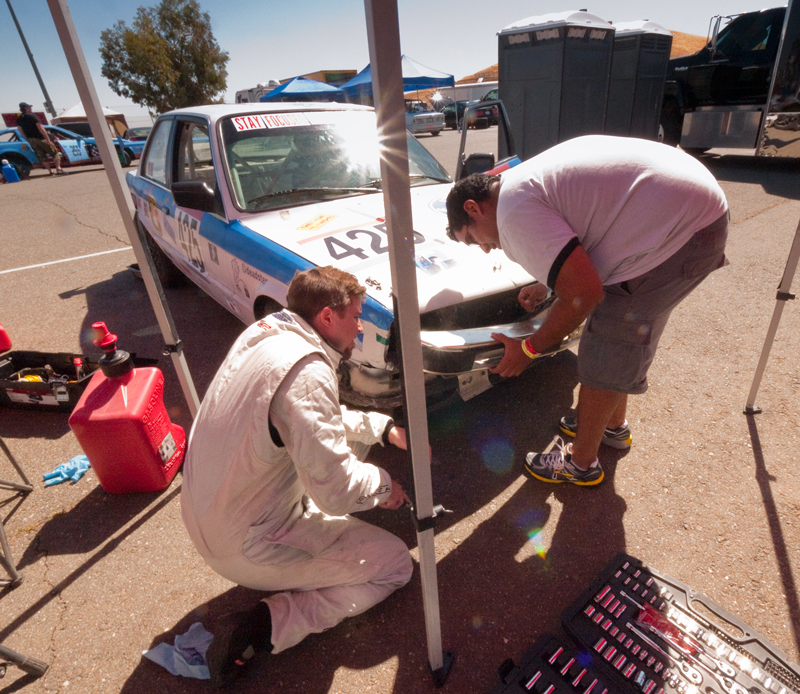 We slip to above 30th place before we get back on track.

Matt has a good shift, as do I, and then Annand, who drives the final shift of the day.

I feel like I do pretty good out there. The course taught me the best line through the weird off-camber corners and blind hills. Like my teammates, I keep us in the top 30 cars. The only issue with my shift is losing my water tube about 45 minutes in… and of course it is hot. I think I bailed out of the race about 15 minutes early due to being so thirsty. Thankfully my teammates are ready for a driver change.

We spend the evening attending to the car’s needs… 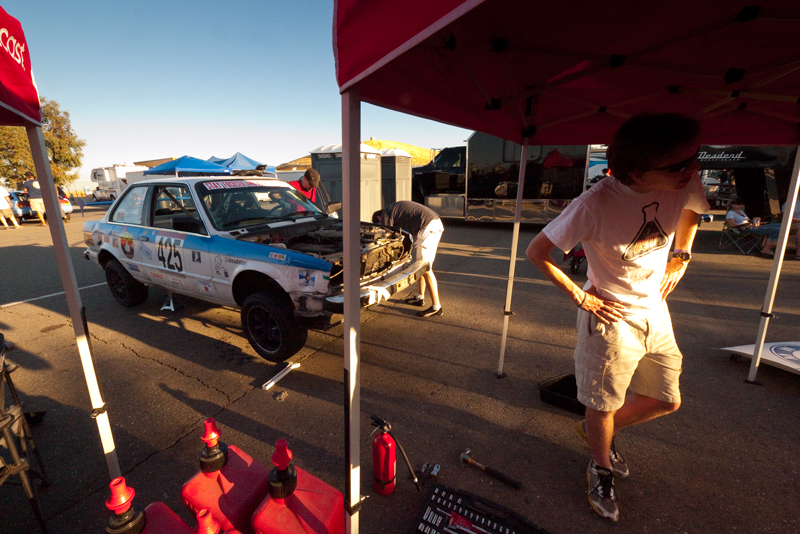 We all head out for a team dinner, and then off to our hotels for a night’s rest. 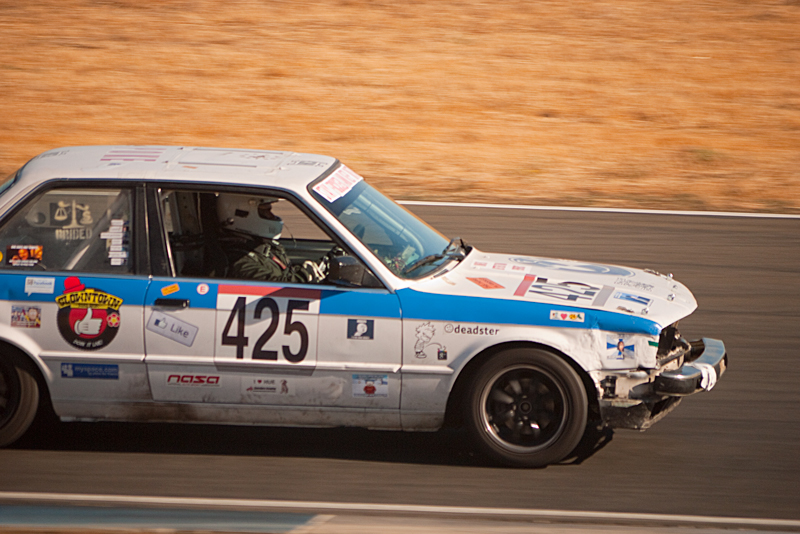 Our team stays on the top sheet of the five-sheet hourly printout pasted to the outside of the timing tower that tracks the standings. We never crack the top ten, but we’re nipping at its heels. My shift goes much better on Sunday, as I don’t lose my water sipping tube, and can stay hydrated for almost 2.5 hours. I do get a black flag though… The field had thinned a bit on the second day, and this allowed for an alternating on-track condition between open course and traffic. On one of my “traffic” laps I was stuck behind a car I knew I was faster than, but due to traffic conditions I could not get around it. On my “open course” laps I had been working on improving my speed through the more difficult corners and combinations, and as we entered the weird combination of hill crest and corners that is Turn 9 at Thunderhill I saw a chance to overtake this one car, as it overtook a few others. Just as I moved to go around him I noted him slowing down, which was odd, and as I looked up and away from this car that had consumed my thinking and concentration over the last few miles I saw the corner ahead was flying a Yellow. Dammit! Sure enough, a lap later the workers in Corner 11 had their Penalty Flag pointed at me and Board with #425 held up. I signaled my team that I had been Black Flagged, and went into the Penalty Box. Upon arrival they Judge asked me if I knew why I was there, and taking my own advice I confessed immediately, knowing exactly how I landed there, and to my surprise he sent me right back out. Upon returning to the track, I found myself right back behind the very same car I had passed under yellow! I had only lost a single lap! The only other incident on my shift was a Car-B-Q of another E30, which brought the whole course to stop under a Red Flag. I ended up near Turn 1, very close to our paddock spot, so the guys came over and chatted with me through the fence as I waited out the incident. Matt Kulka was our last driver on-course after my shift, set to finish the race. We were way out of contention, but were hoping to break into the top-twenty (we were in 22nd when I came off, down from 29th when I started) BUT… we learned a lesson about pacing ourselves. He took a turn a bit too aggressively and went all-four off, earning a Black Flag. As he came off the track the car started overheating. Sadly after a bit of troubleshooting (and familiarity with the exact symptoms from a similar circumstance with one of my cars) I noted that we’d thrown our V-belt driving our water pump. By then there were only ~15 minutes left in the race so we just started packing up the car and paddock. Oh well. But before we do however, we line up for our traditional post-race team shot, before our stricken vehicle. We take a break from packing to attend the awards ceremony – in the final results we finish in 54th place. Nick and I hop in the BMW, with Nick at the wheel, and start motoring north. This has been a great trip for he and I, as it will be our last chance to hang out together before he heads off to his freshman year at Oregon State University. He is a big help in the paddock and fun to be around all weekend long. We stop in Redding, CA for dinner at In-N-Out, the last one as you head north out of California. The next race for the Clowntown Roadshow is supposed to be at Chuckwalla in December, but sadly it falls on the same weekend as the Facebook Christmas party and my teammates decide to skip the race (I voted for the race, but lose!)

We’re deciding what races to enter for 2013, and hope to make at least one event in the Northwest. Stay tuned!