I took a trip back to 2012 yesterday morning. It was a very vivid and immediate vision because how I went there was via the resurrection of an old laptop that was last used in late summer 2012. How I got there was mundane: I had purchased a bit of older technology, an Apple Airport Express base station (I use a technology called AirPlay to direct music from my laptop/iPhone/iPad to various speaker systems all around my property, and needed another one to fill in an audio gap in the basement) but this “new” old tech which I had grabbed from eBay for literally the price of two hot cocoas from a fancy coffee shop had been reset to factory defaults and could not be managed from current software. For most folks this would be a technological Kobayashi Maru scenario. But not for me, I knew I had the ability to technologically time travel, and likely could connect to the device, manage it, apply firmware updates, etc, and get it running on my home network. My old laptop, a MacBook Pro from around 2009, was sitting in a box in my garage. A couple of days ago I brought it in the house, set it on the table, plugged it in, tapped the keyboard, and watched it come back to life.

It still had the strange screen defect that caused me to replace it in 2012. But it also came back exactly how I had last used it. Applications were still there with windows open and documents still in the state they were when I last used it in the summer of 2012. I wasn’t there to reminisce however, I was there to do a job. Sure enough the ancient version of Airport Utility recognized the Airport Express and let me configure it. Job done, I closed the laptop and went on with my day.

But yesterday morning I sat down for breakfast at the table next to that laptop and casually opened it to have a look. I opened the web browser Safari, and to my surprise I noted the RSS feed ticker in my bookmark bar updating itself. I started with digits around 30-something, but rapidly escalated to 600-something before my eyes. I had forgotten how critical RSS was to my web browsing lifestyle. It was something very close to that old “Knowledge Navigator” thing from the infamous John Sculley-era video, but FAR LESS INTRUSIVE. It was’t some over-arching in-my-face annoyingly friendly technology… it was just a tiny little robot that collected things from the Internet I liked to read and presented them in a very unobtrusive way, right in my web browser. I had my RSS feeds arranged by subjects; cars, friends, photography, ideas, Chile (from when Christopher was an exchange student there), etc.

I spent a morning I had planned to go skiing instead catching up with some “old friends” namely some websites I used to visit almost daily, and writers I like to read. I found out that Tomas Dinges had taken a voyage and was back in Chile, that Wayne Bernhardsen’s Malamute Malbec is still alive, though now old and slow, and the stuff at Curbside Classics is still great. 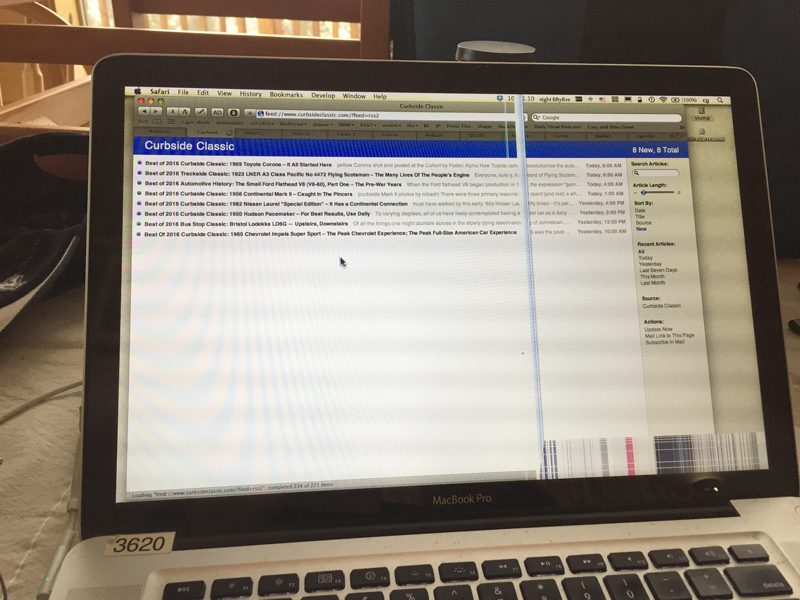 I eventually closed the lid after I had browsed through the entirety of my unread RSS feeds, and took off for Mt. Bachelor. As I was resting between runs on the Northwest Express Lift I thought about how Facebook had largely replaced RSS, but what had won out wasn’t quality, it was quantity. Instead of a trickle of great content it was a torrent of crap. Instead of thoughtful analysis of an old car parked on a roadside in Eugene, it was several hundred bad-quality “potato” shots of cars in V.I.S.I.T. Time is the most valuable commodity we have, and I’m starting to ponder how well I’ve been spending it…

I have no idea why Apple pulled RSS support out of Safari (ironically around the same time Google killed its RSS Reader) but it is certainly a feature I miss. Yes, I tried a dozen stand-alone RSS apps, but none of them were very good, and none of them made good browsers. Since that moment in time when that old laptop was retired my web browser has morphed from my window into the Internet, to a Facebook screen and where I pay my bills. I’m going to try to change that habit in the new year. Seek out quality content again.

Feel free to share how you find it in the comments.

One thought on “A trip back in time… and missing RSS.”