(note: this post is backdated a bit over a week)

I’m in Colorado on vacation (and marooned in 1990’s technology… using dial-up for the first time in this millennium!) visiting my parents. Took the day off from sliding down hills on sticks to drive down to the flatlands northeast of Denver to finally meet the man who has saved my ass more times than I can count. You see I am a mechanical midget whose greatest skill with a wrench is making musical tones by dropping them on the garage floor, which I have to admit I do quite well. Making wrenches do what they are supposed to do? Well I haven’t quite mastered that yet.

However, with access to smarter people than me, via the Internet (specifically the Jag-Lovers E-type mailing list), I manage to keep my old car running. One of those smarter people is Paul Wigton. I set aside a day of my vacation to meet this man who has offered, free of charge and with endless humor and patience, infinite amounts of advice and counselling concerning the collection of parts and British engineering that I am the caretaker for, the 65E. Paul has been working with, and lived around Jaguars literally since BIRTH, and has forgotten more than I’ll ever know about these cars. He’s also a genuinely nice guy. Like me, he is the caretaker of an E-type that belonged to his parents. In his case the (in)famous “Tweety”… named for an odd noise it makes. I was finally able to hear it first hand, as well as shake the hand that hit the starter button. 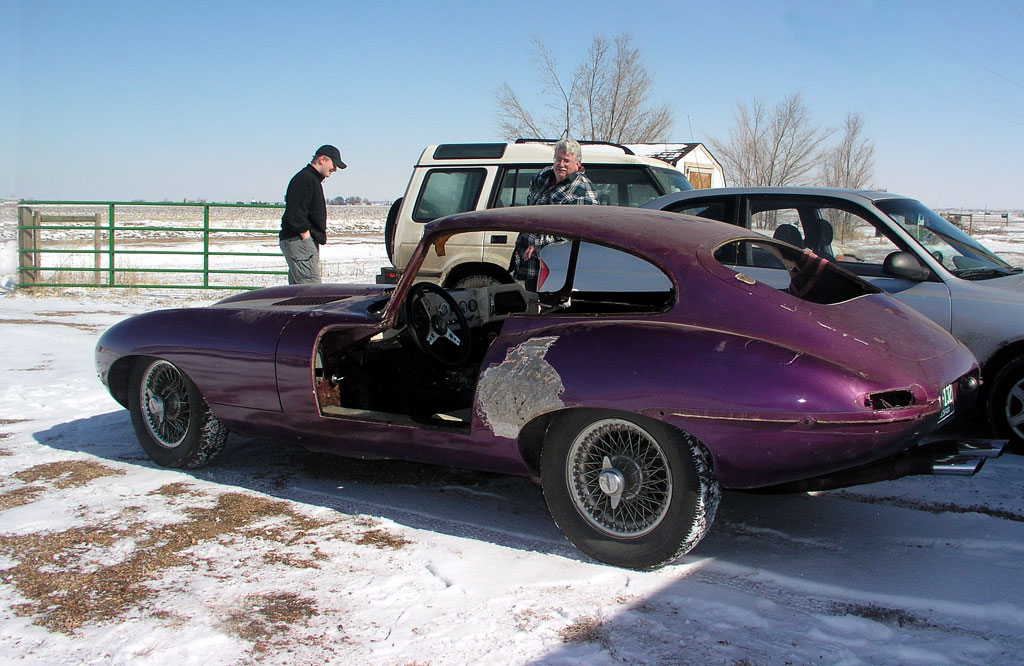 Above: Click the image and you’ll get a short QuickTime movie of Paul starting up Tweety (and Christopher running away?!) This was taken with my digital camera, not a true video cam, so the quality is not great, BUT you can clearly hear the famous “Tweet” note to the exhaust. Paul says the noise orginates in the head, as his dad removed the exhaust (LOUD!) and it continued tweeting.

Paul gets a lot of crap for having a purple E-type. But now having seen it, the color has actually grown on me. His mom chose the color apparently, and topped it off with a white tuck&roll and purple shag carpet interior (which I’ll … ahem… reserve comment on). The exterior though is interesting. The color has depth and behaves a lot like my OSB car… highlighting the curves and reflecting the colors around it. I’d love to see it: 1. Complete and clean, and 2. Under varying light conditions (sunset, dusk, stormy weather, etc) as I imagine it would really photograph well. As it was, I was under harsh, BRIGHT sunlight on one of those high-plains winter, high-pressure days. Even so, it looked good. So my vote to Paul is: Keep the “Poiple” when it comes time to finish the job. 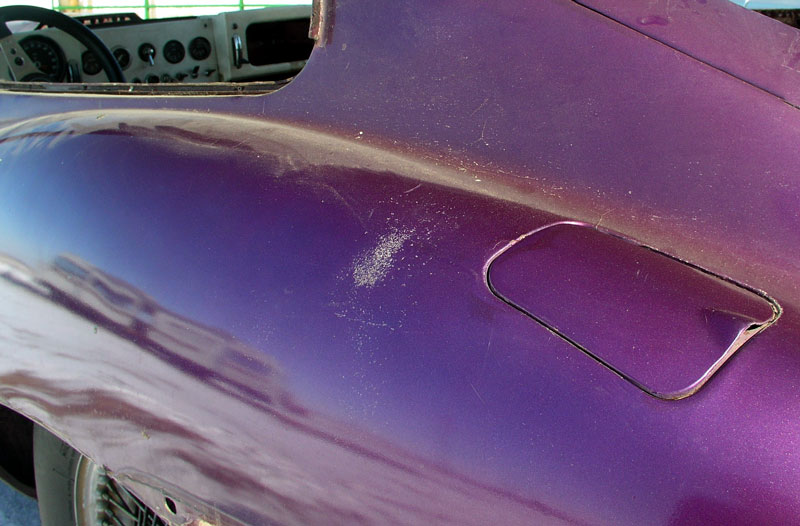 Above: Yep, it IS Purple. It is dusty and scratched, but under there is a nice color in an odd sort of way. 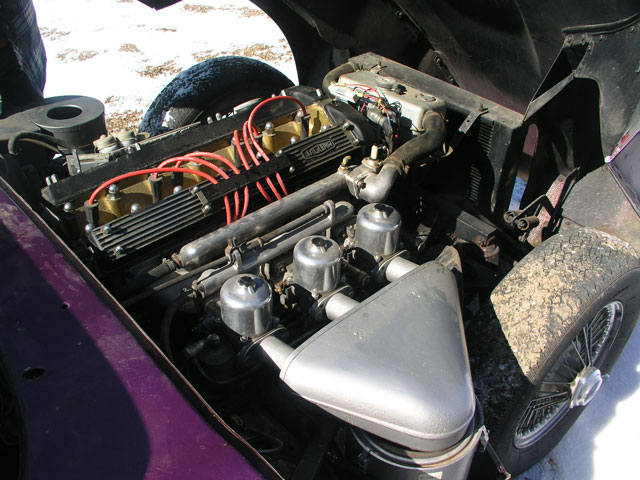 The car has its original 3.8 engine, with close to 200k on it. Purists will cringe at the Series II cam covers, but hey, whatever works… besides the car is PURPLE! Paul says the ribbed cam covers don’t crack as easy, which I can understand. I like my shiny aluminum ones, but they are a royal pain to keep looking good, that is for sure.

Did I mention it was freezing cold? It was barely above 0Â° on the Fahrenheit scale, and yet… 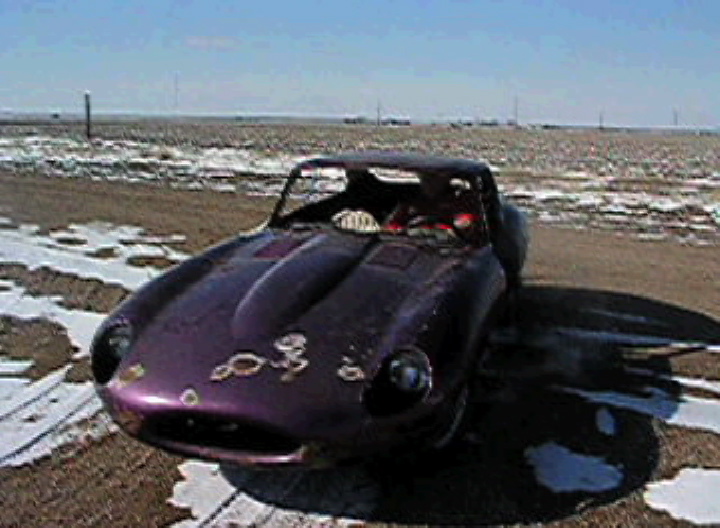 Above: Click the image and watch as Wiggy & Tweety zoom off into the … um… gravel road. Note that I was expecting Paul to just back the car into the garage, as he had removed his jacket for some odd reason. Instead he blasts down the road at a full clip, minus a coat, a door, and a windscreen! As you will see snow covered tires don’t grip a cold garage floor very well, as Wiggy had a real hard time getting the car into the right spot on the garage… too much torque! Stay tuned to the end where the affect of all that cold is revealed.

We went inside and spent the next couple of hours warming up with hot cocoa and pleasant conversation. Paul filled me in on the history of his parents’ other famous Jag, the factory works lightweight XK 120, aka the ‘LT2’ or ‘Silverstone.’ The Wigton’s were the last owners until the current one bought it in the 70’s and restored it to factory-new condition. It appeared at the Monterey Historics in 2005 and Paul made a pilgrimage to see it. Here are two old photos of the car on Paul’s wall (in a poor Photoshop montage from two photos I snapped). The one on the left is Stirling Moss autographing the car as his parents look on, and the one on the right is Paul’s mother at the wheel of the LT2. 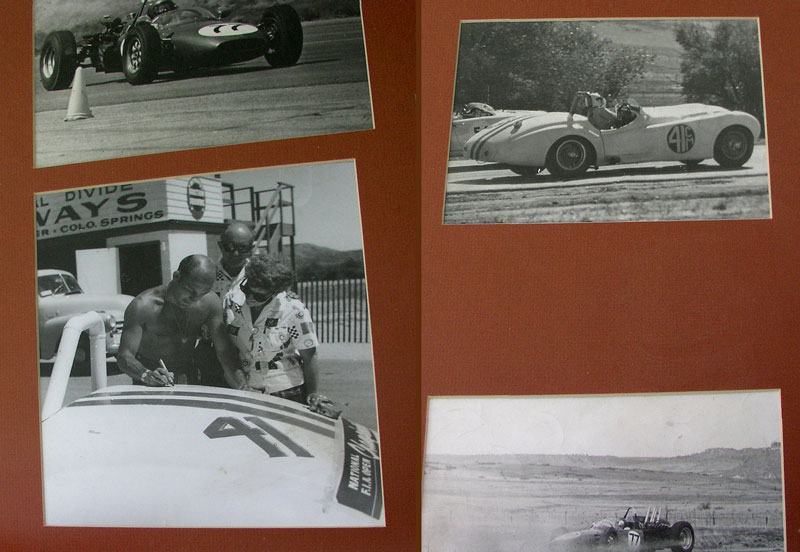 Big thanks to Wiggy for the hospitality! Big thanks also for keeping my usually morose teenager laughing so hard he almost wet his pants. It was a wonderful, Wiggalicious Day.