I’ve known a few Finns. They are a weird bunch. If you need any proof of that, just watch this video. The spectators are as nutty as the drivers!

Those with weak constitutions or those unable to stomach the occasional vintage sedan being brutalized by trees, ditches, and/or telephone poles should not watch.

I’m not a grammar nazi. I don’t correct people in mid-sentence. I don’t flame people online who make language missteps. I can’t even profess to being mostly correct in my writing as lord knows I abuse it constantly with ellipses and parenthetical statements (as I’ll soon demonstrate … d’oh!) I’m sure all my English teachers would tell you I was nowhere near the top of their class when it came to grammar. Sometimes though I see things that make me cringe.

I have pre-built RSS searches that scour Craigslist’s “Free Stuff” section for things I use to make BioDiesel. One of those searches is the word “barrel”. When I was setting up my system I needed barrels and why pay for one when somebody is always giving it away somewhere? I no longer need barrels (in fact I should give a few away!) but occasionally people give away a barrel full of stuff (waste oil, veggie oil, methanol, Diesel, etc) that I can use, so I leave the search there in my preferred RSS reader, Safari.

I swear, at least once or twice a month, this one comes up… 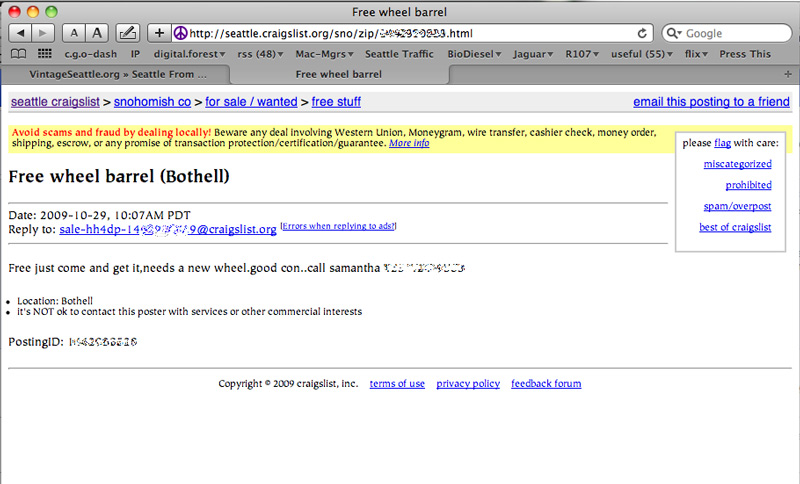 It is not always this person Samantha giving it away. I’m sure she is not an idiot, and in fact could very well be a very nice person. Most people I’ve met named Samantha have been nice. I even dated a wonderful woman named Samantha when I was in college. But … THE WORD IS WHEELBARROW DAMMIT! Wheelbarrow. Look it up! 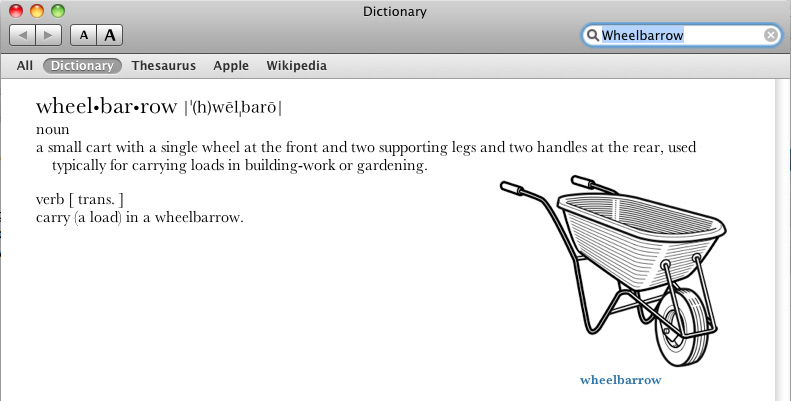 ah… there … I feel so much better now.

Oddly my first thought upon watching this is: Who wants to meet me down at Ivar’s for some clams?

My second thought is: Let’s see the simulation of the proposed tunnel filling up with seawater during a similar event.

(hat tip to my neighbor Bill Gilliam for the link) 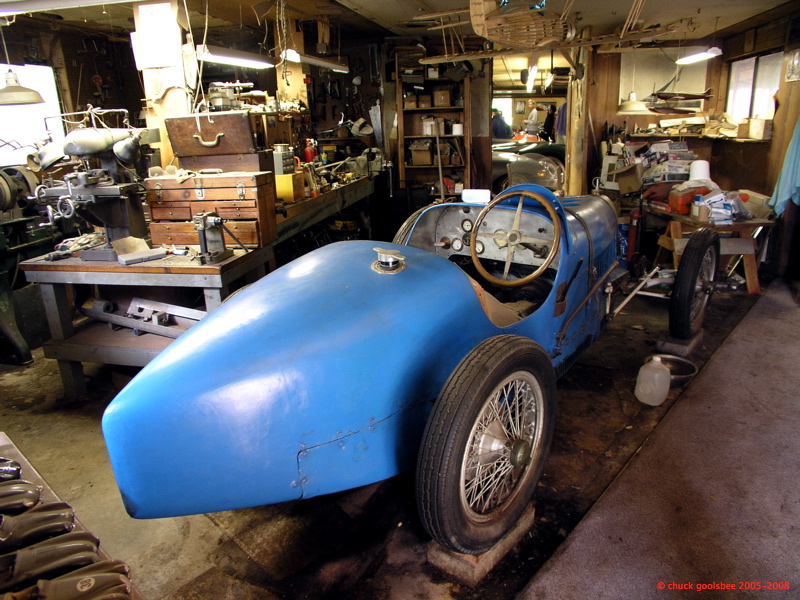 This photo was taken in 2008 at the Classic Motorcar Rally. We had a rest stop at the home, and collection, of a rather… shall we say eccentric… car lover. Living on Marrowstone Island, at the north end of Puget Sound, this gentleman has literally built his house around his car collection, the centerpiece of which is this Bugatti. Bit Bucket – One small correction guys, our Washington is on….

This from my friend Tom Bridge, who lives in Washington DC and is interviewed in this clip on a Canadian news show. After it aired he noted their geographic blunder. I actually live in Arlington, Washington, which is a tiny town in northwest Snohomish county with about 10,000 people. Arlington, Virginia on the other hand is a rather large city adjacent to Washington, DC that has a population of nearly a quarter-million. They are also about 3,000 miles apart. Usually when I tell people I’m from Washington I have to qualify it by either saying “Washington state” or “the OTHER Washington.” So it is odd to see the outline of my state being used to illustrate the place most people think of when they hear “Washington.”

Finally, it is a common Canadian theme to make fun of Americans, especially concerning their lack of knowledge about the rest of the world, and in particular things about Canada. I live within a slap-shot of the Canadian border and watch Canadian TV and listen to Canadian radio. While I consider myself particularly knowledgeable about geography (I always score above 85%, and usually higher, on this test for example), I don’t expect the average “man on the street” to know where Flin Flon** is… but I sure as hell expect a major new outlet to not make a blunder like this.

You can watch the video (and hear Tom’s report) here.

END_OF_DOCUMENT_TOKEN_TO_BE_REPLACED 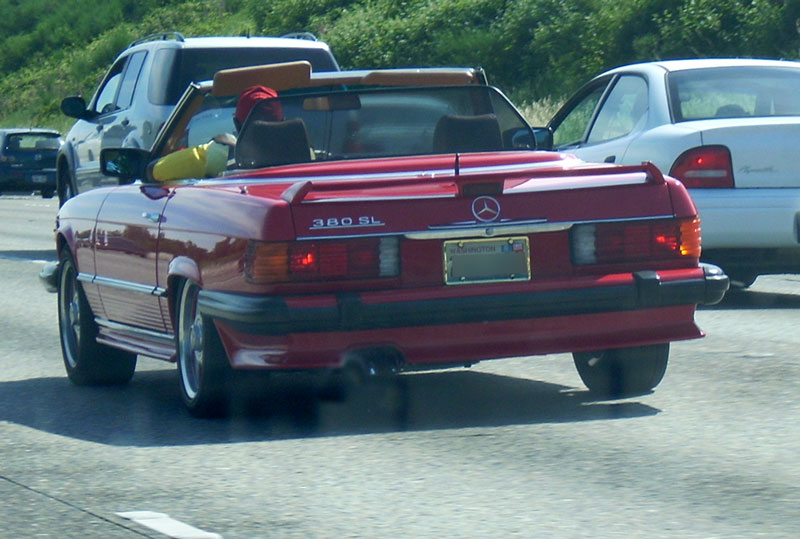 On the one had I admire those that modify their cars’ appearance in order to make it their own. On the other hand I feel that 97 times out of 100 they fail at making any improvement over how it came from the factory. That ninety-seven percent makes up about ninety percent of what usually what ends up here in the “Weird Seen” category here on chuck.goolsbee.org.

I spend an inordinate amount of my life slowly creeping in first gear with no throttle pressure up and down Interstate 5 in the Seattle area. One of the great benefits of driving a Diesel-powered car is the amazing torque available, even at idle. I like to plant myself in a lane behind a big truck, because they pretty much do the same thing: Put it into a granny gear and let the idling engine just slowly pull the rig along at a steady rate while the idiots burning gasoline lurch on and off their pedals. Me? I have both of my feet on the floor and rarely engage the clutch or throttle. (Yes, I know that technically the Diesel engine has no throttle, but I can’t bring myself to call it a “gas pedal” either!) The truck and I roll along, with its bulk running interference for me. Yes, idiot drivers will weave in front of him but truckers are smart enough to not get lulled into the trap of driving faster until the entire body of traffic is also going faster. That gap that opens in front of us does NOTHING to keep us from getting where we are going later than anyone else on the freeway… trust me, I se the same cars at the end of my journey as I see at the beginning. They key is once the stop-and-go is done, get out from behind the big rig and flow along with everyone else.

One benefit of this style of locomotion in heavy traffic is car spotting. I see interesting cars and photograph them. I keep a tiny little $80 Nikon Coolpix L11 digicam in the armrest cubby of my Jetta and can snap off a shot of an interesting car in two seconds or less. The cars I choose to shoot have to be unusual in some way, such as the 380sl seen above.

The Mercedes-Benz 380sl was sold from 1980 through 1985 here in the US. Based on the immensely popular R107 chassis which was a perennial best seller from the early 1970 until the last one rolled out of Stuttgart in 1989. When I was a kid it seemed every Doctor, Dentist, Lawyer, and Architect drove one. In a lot of ways this car lead to the downfall of General Motors because a decade before those very same guys were driving Cadillacs and Buicks. GM’s answer to the challenges brought forth by the 1970s and 80s were colossal blunders such as the Cimarron, Seville, and Reatta. Mercedes-Benz cars of that era however, such as the W107, or the W123 & W124 were the antithesis of what GM built: They were solid as Panzers, and so reliable that I’d say that most of them are still running today. How many early 80s Cadillacs do you see on your daily commute? The Mercedes styling of the era, while being Teutonically dull, has a certain timelessness to it so that even today they don’t look unusual on the road. The same could not be said of the Seville of the same era.

This 380sl was very clean, with excellent paint. The modifications by the owner were the rear spoiler and body kit you can see and a front spoiler you can’t, plus red painted interior wheel spokes and grille (sorry, no photo of the cars’ front) so it wasn’t over-the-top “blingy” but it certainly was not stock. Unlike a stock version it stood out and was very visible. If it were my car, I doubt I’d even think of doing this sort of thing. Though I will admit to painting the VW symbol on the front of my 1980 Rabbit body-color, as I felt the chrome was strange. And now that I mention that, I did replace the chrome VW symbols on our 1999 New Beetle to the European blue ones. Both of those mods were very subtle and likely would not have even been spotted by a casual observer. As a rule though I prefer cars to remain original, as the designer intended. The market seems to agree with that, as modified cars tend to lose value compared to stock. The ultimate of course is “original”. As a car ages the more original the better, since as time goes by ultimate originality becomes harder and harder to find.

In a way examples such as this make unmodified examples increase in value. But since nearly a quarter-million R107s were built this guy hasn’t made that much impact in the overall market. 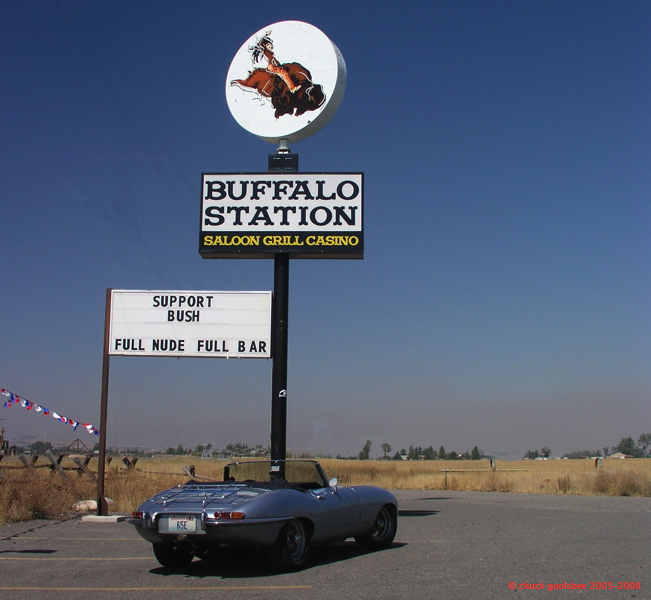 I’m recovering from a Le Mans induced sleep pattern alteration, so I’m a tad useless today. Hopefully I’ll get back in the swing of things soon. Meanwhile here is an unusual sign of the times, circa 2006.