Here are some recent samples… snippets really, of my time-lapse noodling. Most are shots from my house, looking in some western direction, observing weather, sun rises and sets, some astronomical movement, and even some local fauna. One of these days I’ll have the bandwidth to edit these into something real. Until then, enjoy a slice of life in Central Oregon!

Be sure to click the “HD” option if available, and go full-screen.

I’m serving these off of Facebook rather than YouTube to spare you the ads. Please let me know if you have any issues viewing them.

Hoping the embed code works. If you can, view it full-screen and HD to get the whacky atmospheric effects from the long (~600mm) lens.

I shot this time lapse this morning out my living room window. I was able to predict the moonset path with an iPhone app, and then set up the tripod, camera, and intervalometer. After the moon set I did some low-tech panning and zooming…. yeah, not super-smooth, sorry.

I hope you enjoy it.

One of the fears people have about taking an old car out on an extended trip or tour is “what happens if it breaks?” This subject came up a few times on our little Southwest Oil Leak email list, and the consensus came down to: “We’ll all pitch in and help fix it.” Darrell Grimes driving an XJ, volunteered to be “the sag wagon” and generally stayed at the back of the pack. His trunk was filled with tools and supplies. The tour was filled with people who had lots of experience working on these cars, a few of them professionally. Having performed my share of roadside surgery over the years I know I’m pretty confident that I could get my car running again in just about any scenario short of a con rod exiting the XK horizontally. Ironically, short of the Bedell’s failed voltage regulator at the start of the tour, the cars had run great – until yesterday, when Jerry Mouton’s generator failed. He drove on his battery all day and planned to swap it with one he’d been carrying in his boot for twenty years in the morning. 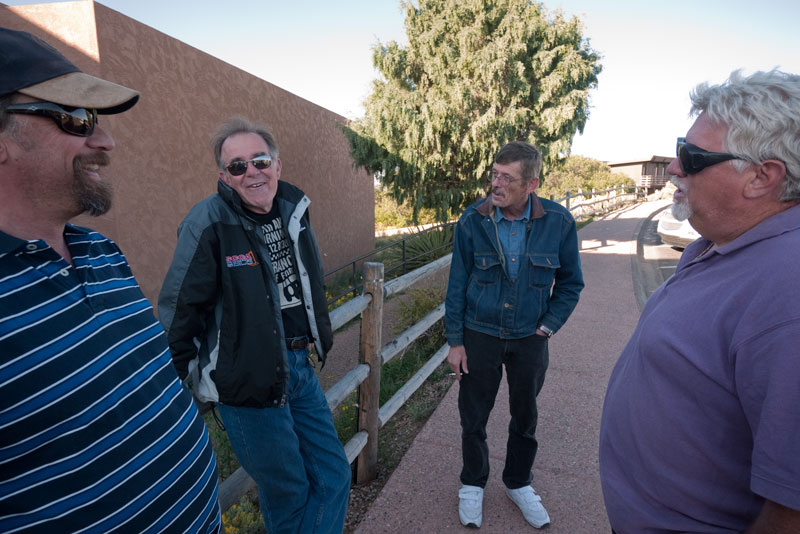 The hotel restaurant was closed for breakfast so we gave up on food and decided to fix Jerry’s generator. As was prearranged, we had more mechanics that the job really required! 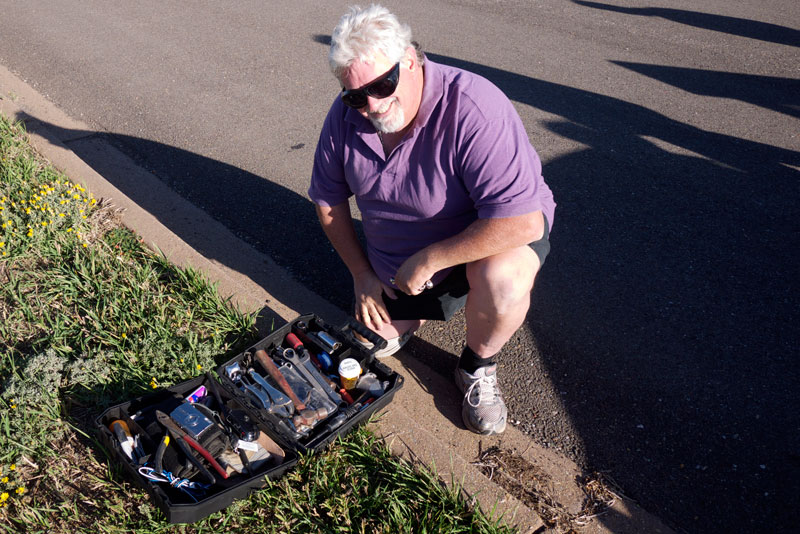 My car is the 715th E-type that was built after the change from a generator to an alternator. My struggles with alternators are well-known, having gone through many Lucas and Hitachi units over the years. Jerry’s car is a year older than mine, and it was interesting to note the differences, especially regarding the placement of the electrical drive component: in the early cars it sits down inside the frame rail, rather than above it like my alternator does. 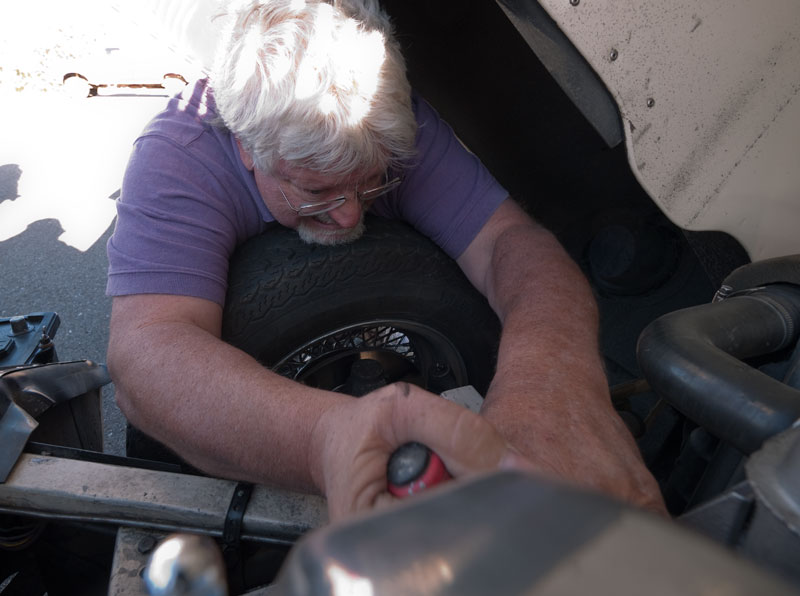 This made removing the generator more time-consuming than originally thought by this group of esteemed mechanics. The “twenty minute job” stretched closer to one hundred and twenty minutes when all was said and done. 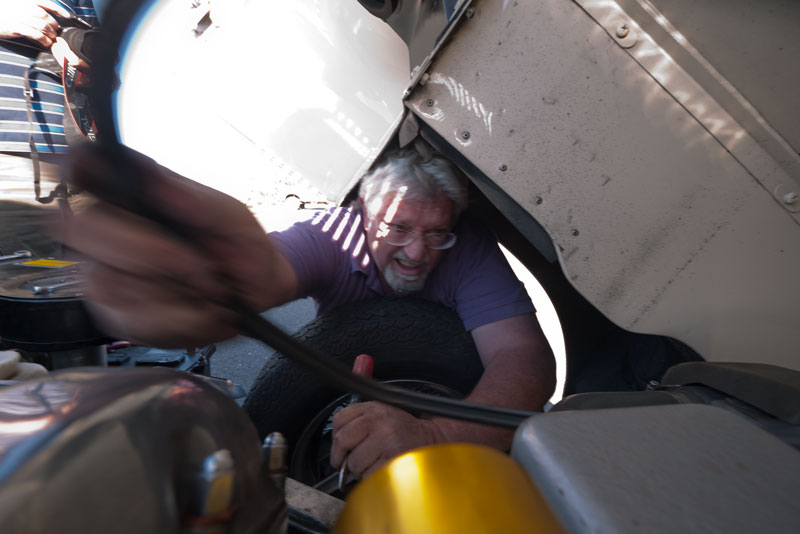 I didn’t participate much, beyond shooting photographs and making jokes. So when things got tough I wandered off and admired other cars… 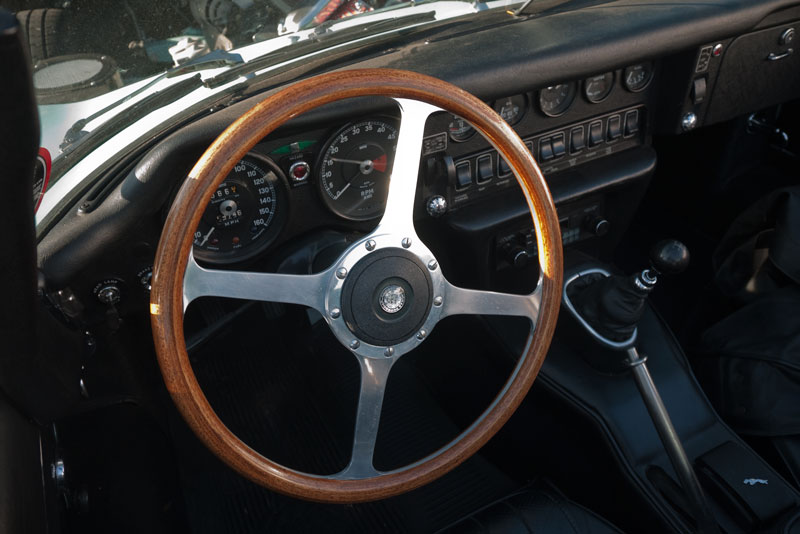 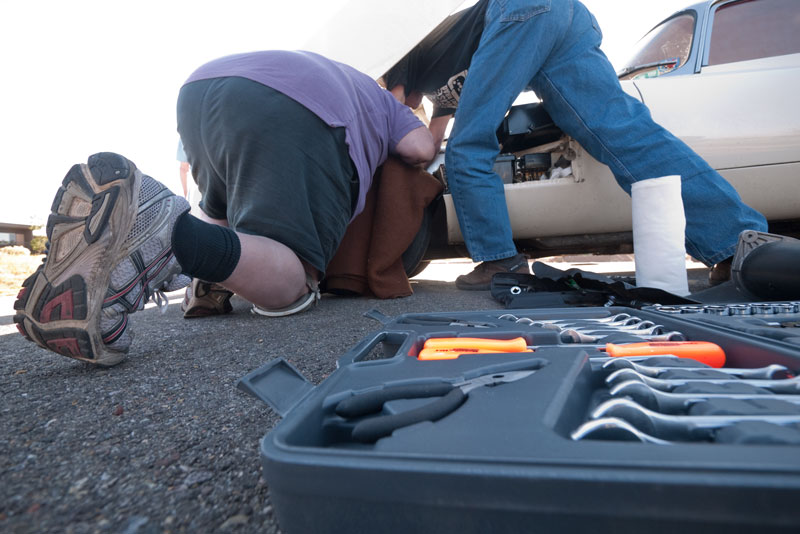 The belt that came off Jerry’s generator seemed to be made of the same low-quality crap that lead me to give up on the double/grooved belt for early E-types and go with a single AC belt for some Ford product. I went through a half-dozen of these bad belts before I switched and have yet to change my single skinny belt. 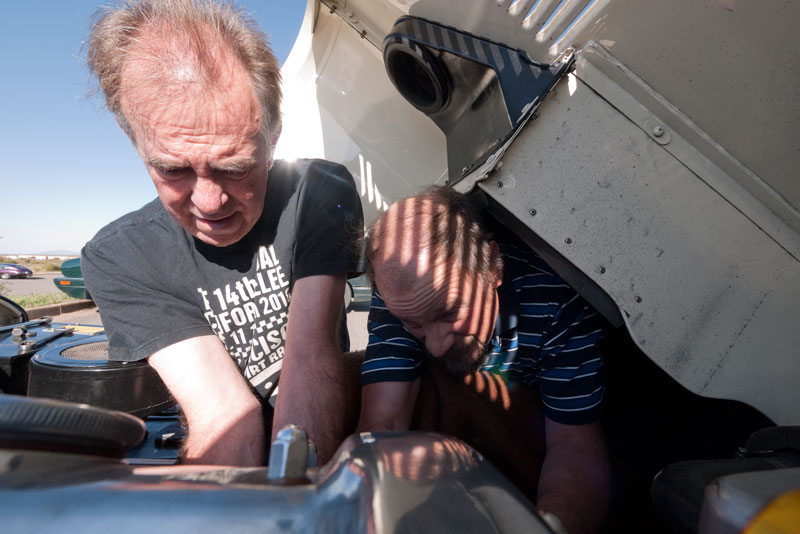 Once the old generator was out, and the pulley swapped it all went back in a whole lot faster. We walked to the cafeteria near the visitor center and grabbed a meal (it was now “lunch” rather then breakfast time) before we hopped in our cars to tour Mesa Verde. This was my first visit to Mesa Verde, despite coming close many times over the years. For some reason I thought it was just a single, large cliff-dwelling, but instead it is a rather large, sprawling, complex of them. I’ve visited some of the remote cliff dwellings in the Gila Wilderness, but until now have not seen the many sites at Mesa Verde. It is a truly impressive place, and I highly suggest a visit if you haven’t been there. 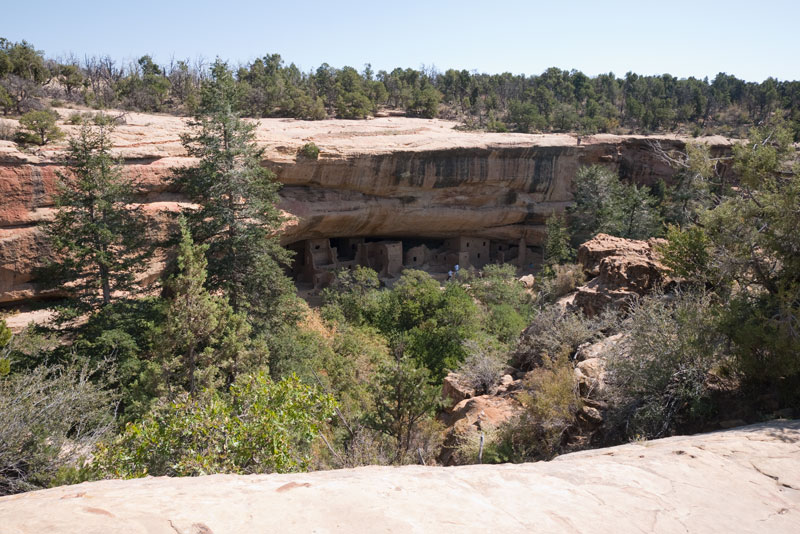 We started with Spruce Tree House, which is a mid-sized cliff dwelling that is a short hike down a canyon. It is fascinating to see these dwellings. How well they are constructed, and then realize the relatively short period of time that they served their primary purpose. Half of the park was closed, but we drove around and walked to all of the important sites that were accessible. Much to my surprise there were signs of structures not only in the cliffs, but also along the ridge tops. Some were clearly dwellings, but also there are storehouses and reservoirs. There are also some structures that have no clear purpose. 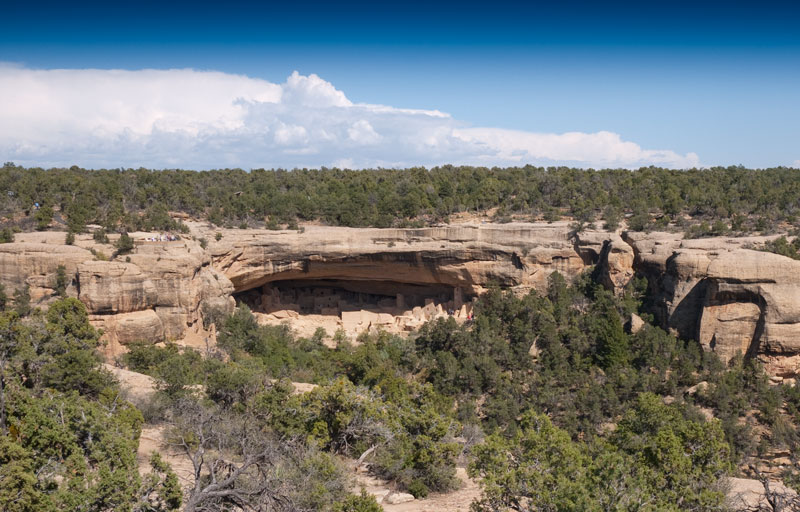 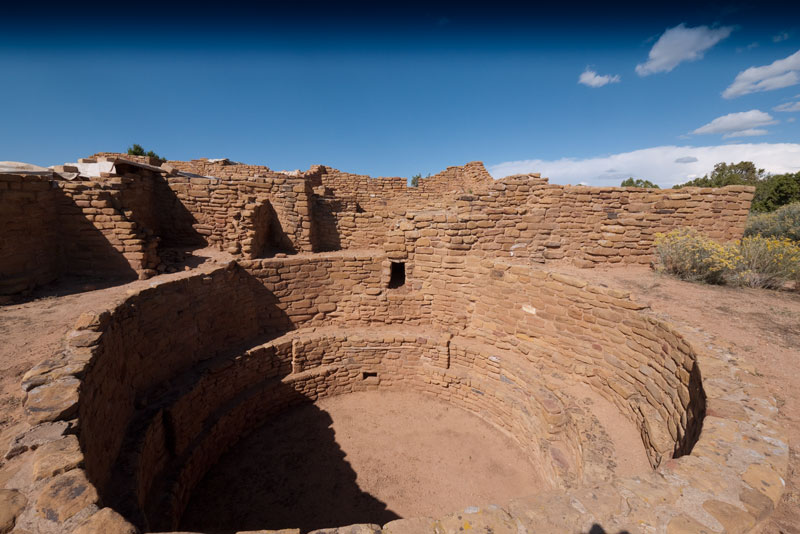 After a long day of touring these sites and walking through the various museums, we all gathered for a fare-well dinner at the restaurant located at The Far View Lodge. The sun was setting and an evening rain shower approached the mesa, providing a suitably dramatic backdrop for our evening. 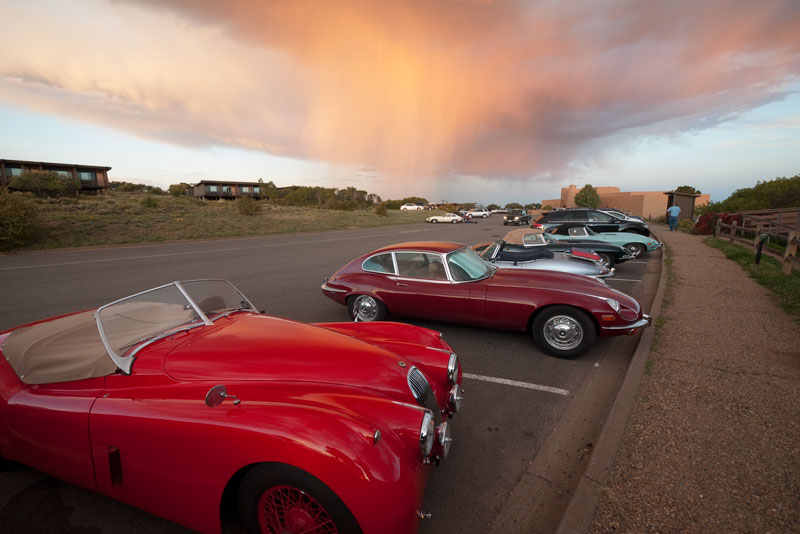 We had to wait a bit to be seated, and ended up at three separate tables, but a grand time was had by all, and we ended up closing the place. It was a great end to a fantastic week on the road with these amazing cars. Finally, here is the full week of time-lapse footage shot from that bizarre camera rig attached to my car:

I think the capturing setup failed on me for the return trip, we’ll see later today. Meanwhile, enjoy this ride.

I’ll fill in the details of what you’re seeing a bit later.

As regular readers know, I enjoy creating time lapse photography. Occasionally though I see work so good that makes me want to quit, as I am obviously not worthy. Reader Yvo Van Doorn posted the link to this video on twitter. It blows me away.

This is professional-grade work. Mine by comparison in child’s play.

I love Vancouver. In the 1990s I spent a LOT of time there, as I was working as a BCAHA on-ice official (Referee & Lineman in ice hockey) and Sue was playing on a Women’s hockey team based in Lynn Valley in North Vancouver. It seemed we drove up every weekend for something. We live equidistant between Sea-Tac & YVR, and I used to prefer flying out of Vancouver, especially to Europe, since there are so many more flights to & from Vancouver compared to Seattle. 9/11 and the massive border crossing hassles put an end to our bi-national lifestyle. Sue still attends many horse-related events in BC, but I rarely drive up except to attend a couple of Jaguar club slalom events each summer.

I ponder what impact the winter games will have on this city I love so much. I hope it doesn’t spoil it too much.

For all of you folks shivering in the snow take solace here in the inevitability of the change of seasons.

This is a timelapse from last year at this time as the big snow of 2008 melted away and Spring returned.

Testing the look on Vimeo over YouTube (what do you think?)â€¦

Winter into Spring from chuck goolsbee on Vimeo.

This is just a rough cut, with some lingering on the last days of winter. This is not the 16:9 HD final Director’s Cut… just sort of a rough draft. Let me know what you think.