Where else can you mix the ultimate in high- & low-tech?

Have a look at my latest post on our support blog. This blog is mostly used to communicate scheduled maintenance and server issues to our clients. I started using it to communicate more operational detail when we went through our big facility move in 2005. You can read a sample post here.

Since then I’ve tried to let all our clients peek behind the curtain as it were at least once a month. Big issues, such as when one of the compressors in our HVAC system failed, or when we finished our recent datacenter expansion. Service affecting issues like a snow storm that may have prevented support staff from getting to the office. Our even small issues worth sharing such as this. 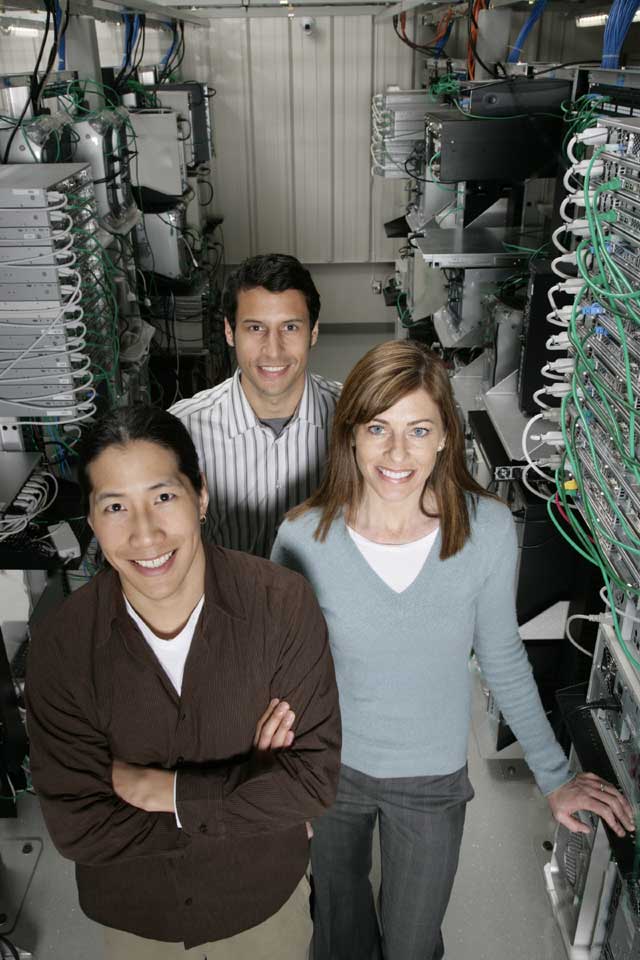 In the tradition of “Fake Steve Jobs I’d like to do a caption contest.

We have a very nice datacenter facility, and a local photography studio asked us to use it to capture some images for sale as stock photography. They spent a half-day in our facility with, models and lights, and a stylist taking over our conference room for makeup, plus one of us d.f geeks watching their every move in the facility to make sure they didn’t touch anything the wrong way!

I found it funny what they chose to shoot, and where they chose to shoot. For some reason they were obsessed with this particular part of the facility. It is a “hot aisle” meaning the backsides of the servers are all pointed inward here. The HVAC systems dump cold air on the front sides and a return removes the hot air from above. It is also the “ugly” side of both of the aisles. Power and network cables everywhere and of course all that hot air blowing on you. It is also a part of the datacenter where our “single server” colocation customers are housed. This means that the variety of hardware is astounding. This of course makes cable management a real PITA. I’m not particularly proud of this view, but what can I say? They took some good shots, which have ironically turned up in print advertising and websites of our competitors! Gotta love that. I’ll share more shots later, but let’s talk about this one.

So my caption would read “We are too attractive to work here!”

What would your caption say?

I was reading an article link on Slashdot which was talking about the “threat of outages on major Internet infrastructure” in general, and specifically about the “carrier hotel” in Los Angeles named “One Wilshire”. Every major city in the civilized world has at least one building like this. Here in Seattle it is “The Westin Building” (Ironically NOT the Westin Hotel buildings, but the old headquarters building for the hotel chain when it was located here in Seattle, before it shuffled off to New York after a string of M&A action. The Westin is a Carrier Hotel, not an actual hotel.)

Of all the threats that I can list in ACTUAL LIKELIHOOD that put a carrier hotel at risk, “terrorist attack” is not even in the top ten. (“Human Error” is always going to be Numero Uno. Nothing borks up things faster than error-prone human beings!) But for some dumb reason, everyone gets completely fixated on the possibility of a “terror attack on the Internet” in the form of a concentrated effort to “take out” a carrier hotel.

This is completely ludicrous. I will explore this lunacy in a future post (in my newly created “datacenter” category), but I wanted to point out a remarkably insightful comment I read on the /. link. It so well summarizes both the fearmongering I’ve grown REALLY tired of, and expresses the fundamental reality of American Life right now… meaning, “we’re over the shock of the event itself, and we’re tired of it being used to justify lunacy.” Read on…

Slashdot | Preparing for the Worst in IT
Sixteen days after 9/11 my daughter was born, it scared the shit out of me. I wondered if I would be drafted for war, I wondered if she would, one day go to war, I wondered if one day she would have to prepare for terrorist attacks in school, I wondered if she would be snuffed out two weeks into life by some nasty man made virus, I wondered if the virus had already been released and we just didn’t know it yet, I thought a lot about my daughter’s future and how I would raise her to deal with it. I was thoroughly terrified of the future.
Looking back on all of that I realize that Americans did more to terrify ourselves than the enemy ever could have. We’ve lost thousands of soldiers and spent billions of dollars in this war on terror and we are only more terrified, it doesn’t make us safer, it doesn’t keep the power on, we’re not flying safer, our water, internet, phones, roads, schools, our children are not safer, and hell we don’t even feel safer. It’s all at risk now, because we’ve spent all of our money and time trying to lock things down, keep things safe and protect ourselves from the boogeymen.
Today, my daughter is five, she can read, tie her shoes, and does well with math. She doesn’t know what a terrorist is and they don’t talk about that in school. Her little brother is also doing great, neither has gone hungry or lonely or cold a day in their lives and we still haven’t finished our Y2K rations. They know only one thing about politics and it’s that George W. Bush is a dumb ass. They also know what consumerism is and the ways that the TV can affect them.
I’m sick of hearing about terrorists and terrorism. I’m not scared of a terrorist attack and in fact, I’d rather be scared than watch another one of our civil liberties gobbled up by the administration or watch another funeral on the news. I’m so fucking sick of hearing about this “post 9/11” bullshit, that I could scream. We weren’t safe “pre 9/11” and there isn’t a fucking thing we can do to become safe in a post 9/11 world. Get over it. Life is fragile and raising your children in a bubble will not make them safer. In fact, once they inevitably leave that bubble they will not be able to survive the harsh reality that is “fresh air”. So thanks George W. for a nation that cannot move without asking themselves WWTTD? (What Would The Terrorists Do?)

Well said. It is a good starting point and frame of reference for my “why terrorists won’t attack the Internet” rant… coming soon.