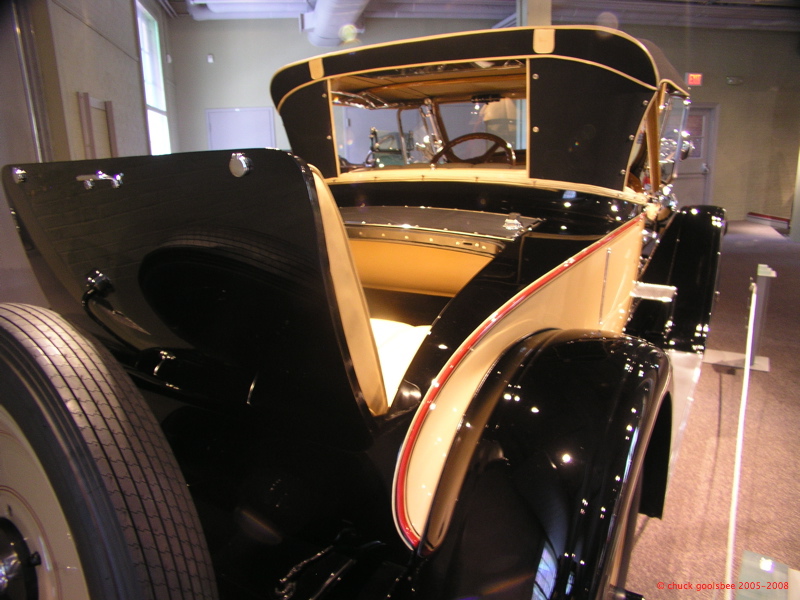 I saw this car in a museum, at a rest stop at a Vintage Rally last year, the New England 1000. If you attended that rally, (you know who you are, and so do I!) you’re ineligible for guessing. One of my favorite domestic brands here, and one of their early models. Do you know what car it is?

Be patient with me getting back to you on your answers though, as Nicholas & I will be running the Tulip Rallye all day up in Skagit County. Wish us luck! 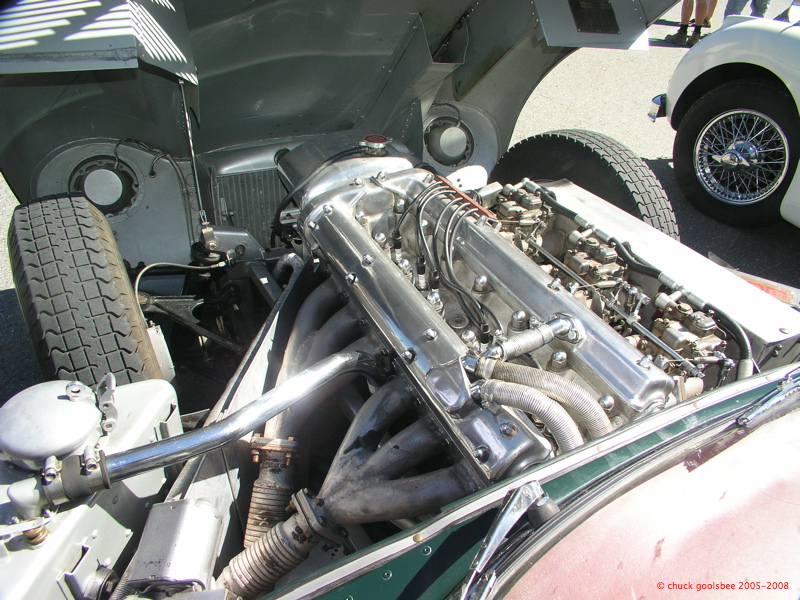 A nice shot of a famous engine bay. Know the car?

(yeah, it’s an easy one, but get ready for the weekend!)

Speaking of the weekend stumper, the Tulip Rallye is tomorrow. Nick & I will be there, how about you?

Ok, so maybe not the WORST, but certainly the lest informative I’ve seen in a long time. It makes Apple’s Time Machine errors seem positively verbose and informative by comparison! (And Time machine has even spawned a market for Error-disambiguators!)

This error message above brought to you by “Tweetie.” 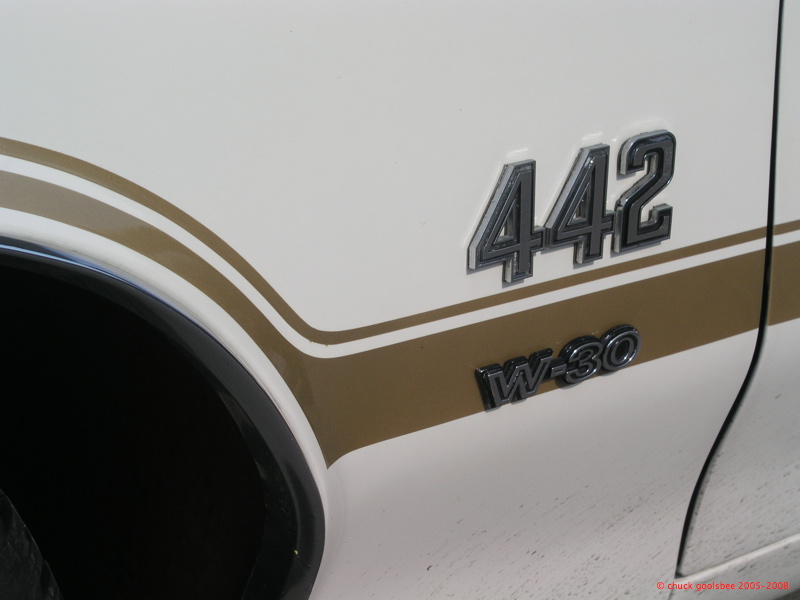 While we’re waiting for the carspotters to finally get yesterday’s CPotD nailed down to a specific model, here are a few images, some old, some new, that can’t be used for carspotting fun since they are all plainly labelled with badges. The above shot is from a monstrous Oldsmobile Four-Four-Two that participated in the GTTSR a few years ago, driven by a nice newlywed couple from Arizona. I’m not a connoisseur of Muscle Cars, so perhaps my readers can wax poetic about the virtues and history of this whale of a machine in the comments.

Here are a couple more “400-series” (I just made that up… I think) badges from other American Cars: 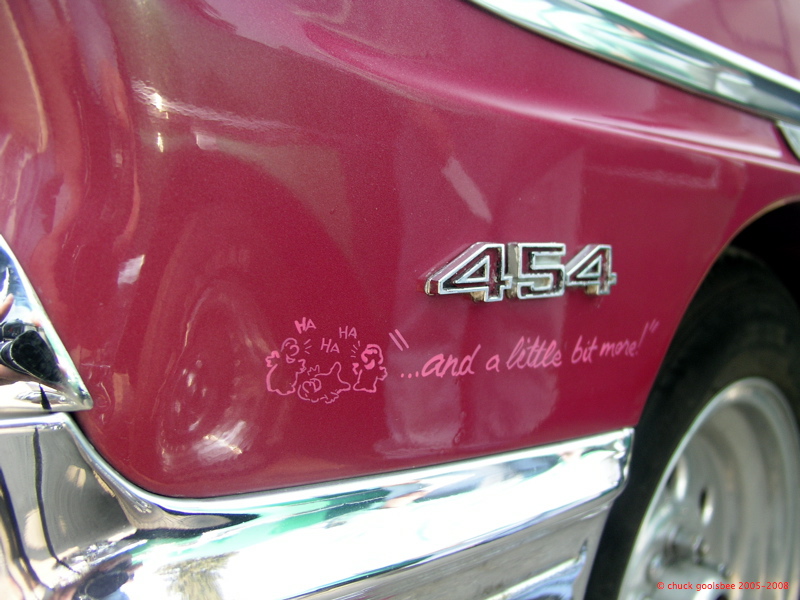 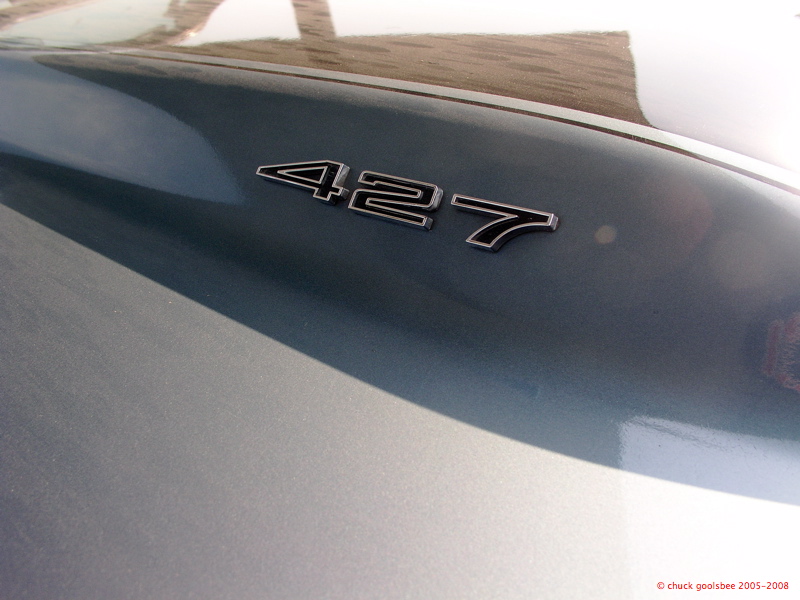 Speaking of that model of car, here is what passes for a domestic “sports car” from that era: 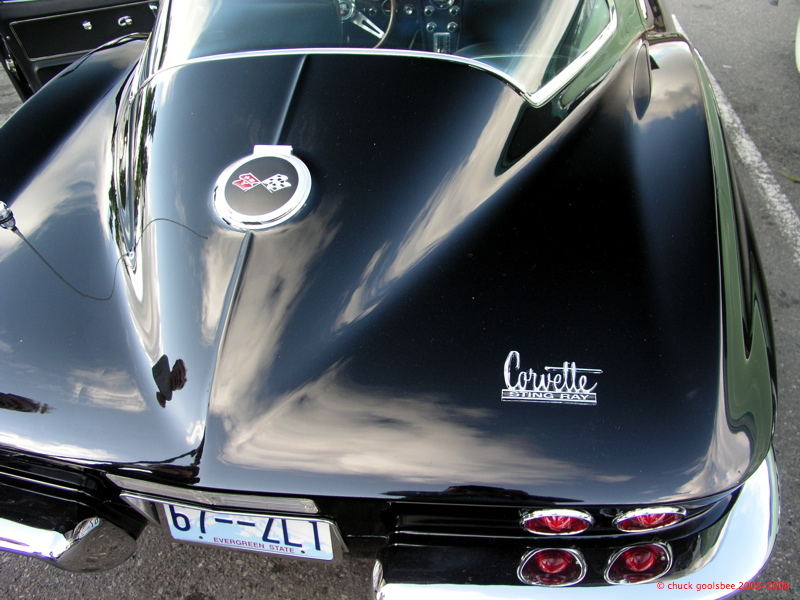 This Corvette belongs to a very nice guy here in my hometown who has owned it since it was “almost new” and has recently completed a “rolling restoration.” Very nice paint. I always liked the looks of the C2 Corvette, but I’ve always found it curious that it has been labeled a sports car. In reality it is GT, but that seems to be a lost term here in the States. 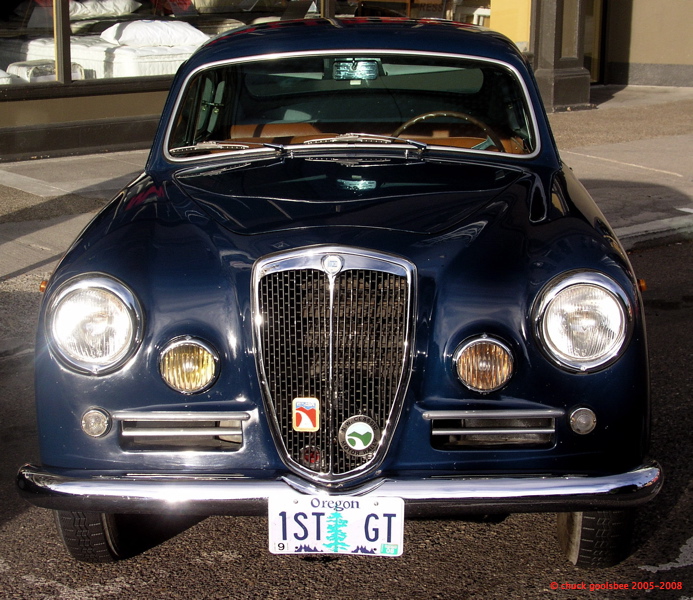 I’ve run this photo before, but I’ll run it again as it is such a historically significant car. And “Mad Dog” loves it, so maybe this will bring him out of his fortress of solitude over there in Bellevue! It is a Lancia Aurelia B24 considered to be the very first GT car, emerging to a stunned post-war world. This particular car met a rather infamous and gruesome end at the Monte Shelton rally a few years ago. Its rear suspension broke (a welding flaw in the original late-40s construction, finally coming out!) and the car rolled into a blackberry filled ditch in rural Tillamook County, Oregon. Driver and Navigator were shaken, stirred, but unhurt. The car did not fare so well. The whole rally collectively mourned for the poor machine. Truly beautiful.

Speaking of Lancia’s here’s a pre-war Lancia small saloon car I saw at a local car show on Whidbey Island a few years ago. I’ve shown it before and it stumped the carspotters. Speaking of pre-war Italian cars, here is an honest-to-god Grand Prix winning Alfa Romeo race car. I’ve posted it here before, so I won’t drone on about its history. Instead I’ll just look and admire: This thing was the ultra-high-tech of its day, truly akin to our F1 cars now. Look at those big drum brakes. Look at that gorgeous middle-mounted chain-driven twin-cam straight-eight! I love the number painted in the grille! Speaking of grille’s this is what it looks like when you are being eaten by a hungry Jaguar: Speaking of Jaguars, here is Jerry Mouton’s famous ‘MIK 182″ S1 FHC E-type, photographed in VERY low light after I met up with a bunch of Jag-Lover’s folks at a beach-side restaurant in San Francisco many years ago when I was there on business. What a great night. 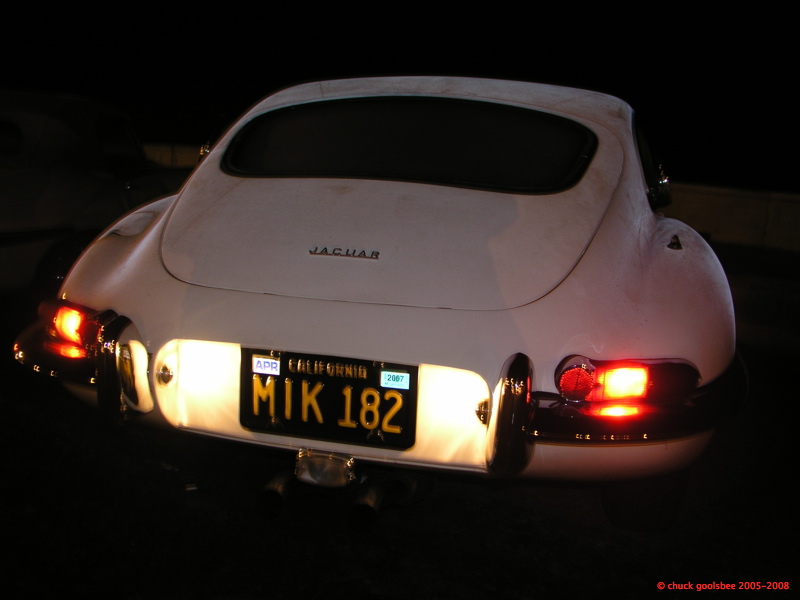 Hope you enjoyed the photos. I have a few hints to apply to yesterday’s “stumper” (and here I thought it was an easy one!) so check back. 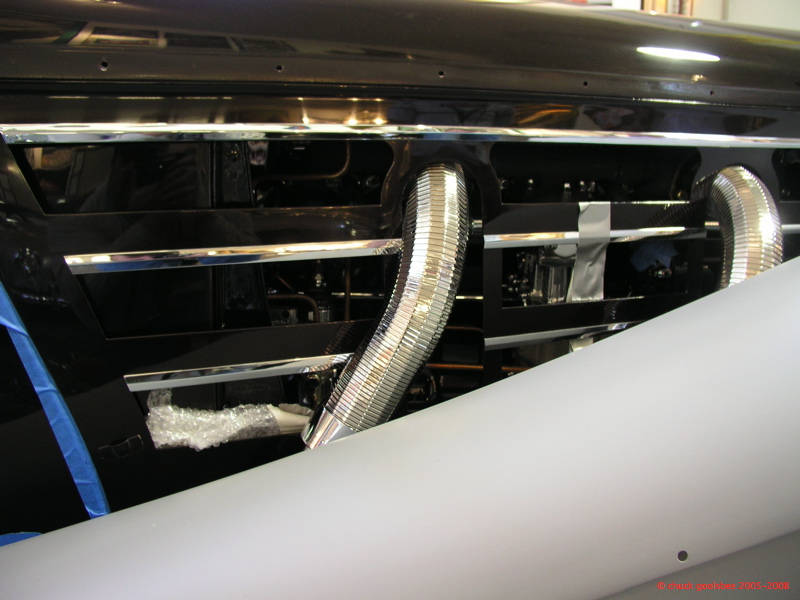 I saw this car at a rest stop of the “Annie & Steve Norman Classic Motorcar Rally” a few years back. It was the centerpiece of a very valuable collection, arrayed around a true “Garage Mahal” near Stanwood, Washington. It is about one-third the way through a complete nut-and-bolt restoration, but even stripped and primer-ed it was stunningly beautiful from all angles. Even in their day (surrounded by Bugattis and Duesenbergs) this car was ne plus ultra. In coming posts I’ll have some photos of the car’s mechanical bits, which are works of art.

Do you know the car?

If you have a car and any interest in TSD rallying I HIGHLY recommend the rally mentioned. They’ll take about any car (even new ones), and the roads, cars, and people are a ton of fun. My dad & I are going again this year, which will take place on Vancouver Island. Doug the Rallymaster is a total gearhead and always plans a stop or two at some amazing collections. Come joins us! 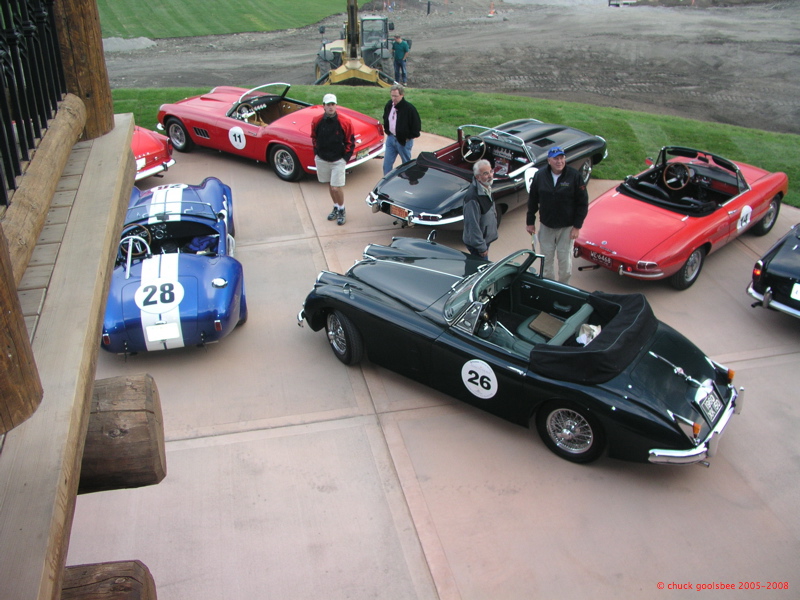 Today’s CPotD was a nice photo, but it clearly displayed a badge, so made for no challenge for the carspotters among the audience. Mind you none of the cars here are all that challenging, but what the heck. This photo was taken on the 2006 GTTSR as we were all posing for a group shot. The photographer was up in the cherry picker seen in the background, and several rally cars were parked below. The rally participants were all standing on the balcony where this shot was taken from as the setup was going on below.

Can you name all the cars? Two of them are cropped off, and appear to be mirror images of one another. Therein lies a small challenge. 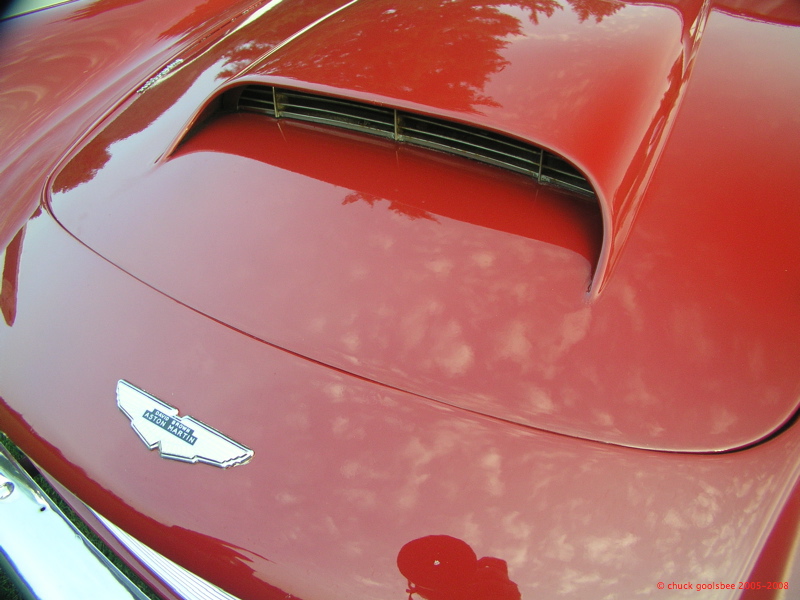 I know… I just have a thing for the bonnets of Aston-Martins, deal with it.

I’m ambivalent about both the presence of those puffy clouds and my camera appearing in the shot. Like it? Hate it? Sometimes both. What do you think?