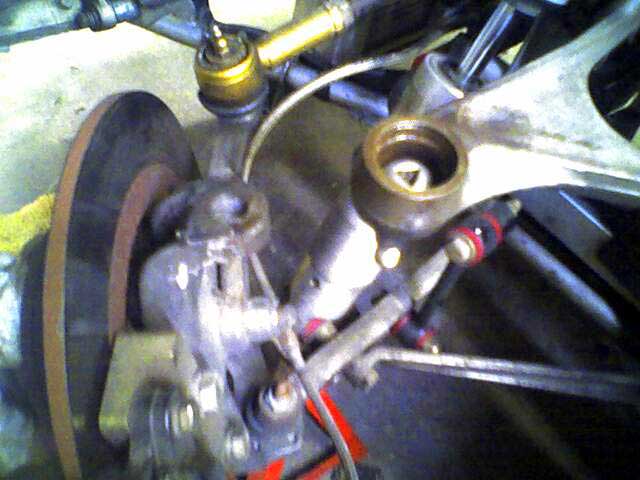 apoligies for the crappy cell-cam image… I left my good camera at home by mistake!)

I took yesterday off work, with the specific purpose of finishing the prep work for the Going To The Sun Rally (and the nearly 1800 mile round trip there and back.)

At the crack of dawn I drove the 65E, in overcast skies and light mist, up to Chilliwack BC, to visit Geoff Pickard at English Classic Cars. Geoff rebuilt my engine last summer and it had developed a rattle in the head since then. He had also fixed one of my rear hubs in the spring and we wanted to have a look at the opposite one to make sure it had not suffered the same fate as its twin.

The drive was uneventful, and I arrived promtly at 8:45 AM. We went to work on a list of things as the engined cooled. Geoff went into the hubs and I started on my list of things to do.

If you recall, my driver’s side rear hub did not get properly looked at in the post-flood resto by Classic Jaguar and had seen the bronze bushings disintegrate under the lubrication of a fine paste of bayou mud and rainwater. The passenger side hub was just the same, though with less damage. Geoff replaced the chewed up bronze bushings with stock needle bearings and his witches brew of lubricating slippery goo.

I replaced a tie rod gaiter on the passenger-side front wheel. In my winter lubrication routine in March I found a torn gaiter there (a “TeamCJ” mechanic had bent the safety wire back on itself when they snipped it off, eventually causing the wire to puncture the boot), replaced it with a temporary one, and finally had a proper one from SNG to replace it. So Geoff was futzing with the rear hub, I was futzing up front. He finished a full hub rebuild in the time it took me to replace a tie rod gaiter (Geoff is as fast as an F1 pit crew, I’m the world’s slowest mechanic!) so he checked the opposite front wheel and found a significant amount of free play in the ball joint of the top wishbone. He had that apart in no time and found the ball joint was improperly shimmed. We had that sorted out by the time I had my wheel back on.

I then got a bunch of lightbulbs replaced, and my right turn signal working again. As I was sitting on the floor Geoff nearly had an aneurysm when he saw the screws I had pulled out of the signal lamp cover of the car. At first I didn’t know what he was going on about, but he pointed to the three completely different sized, shaped, and colored screws I just had removed from the car and shouted “Those are NOT proper!” (Have I ever mentioned that Geoff is a bit picky about Jaguars?) He rushed off to a parts bin, brought back a box of screws and pulled one out: “This is a proper screw. Find two more and then toss *those three* (he sneered that point) over there on the bench.” I dutifully followed his direction, not wanting to insult him. 😉

A few more minor tasks complete, we took a break for lunch. After lunch the engine had cooled sufficiently to have a look at the head. Not wanting to be in Geoff’s way, I went about the task of changing the oil in the differential. It is the only part of my car that consistently leaks. No matter where I park, it never fails to leave a SINGLE drop of oil. It never leaves two, but I figured one drop here, and one drop there eventually leads to not enough left behind. I crawled under the car and opened it up, to be pleasantly surprised to find a NOT empty diff. 😉 While I was under the car, making unhappy noises (anyone who has ever re-filled an E-type diff knows what I mean by “unhappy noises”), Geoff was above the engine, making happy noises.

Based on the noise the engine was making we both suspected a tappet or tappet shim being loose. As it turns out the tappets were fine, and it fact all still within .0001″ of where they were originally set last summer. The noise was found to be a loose top timing chain on the exhaust side of the bottom chain drive. An easy fix! That was all sorted out by the time I had the diff refilled. While down there I also fixed a broken exhaust hanger. We then flushed and refilled the radiator since my belt-throwing adventure earlier this summer had boiled off quite a bit of coolant and I was unsure of my mixture. Better safe than sorry.

All buttoned up, we took it for a test drive. I insisted Geoff drive since I already know the car but wanted him to get a sense for it. The engine sounded *wonderful!* I haven’t had much time in the passenger seat of the 65E the past few years, but it was fun to be there with Geoff driving. He damn near broke my spine a few times, punching the loud button and snapping my head back!

On the way back he went to honk the horn (at a driver backing an SUV out of a blind parking space) and found it inoperative. So we fixed that when we arrived back at the shop. Troubleshooting from the horns back to the steering column, where we finally found the fault in the contact between the button and the inside metal of the steering wheel hub… literally the last place we could have looked! I climbed back behind the wheel and pointed the car south towards home around 3pm.

The fine US customs people at Sumas decided to inspect every fricking nook at cranny of the car! =\ I have never had a problem with the Jag at the border, but I must have fallen on the random “search this car” number this time. They looked in the boot, under the boot, though my toolbox, the interior of the car, etc. What a PITA!

In Sedro-Woolley, an oddly named town in Skagit county, I nearly had an accident when a person in a complete beater pulled out in front of me making a left turn out of a grocery store onto SR 20/9, where I was driving along at 45 MPH or so. I came within inches of hitting them, the brakes locked and me skidding in a cloud of smoke. The experience shook me up pretty bad and I had to pull off into a gas station and try to calm myself down.

I was hoping for an uneventful rest of my ride, but it was not to be… as I approached Arlington the skies opened up and I found myself in a downpour! I had nowhere to pull over and raise the top, but the tonneau cover was on, at least covering the passenger side. I just kept on driving. Unfortunately as I arrived in town, the traffic thickened up to where the speed-effect of the OTS shape no longer kept me out of the rain. 🙁 I called home and asked my son to have the barn door open for me when I arrived so I could at least get under cover swiftly.

After my arrival, I did a quick oil and filter change, along with replacing my temporary fuel pump with the native-pressure