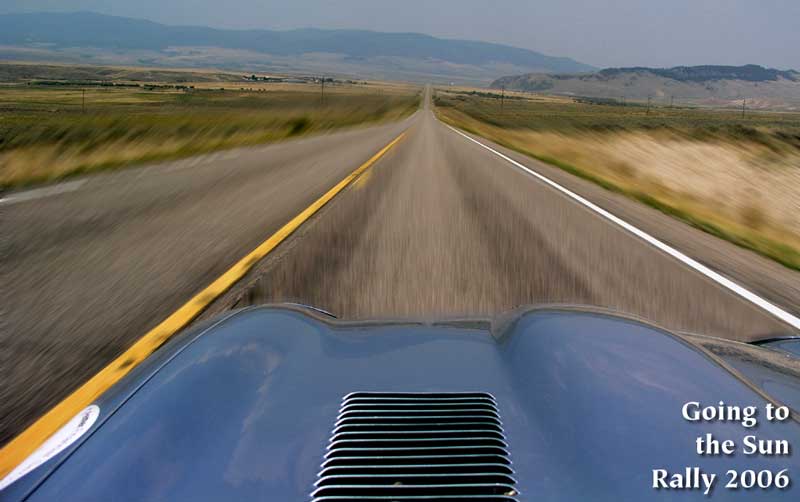 Day two of the Going To The Sun Rally dawned with an excellent breakfast at the Spanish Peaks Club, followed by a group photo with a selection of the cars, including the 65E (proudly plastered with bugs!) The photographers were up on a crane, with the cars below, and the people up on the balcony above. It went pretty well, and we stayed there for the driver’s meeting.

After I had parked my car, but before the group photo, I walked around and shot some car photos, including the one below. It is a Sunbeam Tiger, reflected in the finish of a Shelby GT350-H (the original from the 60s). I took a bunch of other shots too, which you can see via the usual “all my photos” link at the bottom of this post. 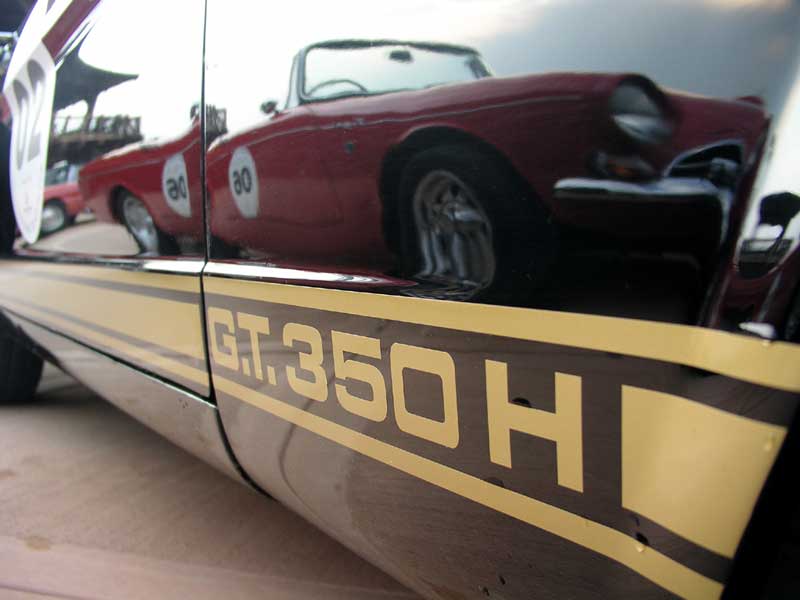 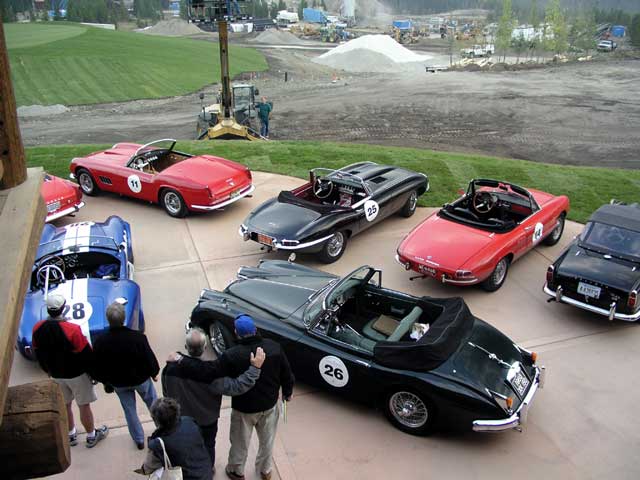 While the official photogs shot the big group photo, I squeezed off a shot of some folks and cars below. So when you see the final product, you can spot me on the balcony above by this arrangement below. 😉 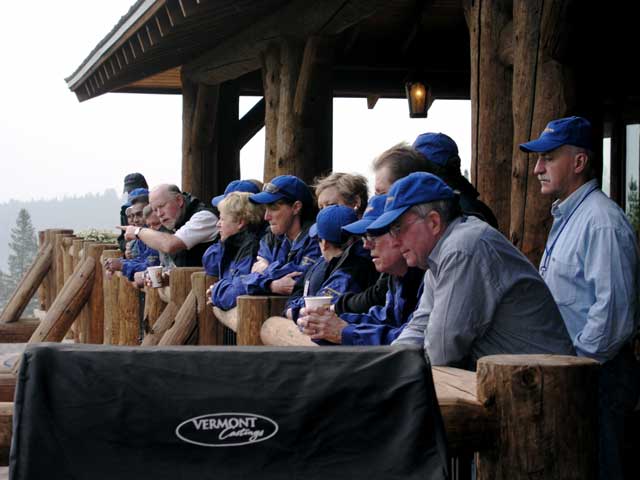 The Driver’s Meeting commenced right afterwards, and I took the above picture as people listened.

We all left the Spanish Peaks Club and headed out of Big Sky. We took a detour to our friend’s house to say “bye” to my Mom and drop off some excess stuff. We then fuelled up at the Conoco station on US 191 and headed north. The drive down the Canyon was wonderful, though crowded. The Gallatin Canyon is no longer the sleepy place it was when I was a kid.

We took a left at Gallatin Gateway and made for Ennis. Unfortunately it was still very smoky from forest fires and the spectacular Montana Rockies were obscured in the smoky haze. Along the way I zipped along at “Ludicrous Speed” with a race-prepped Sunbeam Tiger. I lost him when he passed a truck, which I got stuck behind due to Murphy’s Law of Mountain Driving (“the solid yellow line will not leave your lane until oncoming traffic appears.”) I did however overtake the Davis’ very nice old red Corvette and manage to catch some photos of it as we approached Virginia City. 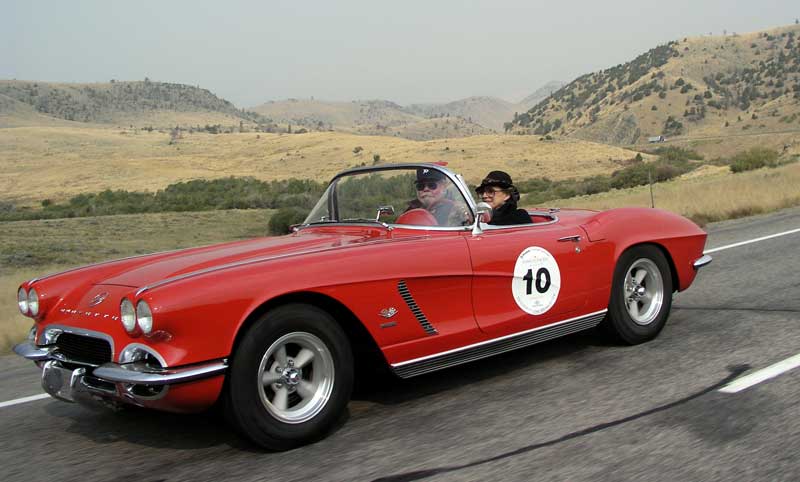 David E. Davis is the editor of Winding Road The car mag that printed my letter last week. It was cool to meet him, and we’ve had a few opportunities to converse with him and his wife this week. Great folks. Nice car too.

We had a scheduled break in Virginia City, one of the old territorial capitals of Montana, and a place steeped in old west history. I haven’t been there since I was about 8 years old, but to be honest, I spent most of my time here today shooting photos of rally cars. The sacrifices I make for my readers! Here is a sample: 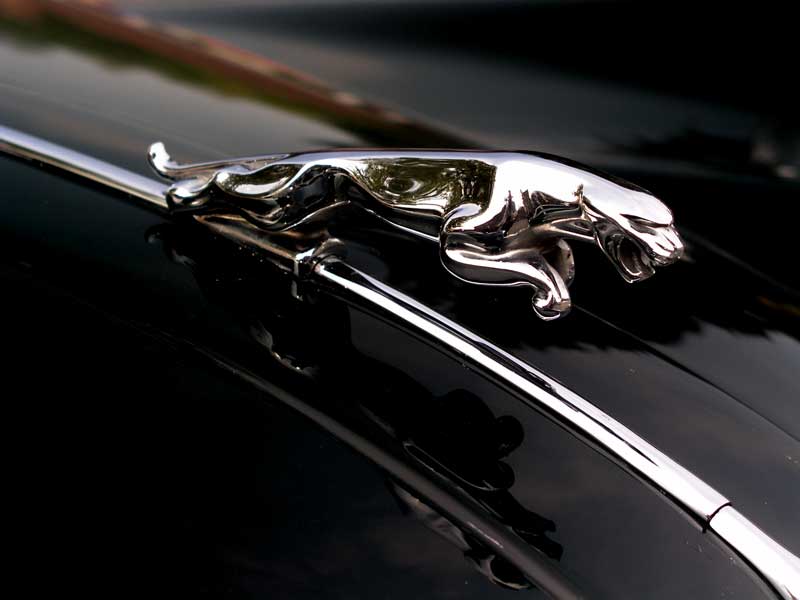 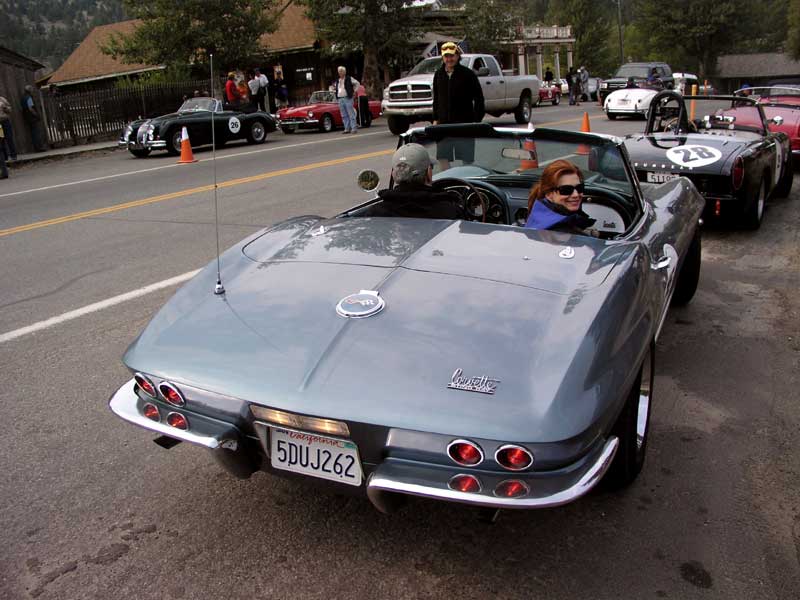 You can see the rest in my “all photos” link below.

After the break we took some wonderful roads through southwest Montana (minus a short run on I-15) and on to lunch in Jackson. 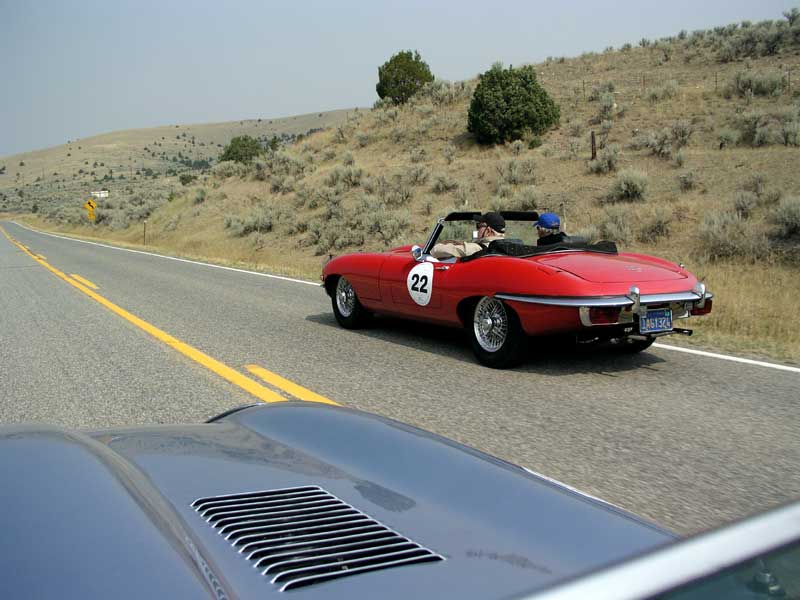 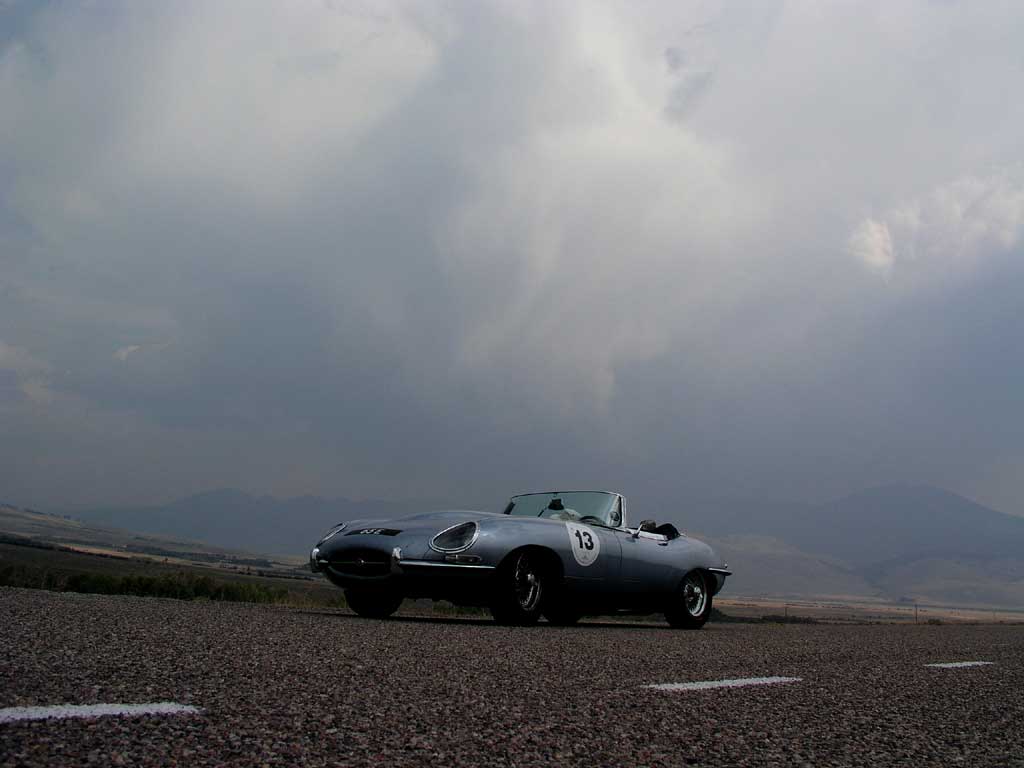 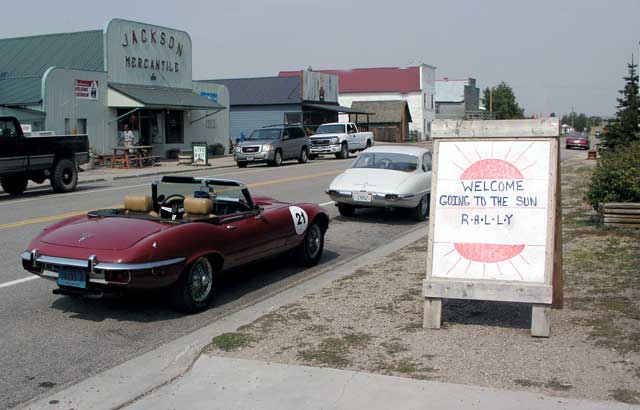 Lunch was a sandwich buffet, which really hit the spot for me, with some iced tea. I also had a chance to say something I’ve always wanted to. Two folks that my Dad knows from other vintage rallies were having car troubles. One was driving a Corvette and the other an Olds 442. Both muscle cars were having carburetion and fuel consumption issues, perhaps due to the altitude. The E-type has been running well and using gas at a very reasonable rate (17-20 MPG, amazing given our occasional high speed runs!) So I leaned over and said:

“You should really get rid of those unreliable American cars and get yourselves one of these Jaguars!” 😉 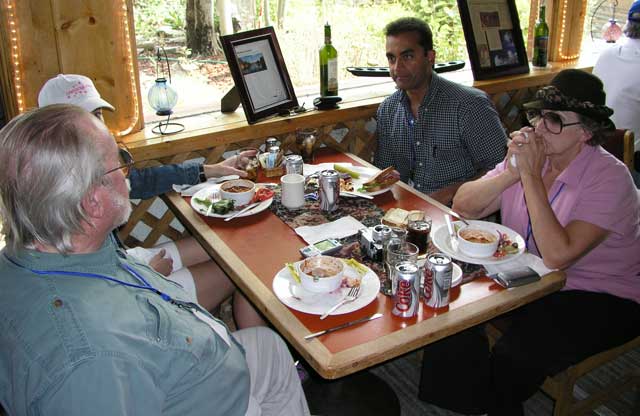 After lunch we went 20-some miles to the next town (Wisdom MT) to get gas. 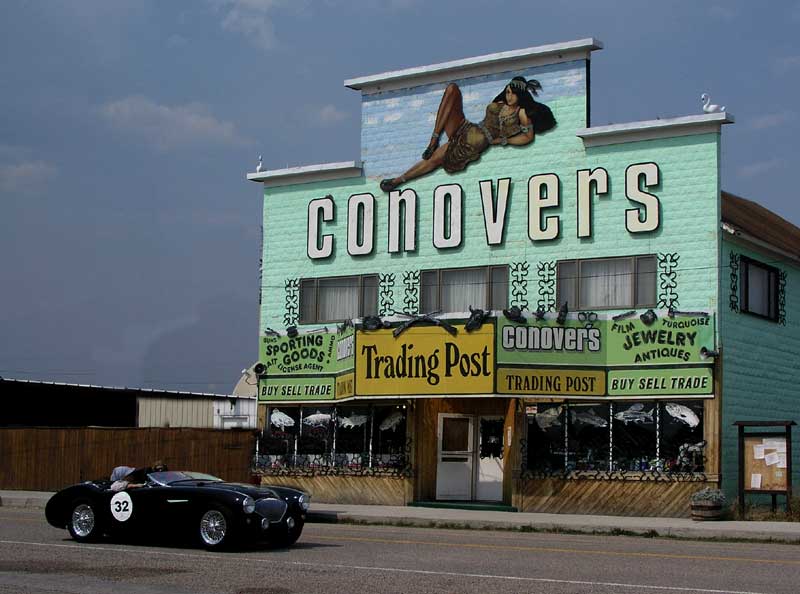 It was funny because when we arrived this gas station had FOUR Jaguars fuelling up, two XK 150s and two E-types. The locals were all staring at us in disbelief. The Healey pictured above showed up as we were leaving, altering the all-Jaguar chemistry. It was still like being on Mars for the locals, who rarely see anything but pickup trucks.

We actually saw a bit of rain as we approached Lost Trail Pass. I hope it puts out the fires, but I doubt it. It was refreshing to get hit with a few big cold drops though!

We climbed up to Lost Trail Pass, and joined US 93 which took us down into the Bitterroot valley, and Darby, Hamilton, and Missoula. This was a familiar road for both me and the 65E, as it was how my son and I passed into Montana back in 2003 on our summer roadtrip. This valley gets more populated as you travel northwards, so progress was frustrating compared to the open roads of earlier in the day. The smoke was again pretty thick, with sights such as Trapper Peak being almost completely obscured. If I didn’t know exactly where to look I would not have seen its vague outline in the haze. My dad drove from lunch to Hamilton, and I took advantage of the situation and limited navigational duties and took a little nap. This is not an easy car to sleep in (unless you are a nine year old!) but I somehow managed 40 winks somewhere between Darby and Hamilton. We switched drivers in Hamilton and I drove the rest of the way to Missoula. After being on the open roads, Missoula was a bit frustrating, but we managed to find the hotel. As is to refute my statement earlier, the 65E started idling fast (1200 RPM). We’d dropped a lot of altitude since I had adjusted the SUs a bit in Big Sky, as when we arrived it was idling too slow (300-400 RPM). Thankfully the SU carburettor is a stunningly simple design, and I was able to get all three adjusted within a minute or two and idling well at 700 RPM.

We checked in and went to the room, where I did some photo editing before dinner. Dinner was awesome. I once again was about to order salmon when the little voice inside my head said “You are in Montana ferchrissakes, take the beef!” So I ordered the rib eye, and it was awesome. I’ll start eating salmon again when I get back to the Seattle area. 😉

I even had enough time tonight to throw some basic captions onto my “all photos” page! You can ssee them all here.

One thought on “GTTSR: Day Two”