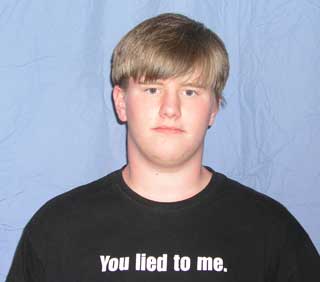 My son is hoping to further his study of languages by spending a semester abroad, in either a Spanish or German-speaking country next year. In order to accomplish this we tried to renew his US passport. He had one 10 years ago, when we were in the UK, but it has long ago expired. Besides, he is about 2x the size of the photo in that passport, since he was six years old when it was taken. He’d be embarrassed to travel with that photo, so we had a new one taken. His mother took him and his photo (and birth certificate, and Social Security card, etc etc) down to the post office in Everett today (a 30 minute drive) because in order to get a new US Passoprt he must appear IN PERSON, with his parent, since he is a minor. We brought along the above photo.

The fine civil servant refused to accept the photo, and sent them away.

The reasons? The background is “too blue”… and the words on his shirt.

For those of you not aware of what turns the crank of the under-18 crowd, it is a quote from this clip. I gave him the shirt for Christmas, and I think he hasn’t taken it off since. Yep. Refused a passport due to a video game cartoon T-shirt.

When my wife enquired as to why, the outstanding, ever-vigilant civil servant hero replied: “It is all because of 9/11”

My wife replied, “None of the 9/11 hijackers had a US Passport.”

The government representative had no response to that.

So we’re going for a second try next Monday with this photo: 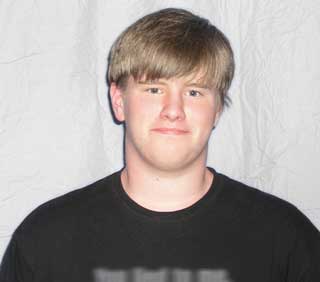 Ah, the magic of Photoshop!

4 thoughts on “My son, the (potential) teenage terrorist.”