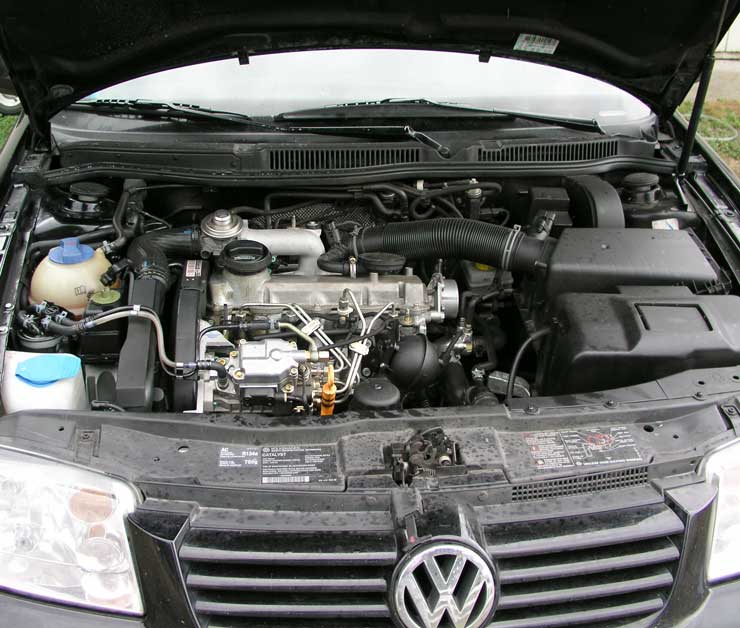 Above: The amazing 1.9 Liter, VW TDI engine. The thing that makes my Jetta go.

OK, so everyone knows I’m a cheapskate and make my own Diesel fuel from veggie oil. (yes Paul, I promise a diagram of the filtering setup soon!)

I also am a total lead foot and don’t drive very economically. I rarely drive the speed limit and frequently exceed it by a fair margin. I’m not an idiot, and I don’t speed where it would be dangerous to myself or others. I have only been *ticketed* for speeding twice in the past 10 years, so I must be good at avoiding speeding tickets (I have been stopped several times and warned though.) There was a blog post I saw linked off digg.com a few weeks back about avoiding speeding tickets that was partially wrong, and misleading in some aspects… perhaps I should write up a full post of my own. Anyway, this isn’t about speeding… in fact quite the contrary, it is about fuel economy. So even despite my lead foot and frequent runs at autobahn speeds, my car still averages 50 MPG. I find that amazing. It begs then how well would it do if I wasn’t such a pseudo-Schumi?

I once again drove half a tank (300 miles) in my VW Jetta TDI this past week or so, and when I topped it off tonight on my way home I was gobsmacked by the mileage I made. You see I spent the week driving verrrry carefully. This meant upshifting at 2000 RPMs on the tach, coasting down hills in neutral, coasting to stoplights and stop signs in neutral, (mostly) driving the speed limit, etc. I went 300 miles on 4.3 gallons of my veggie oil and Diesel fuel mixture. That is 69.767 miles to the gallon. That is US gallons for my overseas readers, which equals 0.832 Imperial gallons, or 3.78 liters.

I could have managed 70 MPG if I hadn’t succumbed to temptation and NOT had a several mile long run @ 100 MPH a few nights ago. I ran an errand on Wednesday night that put me on a deserted divided highway at around 10 PM. I came off a stop light and onto the freeway doing my usual “shift @ 2000 rpm” routine, but once I realized I was alone I just kept accelerating to the mythical “ton” and rode along for several miles like that with a smile on my face. I did coast for quite a way after the ton-run to make ammends… in fact I was able to coast UP a big hill after that. 😉

My only issue with driving like this is that it is mind-numbingly boring, and lacks that je ne c’est quois… that essential FahrvergÃ¼gen I seek when behind the wheel. This is why I can never make it past half a tank! If I ran it all the way I’d die of boredom before I ran out of fuel!

So was this in some goofy anemic Hybrid filled with digital gizmos? Nope. It was in a low-tech car with an oil burning engine, albeit one running a very “green” fuel. I challenge any Hybrid or even electric car to go as far, as fast as a TDI equipped car. It just can’t be done. I could run from my home to Red Bluff, California (~700 miles) on a single tank of fuel, and do it in about 8 hours. Amazing. This car amazes me.