The final installment of of my collection of favorite photos from 2009. Tell me your favorite from this batch in the comments. 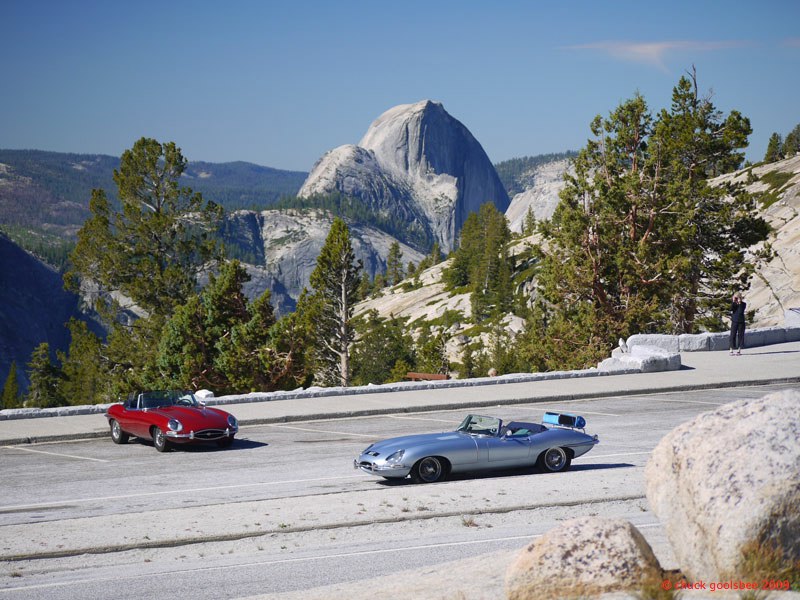 I was blown away with the scenery when Larry and I pulled into this overlook. I grabbed the G1 and used my long-neglected rock climbing skills to ascend the side of a granite dome across the highway to look back and get this shot of Half Dome, and our cars. It wasn’t until long afterwards that I spotted the woman at the right, turned away from the grandeur of Yosemite Valley and taking a picture of the two Jaguars. Sir William would be proud! 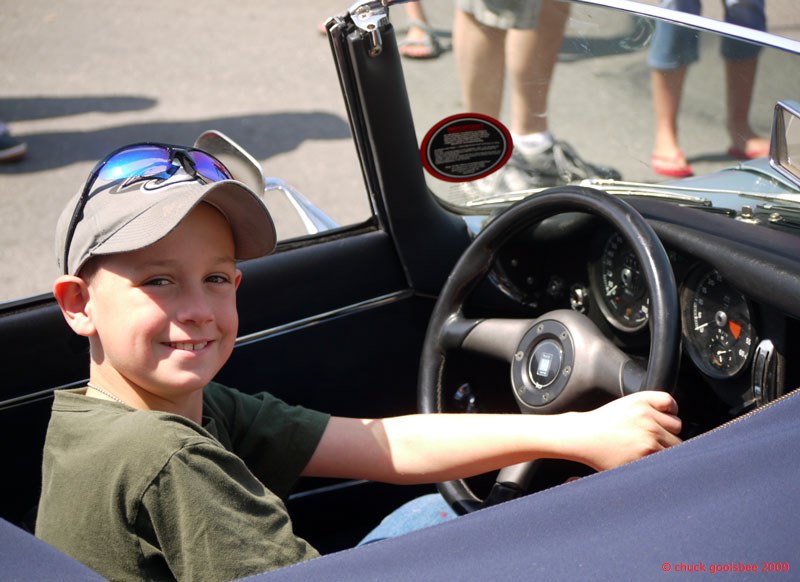 Taken with the G1. I’ve said this a lot, but I’ll say it again: I hate the “Do Not Touch” ethos of the car show culture. So I do what I can to combat it, the only way I know how, which is to let people touch, sit in, and even drive my old car. I rarely “show” my car but when I do I’m happy to let anyone sit in it. The two most satisfying types of “car touching” are: 1. Kids. How best to make a kids day than to let them slide behind the wheel and look out over that bonnet? Looking at the 160 MPH speedometer and imagining the needle waving about at the high end? and 2. Older women. It is priceless when some 50/60-something woman says to me ‘I’ve always wanted one of these…” and I reply, “Go ahead, climb in!” The looks on their faces is wonderful to behold as they (after several rounds of “really?”) slide into the seat and grab the wheel. It is a faraway look, of imagined youth and power, mixed with lust and dreams lightly realized. Men never get that look. Women sure as hell do. It is a powerful set of emotions that create that look, and I’m happy to be the provider… if only in a small unconnected way. Someday I’l remember to capture it in a photograph. 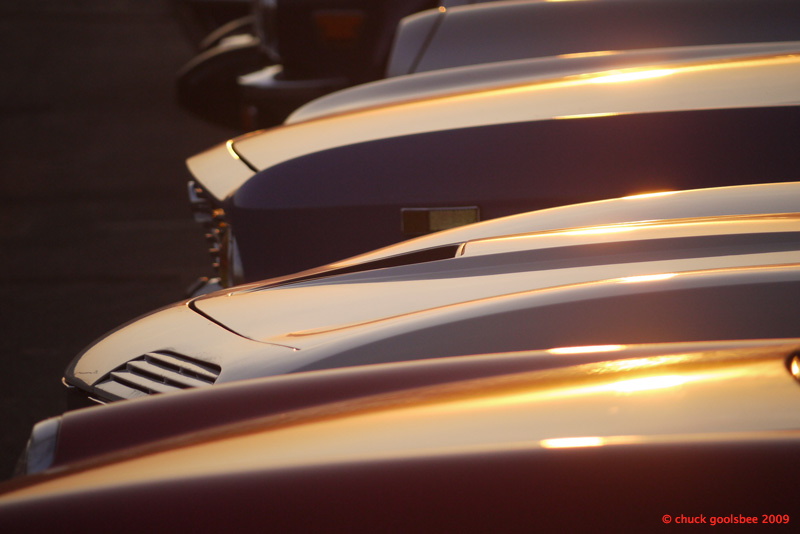 I walked out to the parking lot to check the 65E’s oil before breakfast on the last day of the 2009 Monte Shelton Rally. The sunrise laid a golden glow over the collected vintage cars, making for this luminous shot. Taken with the G1. 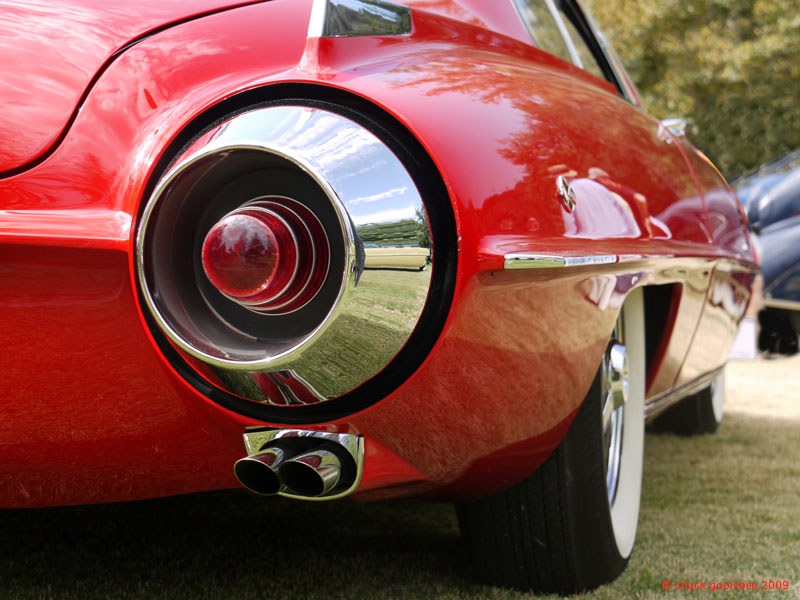 I can not even recall which Ghia concept car this was, found sitting on the concourse field at the Art Center Car Show in July. Unusual low angle gives the shot some je ne sais quois amid the usual car show shots. taken with the G1. 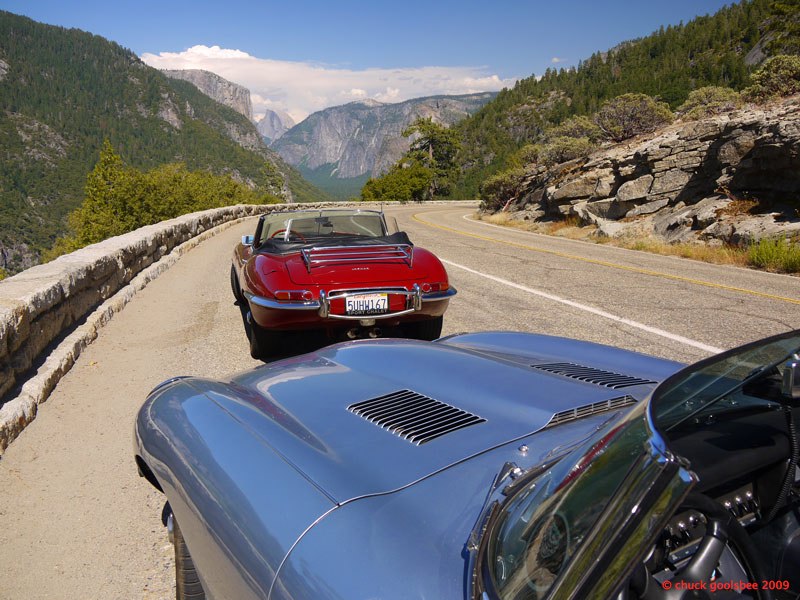 Larry Wade’s series 1 3.8, and the 65E posed at a scenic overlook as we enter Yosemite Valley. I was looking for an XKEdata.com calendar shot featuring Larry’s car (it didn’t get picked, sorry Larry!) and it was a miracle that the crowds and traffic vanished for a short instant allowing this pure car+landscape image. taken with the Lumix G1. 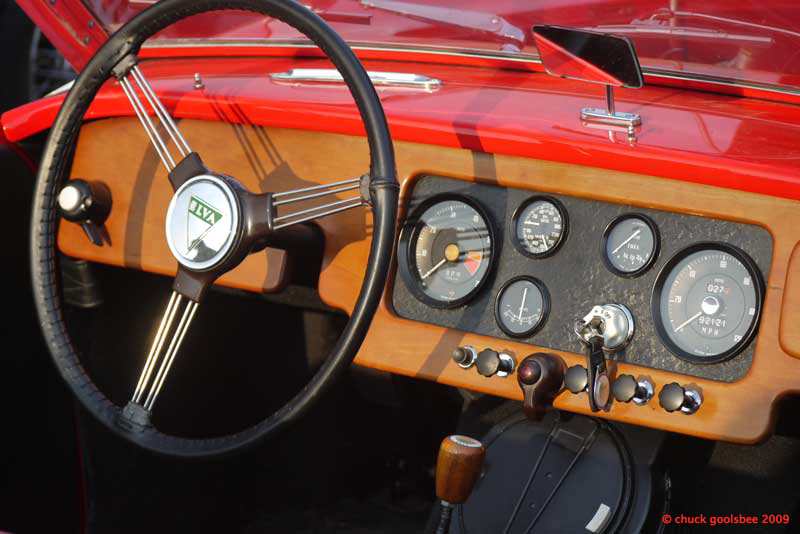 A gorgeous little Elva was on the 2009 Monte Shelton rally this year and as we queued up for the first transit stage of the morning I was able to shoot this photo of its quaint and distinctly British dashboard as we awaited route instructions. Taken with the Lumix G1. 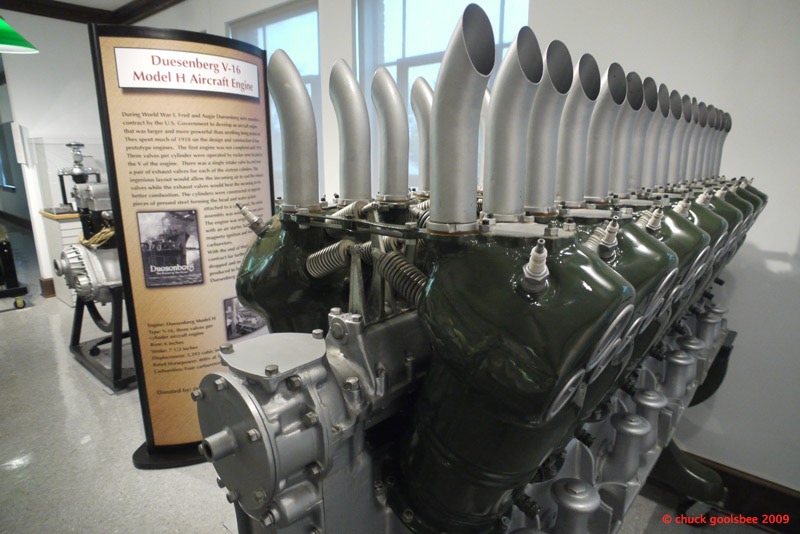 The Duesenberg Brothers were engine builders, not coach builders. They made world-beating machines that powered race cars, luxury cars, race boats, and aircraft. This model was on display at the ACD Museum. Awesomely beautiful. I’d love to hear it run! Taken with the Lumix G1. 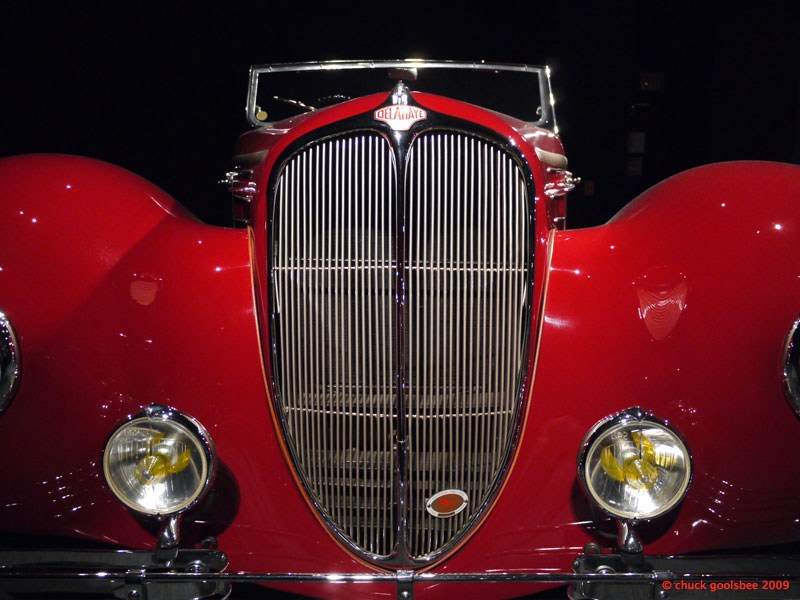 A stunning Delahaye on display at the Blackhawk Collection in Danville, California. taken with the Lumix G1. 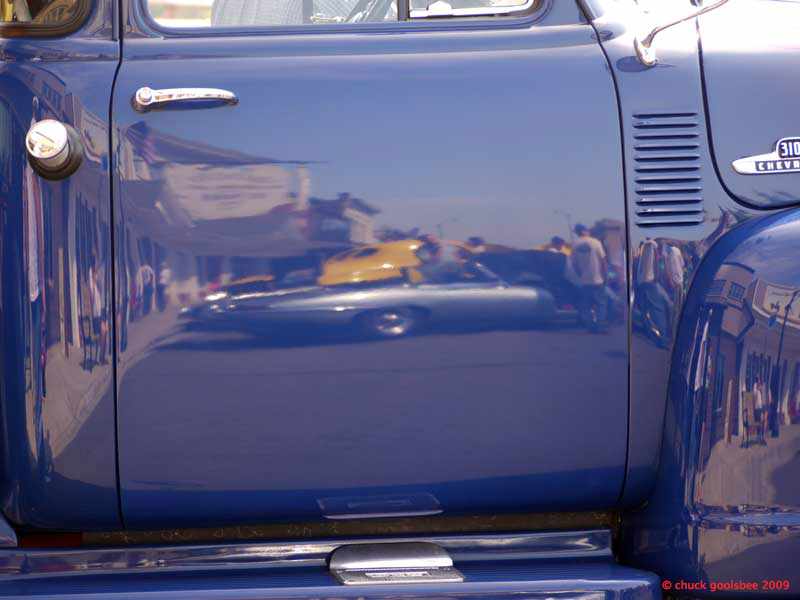 The things you see reflected in the great paint of some cars, or in this case a pickup truck, at small town car shows. 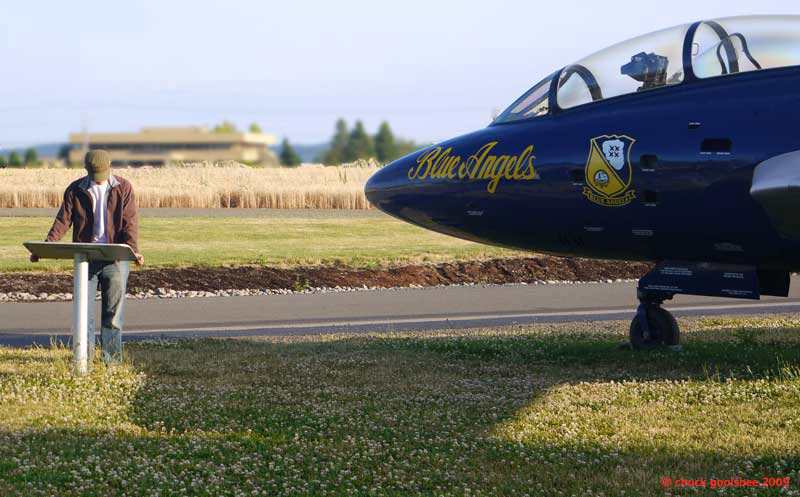 The first evening of our Father/Son Road Trip took Christopher and I to McMinnville, Oregon and the Evergreen Air & Space Museum. The museum was closed but Chris & I wandered around the exterior displays in the long evening twilight. Here is Chris looking at the data about the Grumman Cougar jet fighter in Blue Angels livery in front of the museum. I like the composition and lighting of this, and it captures Christopher’s contemplative and studious nature. The following morning we went back to the museum and the highlight was a tour of a B-17 by a former pilot and WW2 veteran. A simple act by Christopher made the man’s day (scoll to page 10 in that link to read the story.) taken with the Lumix G1. 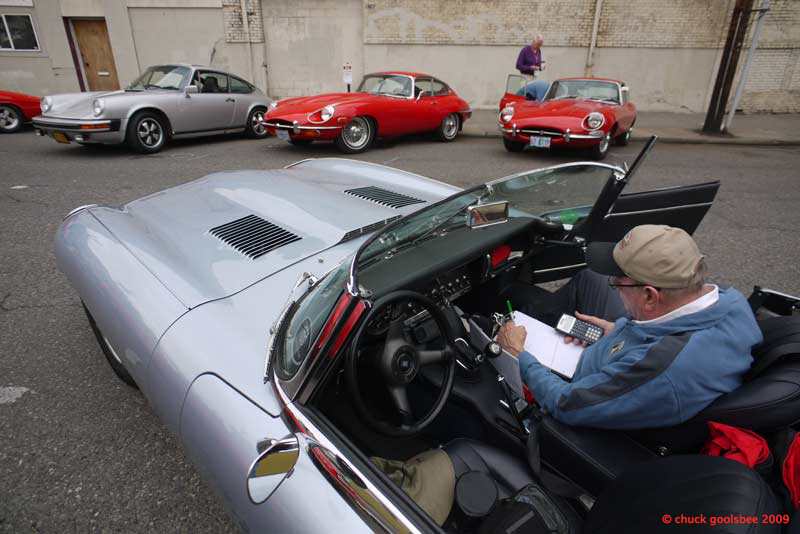 We’ve just received the route instructions from the Rallymaster at the start of the Monte Shelton and we’re going to hit the starting line in about 5 minutes. This is how a Navigator spends their “vacation”… staring at incomprehensible sheets of paper, speed tables, formulas, two clocks, and a calculator. I just do what he tells me to do! 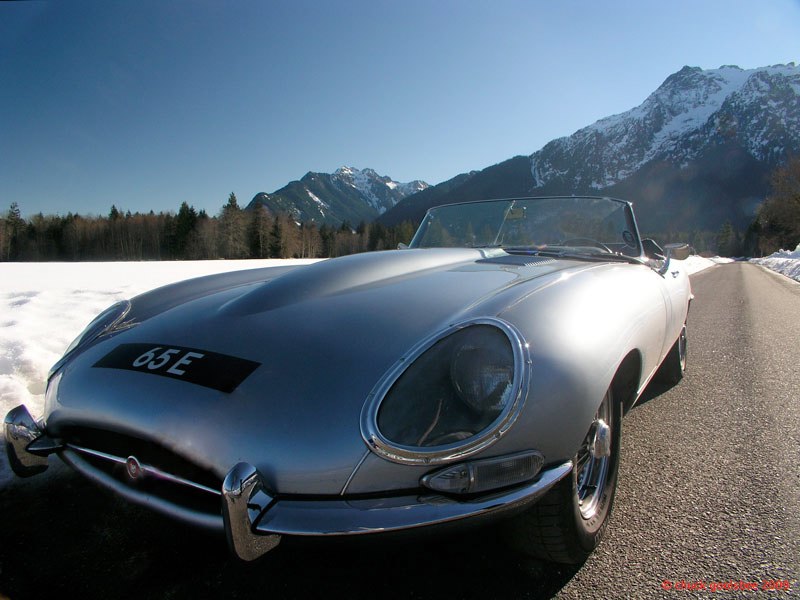 A re-creation (sort of) of the famous ‘Miss January’ shot taken of the 65E originally shot on Super Bowl Sunday in 2004. Taken with the Olympus C-5050 on a similar “test drive after I fixed something” drive in January 2009. This is my traditional turn-around spot on SR 530 below Whitehorse Mountain.