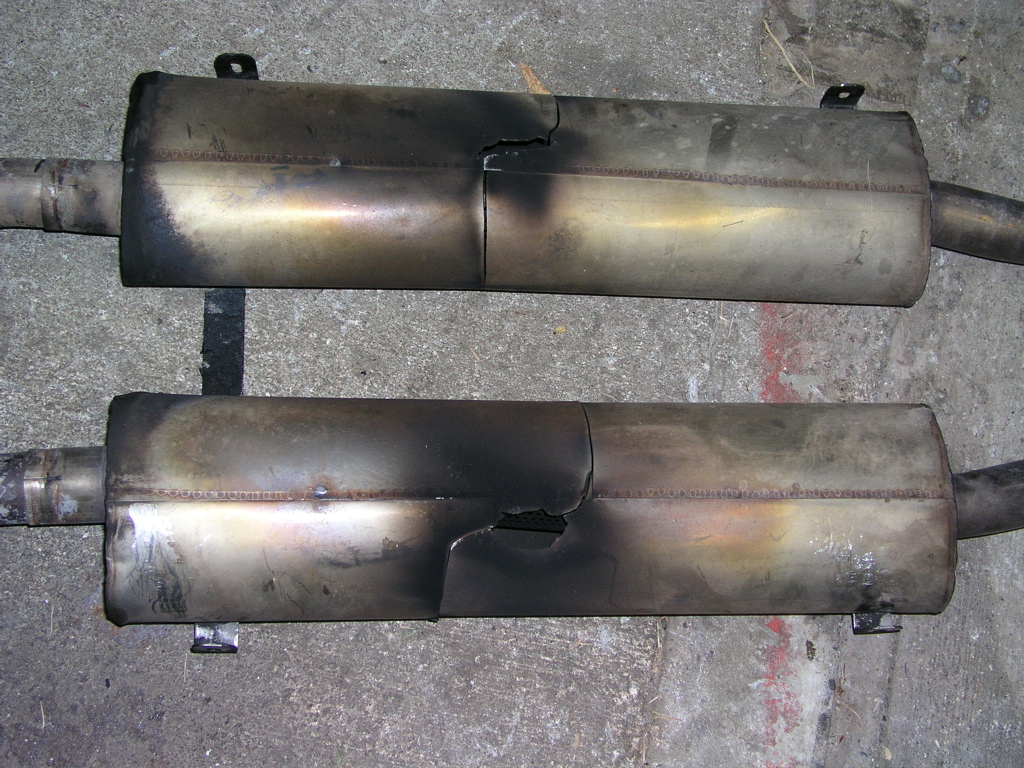 Well, it has become something of a tradition for me to spend my Super Bowl Sunday wrenching on my car. I’m not really a football fan, and to be perfectly honest if New York City & Boston somehow vanished tomorrow I wouldn’t miss them, or their sports teams. So I work on my car, or go skiing on this day every year. The weather in the mountains here has been crappy, so car work it is.

I finally decided to tackle the task of removing the exhaust from the old Jaguar. Since summer they’ve been rattling and loud. The driver’s side muffler has actually been leaking a bit for a couple of years. It was very mild at first… a slight puffing. At some point last summer it transformed into a dull roar with a rattling accompaniment. No longer was this Sir William’s 6th Symphony, it was as if Keith Moon was conducting the Coventry Philharmonic with his drum set with John Entwistle laying down the bass. Not the usual purring Coventry Cat to say the least.

Armed with a few wrenches, a pad to lie on the cold barn floor, some ramps & jack stands, a dead blow hammer, some moth balls, and a bad attitude, I went at the ratty old stainless steel pipes on and off over the course of the afternoon. In reality the bolts all came off with ease. The c-clamps as well. The driver’s side pipe came right out of the header as soon as it was unbolted. The passenger side however became a day-long test of will between me and the metal. I had to support the whole system with wood dunnage to prevent things from getting bent out of shape since the supports were removed, but damn… that pipe was STUCK!

I didn’t have any handy heat sources to help it along so it just required persistence. I am nothing, if not persistent. Eventually it popped off and I dragged the bodies out from under the car to find what you see above. In knew the straps were broken. I knew the mufflers were cracked a bit. I had no clue they were THAT BAD. Ugh.

The headers and resonators look great, though the latter are in dire need of polishing. The mufflers are quite obviously shot to hell. Another fine “TeamCJ” performance part dies a premature death. Speaking of CJ, all the sycophants tell me all the time that Dan stands behind his product. I recalled that Dan Mooney of Classic Jaguar did tell me that he WOULD have considered honoring a warranty if I had given him first crack at the engine when it failed, so I figured what the hell, I’ve got nothing to lose… and sent him an email Monday with a link to these pictures and a note telling him that no other shop had touched this exhaust but his. He replied:

As a point of order, you are not now and have never been a customer of Classic Jaguar. To the best of my knowledge, you have never spent a single penny with Classic Jaguar. Furthermore, given your inaccurate, insulting and grossly misleading Internet rants about Classic Jaguar, I hardly feel inclined to assit [sic] you with any problems you may have with your car.

Hrmmmm… I seem to recall reading this on their website:

“Team CJ components are the highest quality, most thoroughly engineered performance upgrades available for your Jaguar. We have invested thousands of hours of research and real world testing to ensure that our components are safe, practical, durable and easy to install. Your satisfaction is 100% guaranteed. Such is the confidence that we have in our products, many Team CJ components are guaranteed for life!”

I guess there is sales speak, then there are weasel words.

By the way, I might cop to insulting. But I’ve never been inaccurate or misleading in any way. All I’ve done is lay out the photographs and text exactly as they’ve happened. Grossly under spec parts, shoddy workmanship, cut valve stems, cheesy “uprated” parts that have failed far sooner than factory originals. These are just facts.

Classic Jaguar charging many, many thousands of dollars to rebuild an engine and then finding this inside? That is insulting Mr. Mooney.

You see, I am nothing, if not persistent.

10 thoughts on “How I Spent My Super Bowl Sunday”