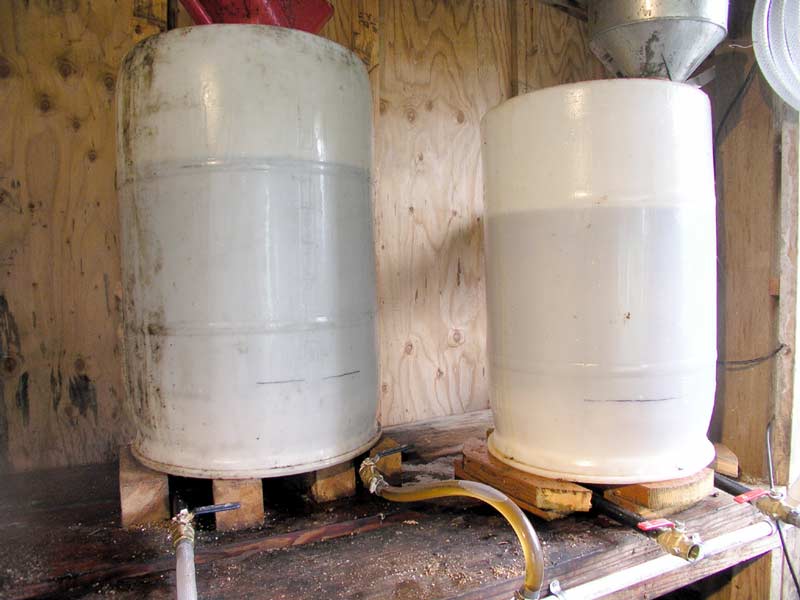 The first step in making BioDiesel is collecting your “feedstock”… that is the vegetable oil used to make it. I use Waste Vegetable Oil (WVO) from restaurant deep fryers. It is darn near impossible to get it from around home, as there is a commercial BioDiesel producer within 10 miles of my house who has locked up all the local sources. Instead I collect it closer to work. Right now I have two sources, which are part of a small cooperative really. My friend John, who I met when he replied to a job I posted on Craigslist many, many years ago, and a new source Mike, who I met via the Northwest BioDiesel discussion mailing list. Both of them supply me with waste oil, and in return I supply them with finished BioDiesel.

John first turned me onto the idea of running the car on veggie oil. At first I did straight veggie oil in the car, mixed with petroleum Diesel. I built a two-barrel WVO filter setup that was completely gravity operated. For a year or two I just filtered the oil down to 1 micron (which took a lot of time BTW) and poured it in my tank at anywhere from 10% to 50% mixture based on ambient temperatures. This worked OK for a while, but did eventually clog one of my injectors. This, and the rising price of oil, is what prompted me to go 100% BioDiesel.

So step one is still filtering and settling. However unlike the old days, I don’t have to be so anal in my filtering (that still happens, just later.) Now I collect the oil, which comes to me in 5 gallon buckets, and pour it into these two tanks you see above. I can filter/settle close to 100 gallons of WVO at a time here. Time & Gravity are my main tools. The oil goes into the top via funnels. Attached to the funnels are coarse filters which remove the larger food bits (whole fries, potato bits, etc) from the oil. I use paint strainers, old panty hose, socks, whatever. Panty hose is actually the best. The filter media eventually clog with sludgy gunk, but we’ll worry about that later. Once inside the barrels the oil sits for at least a week, preferably two weeks. As it sits the water that was in suspension falls to the bottom of the tank. Suspended food particles also sink.

You will note that the barrels are upside-down, with the dual-bung tops now on the bottom. Into these bungs I have plumbed two NPT-threaded 3/4″ pipes with ballvalves on the end. One has an extension that sticks up into the oil to the level of the line you see drawn on the front of the tank. The other is flush with the tank’s bottom. When I draw off oil I use the higher of the two pipes. This means I draw oil from the area above the sediment. I can drain off the water and sediment using the bottom/flush pipe. This stuff is unusable and is discarded. The oil goes from the settling tanks straight into the BioDiesel reactor. 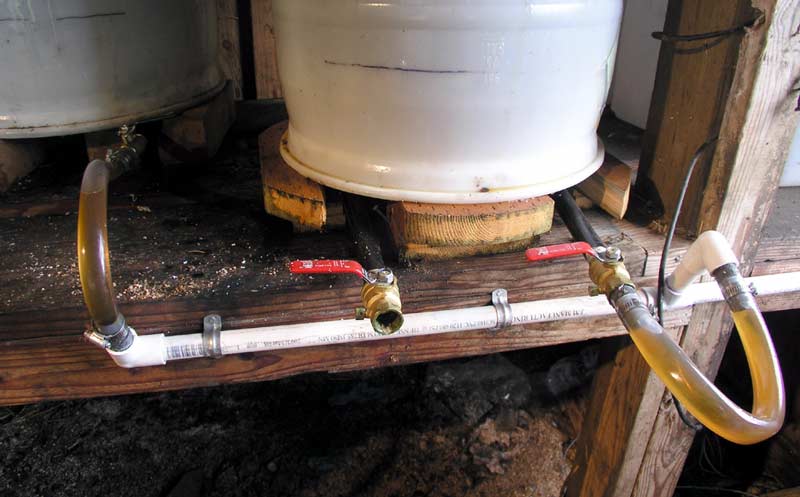 Up until last week I used a removable hose to drain the oil from these tanks. The hose screwed onto the ball valves you see on the end of the pipes. Last week I finally installed some plumbing to make this operation a lot cleaner. Now I’m not dripping WVO as much. I can just open some valves and flick on the reactor’s pump. Oil just flows into the reactor vessel without getting my hands dirty! (There are still some hoses to connect, but these are further downstream.)

So the key here, and the key overall to this whole process, is time. The longer the WVO sits, the better and cleaner the oil becomes. I alternate which tank I use every weekend, allowing the other to sit another full week to settle. I come close to filling each one every week, so the supply is consistent.

The next steps in the are testing & reaction, also known as “Better living through chemistry!”
Stay tuned for that.